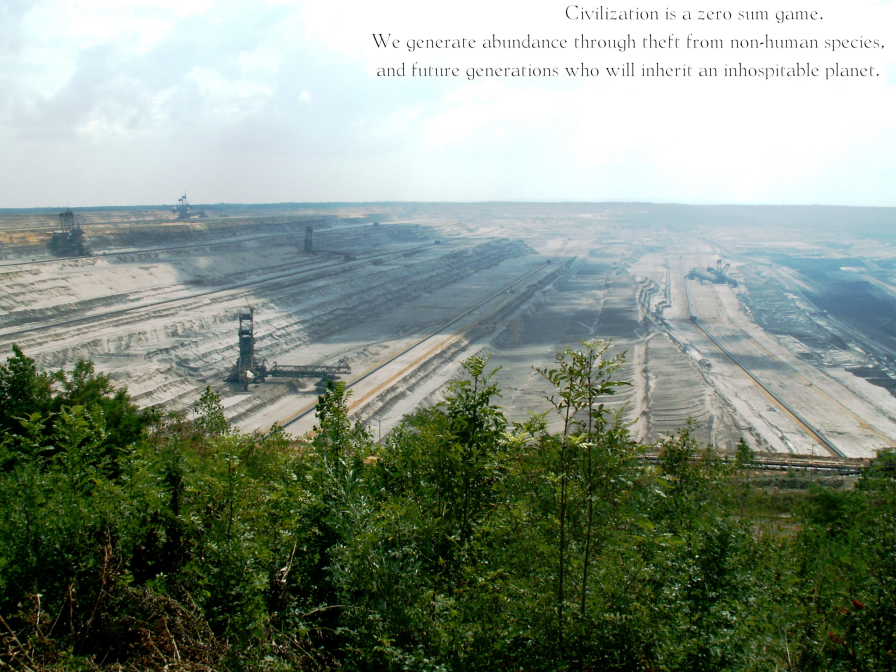 Two important points were brought up in Zero Sum Survival – Part I – bullets over beans, and sudden collapse. This post will be dealing with sudden collapse in more detail.

Sudden collapse is defined as civilization ending in a few months to a year or two from any kind of threat. A sudden collapse is among the least likely ‘event’ to happen to our civilization. This has enormous consequences for survival planning which I will attempt to outline below.

But that doesn’t not mean that human civilization will not collapse and fail. It most certainly will, because our civilization is intricately linked to the survival of the biosphere, and it is the biosphere that is now collapsing, it just won’t happen suddenly.

Most mammals, amphibians and fishes will die. Many already have, which is to say that the collapse of the biosphere is well underway now. Much and even most of the plant life on Earth will die as temperatures exceed the wet-bulb survival rates. This will not happen ‘overnight’ either. To assume so is to ignore seasonal variability. That cycle isn’t going to end – but it will get worse and worse, year by year. All of the normal seasonal cycles are being highly disrupted with both extreme weather events and temperature variability, but winter will still be ‘winter’ and summer ‘summer’. This will permit both plant and animal life some temporary reprieves from rising temperatures.

Even non-migratory fauna will continue to survive for some years to come. Farming and food production will still be practiced with declining yields and nutrition, year by year. Humans will increase their migration and mobility wherever they can, seeking out survivable regions and climate. But over the years, it will become very apparent that biological survival will be increasingly difficult – and then impossible as food systems fail all over the world.

But even these systems won’t fail all at once overnight, and this is the primary reason why the ‘sudden collapse’ is a false meme. The Earth has tremendous resiliency, and so does human civilization. Even if civilization were to run out of oil ‘suddenly’, life would still be possible for quite some time. Millions, then billions would starve, but millions could still survive – as long as their temperature fluctuations and seasonal variability still permitted food production.

Hollywood always chooses the ‘sudden collapse’ scenarios to entertain, but grossly mislead viewing audiences. Notably, none of their scenarios, which are pure fiction, have ever come true. Nor are their portrayals of human behavior accurate in ‘collapse’, which I partially covered in Part I.

It is now apparent, to me anyway, that there is a gross misunderstanding about how collapse of human civilization will occur, and is occurring right now. It won’t be sudden. And there won’t be hordes of people attacking and killing other people either. There won’t be the ‘roving gangs’, or fire-fights written into poorly conceived scripts, or desperate ‘post-apocalyptic’ predatory dog-eat-dog survival memes. These are entirely imagined and falsified scenarios that have no reflection on historical events, human behavior or systemic actions that will be taken.

To find reliable evidence of how humans ‘survive’ in real-life collapse situations, where life is was near-impossible and extremely difficult, we only need to examine historical events. What you do not find in significant numbers is the Hollywood (or ‘prepper/survivalist’) portrayals of predatory actions, ie., human gangs (or individuals) ‘preying’ on everyone else. The opposite is actually true – humans come together to help, assist and provide wherever they can. They eventually suppress what predators that do arise, but these are far more rare then common.

We all intrinsically know that we are all better off by cooperation with each other and that is exactly what human history portrays in far greater numbers then the predatory activity imagined for the future by so many. There is no valid reason therefore, to assume that we are going to act any differently as our civilization continues to crumble.

It’s stunning that so many people, including myself have missed this critical point. But as I consider what I’ve published before, and what I have learned since over many years, I have now come to reject the notion of ‘survival hordes’ and all that comes with it – roving gangs of predators, lone-wolf ‘survivalists’, houses being raided, stores being ransacked, houses being looted and so on. None of this fits the human behavior patterns of the past in a predominant measure. That means that when this has happened – it’s been the rare exception – not the majority.

Here’s what I think then will happen: As climate change destroys global food systems, increase monitoring, security and distribution will be enforced globally. Massive refugee centers and forced migration will be setup. Food distribution and production will be tightly controlled. Lawless behavior will undoubtedly increase, but it won’t be anything like what has been imagined.

Violators will be dealt with. Increasing levels of hunger and starvation will not lead to roving gangs and the confiscation / theft of food on a wide scale (this won’t be allowed by anyone). You will still be relatively safe in your own home. We will be forced to cooperate and work together wherever possible. Conflicts will undoubtedly arise over water (critical) and food (also critical) and energy (also critical), which will result in various stages of organized conflict (military action), but civilians will not be directly involved (left on their own) as imagined. They will be the recipients of food production, distribution and security efforts.

This is VERY different then what most people have imagined for the coming conflict wars. It means that we are all going to suffer – and die together, slowly. This is what we’ve always done. The Mad Max ‘gangs’, the lone survivalist, the hard-core individualist armed to the teeth will be suppressed from harming the rest of ‘civilization’ (or whatever still remains) as long as possible. This is one of the least likely things to happen, yet has figured prominently in survival plans and Hollywood money-makers.

The scavenging and foraging about in abandoned houses, killing each other over bits of food and water, is all imaginary bullshit. At worst – those desperate individuals will avoid each other, because it will be far too dangerous to go “one on one” in a pointless firefight for questionable nutrition. By that time, there would be no doctors, no medical care, no wound treatment and almost nothing worth fighting over still left.

Far more likely at that distant future point in time – those survivors would have long since realized that they have to pull together to provide for the basic necessities of life (water, food, shelter, security) and IF there were any predatory people still around by then – they will simply kill them all because they would present too great a threat. They would not be tolerated (just like they are not now). That is a basic concept that is never going to change – and is grossly overlooked by everyone.

Humans are going to opt for ‘group survival’.

Society and civilization is ‘self-protecting’ and ‘self-correcting’ and will not suffer attacks from within or without indefinitely. It never has. Nor will it devolve into a ‘every man for himself’ scenario quickly either. The ‘collapse’ will be slow (but faster then it is now, right now we’re taking up the remaining ‘resiliency’ in the system).

Humans will do what they’ve always done – come together, again and again, in increasingly smaller groups as our numbers drop (die-off). The die-off of the human population will indeed still happen – just not like so many have imagined. We’re going to starve together as nutritional content of food drops, and our ability to grow sufficient calories and distribute them declines.

It would naive to not assume, as I’ve reminded readers before, that there won’t be conflicts, lone wolves attacks, riots and even a possibility of civil war. But none of these will be what brings down civilization (this too has never happened before). Society / civilization will always attempt to rebuild and pull itself together through cooperation, not hyper-individualism, and not through predatory activity against each other. Such activity will be the rare exception, not the rule.

Therefore, if this assessment is accurate, and I suspect that it is – the survival planning that many have engaged upon is fraught with dangerous misconceptions and even preparations. It exposes the “bullets over beans” as a bullshit zero sum survival strategy.

Humans have survived on this planet this long only by working together. As our numbers dwindle from the devastating effects of climate change on global food systems and regional survivability, we’re going to remember this, again and again.