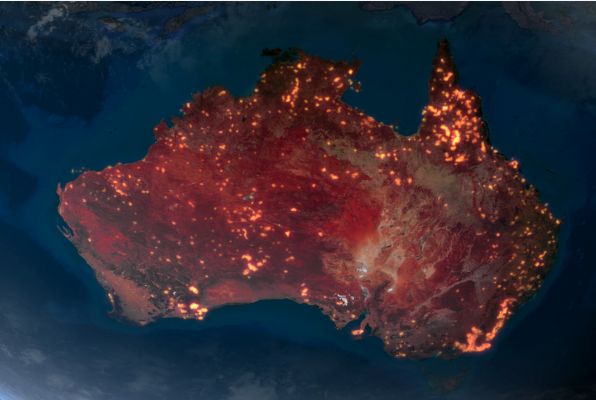 Amazon Prime has a video about the massive fires that burned Australia titled “Burning”.

There is plenty to learn (if you don’t already know) from the documentary, but they’ve got numerous facts simply dead wrong.

The film depicts the denial, ridicule and foot-dragging by the political leadership, even while towns and villages burned to the ground. Australia’s politicians and media closed ranks and pretended that these fires were normal, when they clearly weren’t. But where the film goes off the rails is the silly idea that Australia can “export energy” to Asia. Maybe this is technologically feasible, but why do it anyway?

And how can you mine all those critical minerals and process them into metals to build batteries and solar panels and infrastructure (and over 3500 kilometers of undersea cables, up to 50 of them) without burning petroleum to power the machinery that produces everything? They don’t talk about this glaring omission, or the refusal to just do less. If Australia exports energy, well goddamn, we’ll keep exporting energy even if it doesn’t make any damned sense!

I thought America had the dumbest politicians and media on the planet, but after watching this film, it’s pretty clear we’re tied for first place with Australia. How do these people rise into such positions of power and influence? Apparently the voting public is just as bad in Australia as it is in America. The worst examples of human leadership take the reigns. Doesn’t Australia have the courage to throw these people out of office (permanently)? They probably have the same problems we do here – and we’ve got all the guns.

It’s clear that a lack of courage and comprehension is what is lacking in both countries. Young people around the world are trying to gain political power to stop the unfolding madness, but it’s not actually working. Perhaps they should just stop participating in the future since they don’t have one anyway. Don’t fill any of the “jobs” or “careers” or positions for employees and workers, anywhere. Why perpetuate the status-quo when you have no representation? Why bother supporting a society and a civilization that has betrayed all of you? Why go to college and get a degree when all this does is to support a failed paradigm?

The real power people have is not in trying to “change the system” (which never works), but in abandoning the system. Internal reform simply doesn’t work; doesn’t self-correct and doesn’t actually solve root problems.

I can see this as a possibility, but I can also see this too failing. Enough brainwashed people would still trying to “get ahead” and wind up supporting the failing and oppressive structures that are destroying the future. But just imagine – if enough young people just walked out on society…. wouldn’t that be something? They could go off and try to carve out their own future and build their own world, one that does not rely upon the destructive and injust practices employed today.

Perhaps just a dream, but one thing is painfully clear to me after watching one massive failure after another for decades and decades – this isn’t working (and never will).

One thought on “You Should Just Quit”