This is an interesting article, that explains that we are now about one year away from global food riots – (these did happen, just not here).

What’s the number one reason we riot? The plausible, justifiable motivations of trampled-upon humanfolk to fight back are many—poverty, oppression, disenfranchisement, etc—but the big one is more primal than any of the above. It’s hunger, plain and simple. If there’s a single factor that reliably sparks social unrest, it’s food becoming too scarce or too expensive. So argues a group of complex systems theorists in Cambridge, and it makes sense.

In a 2011 paper, researchers at the Complex Systems Institute unveiled a model that accurately explained why the waves of unrest that swept the world in 2008 and 2011 crashed when they did. The number one determinant was soaring food prices. Their model identified a precise threshold for global food prices that, if breached, would lead to worldwide unrest.

I don’t think a lot of people have a frigging clue how unbelievably close to the edge we already are.  Civilization is all about food, having enough, getting through the next winter and planting season, surviving until harvest.  Everything that we know about democracy, freedom, justice, luxuries, comfortable living, even peace itself, is all based upon the resources and having enough to supply everyone.  Whenever resources are depleted, chaos and war, starvation, hunger, riots, conflict and violent competition occur.

This all goes to say that as long as climate change continues to advance—it seems that nothing can stop that now—and we maintain a global food system perennially subject to volatile price spikes and exploitation from speculators, without reform, our world will be an increasingly restive one. Hunger is coming, and so are the riots. 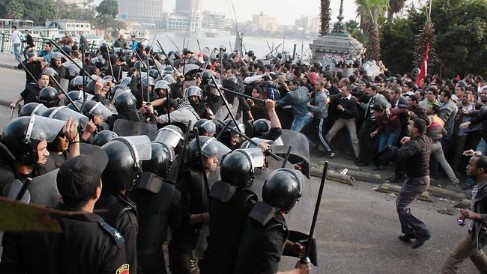 I’ve been doing a lot of reading lately.  This has spawned a lot of contemplation and consideration about what’s coming our way.

We’re “responding to illusion” when it comes to the safety level of our world today.  This illusion is being promoted by industry, media and government, who are extremely interested in maintaining the status-quo (which includes a lot of propaganda about how essential they all are).  This and what they do, must be protected — at all costs.

An awful lot of time, effort and money is being spent to keep doing “what we’ve always done”, the business-as-usual (BAU), “world as we know it” that we all expect.  Clearly, we are reminded daily just how necessary this all is (part of the propaganda at work).  Drone wars, for example, are now “essential”, although we’ve gotten along fine without them in the preceding millenniums of human history.  Not anymore.

Government largess, industry bailouts, medical protectionism and so many, many other “essentials” being propped up and promoted.  All very, very “normal” now, part of our society, part of who and what we are today.  All of it — viciously protected through propaganda, turf wars, embargoes, legislation and cronyism, simply means we’re going to “get what we’ve always gotten” and it’s going to be maintained and protected for as long as possible.  You could say that these machinations are virtually woven into the fabric of our society.

Once you understand this, then it is easier to figure out why we are not embracing essential and critical changes that would be better for everyone.  And why we probably never, ever will either.

This is the status-quo, a world — a nation that does not accommodate itself well to the rapid pace of external changes now taking place.  In fact, these changes are considered ‘existential threats’ and are often talked about in exactly those terms.

Part of these change (a critical part) is climate and the impacts upon agriculture, our just-in-time delivery system and the utter failure to prepare people for the impacts of failure.  That “failure” is now occurring, has been occurring, all over the world.

For the most part, the world is “responding to illusion” about how “safe” we are.  We’re not safe.  The illusion holds simply because we remain in the dark (purposely) about what is going on.

Very related: Growth Is The Problem by Chris Hedges.  Lays out the “illusion” pretty nicely.  “The government at this point exacerbates nearly every crisis the nation faces”.  Indeed it does.