Not everyone is aware that as temperatures increase, food crops will decline.

For a one degree Celsius temperature rise, a net productivity decline of global wheat yields between 4.1 and 6.4 percent.

That is actually a lot, if you compare to for instance the previous study we discussed that looked at the effects of a global average warming of over 3 degrees – still a very realistic figure for our current century, considering the actual global emissions trajectory since the Paris climate agreement. 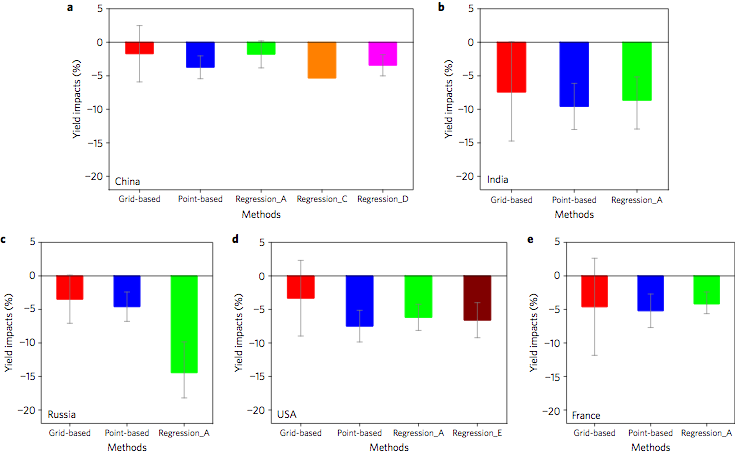 As the above diagram shows projected wheat yield declines under a 1 degree temperature rise occur in all the world’s major wheat belts, though the impact does seem to differ somewhat per either region (see China) or used method (see Russia).

Any wheat yield decline is also very significant for the global food supply. Most climate impacts studies still show stronger declines for tropical agriculture (where other staples are impacted) and combined with a steadily growing human population and their grain-consuming livestock. As a background trend more and more people become import-dependent on the global wheat belts, that are apparently also heat-stressed by climate change.

With the loss of many sea ports eventually disappearing from global sea level rise, and the rise in temperature affecting available global food supplies – how will the world ship critical food supplies to impacted countries?

Nobody has that answer. And the actual decline for crops like wheat might be absolutely catastrophic when temperatures rise 4C or higher.

Heat stress is the main concern (not precipitation), and it’s not just wheat that has this problem. It’s also rice, maize (corn), and soy – ALL of the world’s major food crops. Heat stress is set to create comparable declines in agricultural productivity in colder (subtropical and temperate) climate regions too.

“Global hot spots of crop heat stress overlap with important agricultural regions such as Eastern China, the Northern United States, South-Western Russian Federation and Southern Canada. This indicates that agricultural production in temperate countries may suffer substantial production losses from climate change (as for the A1B emission scenario used in our study), extending the findings of previous studies that impacts would mainly occur in sub-tropical and tropical regions…”

Different crop belts throughout the world are faced with individual challenges as climate-average temperatures increase, and extreme events increase. The ‘new extremes’ that have been seen throughout the world is what creates the most damage. This includes droughts, floods and storms, and heat extremes.

But there is a big difference between an August heat wave and one that occurs in June. This is a ‘thermal sensitive’ period in the growing season for respective crops and can cause increase crop failures. The younger a plant is, the more thermal sensitive it is.

This is now happening for all crop varieties, wheat, rice, soy, corn, with most of the affected lands found in the Northern Hemisphere (United States, Canada and Russia). For rice, Central Asia, South Asia and central North America have a high prevalence predicted. Rice and corn are expected to be impacted even more than wheat.

This represent the world’s most productive regions, which are predicted to have increasingly reduced harvests as the world warms. There is little room in the global food supply for this level of reduction in major food crops. The impacts will be felt world-wide.

In yesterday’s interview, I was asked about people preparing for climate change and my answer was the same as it has always been – they’re not doing it.

Hardly anyone seem to realize that future food production is highly threatened by climate change and food sales are (still) nearly zero (for any reason). In a time when the world should be on high alert and making emergency preparations for the world that is unfolding, it’s not happening.

I can only surmise as to “why” – lack of income, lack of awareness and lack of interest would the top three reasons I mentioned. No matter how often these warnings go out about future food availability, it just keeps falling on deaf ears.

Also worth noting: A 3 degrees Celsius warmer world is a world in which three quarters of the Amazon rainforest will dry out and die.

The pathway that we’re still on however, is 8.5C warming and even higher – so most of these studies don’t cover what that will mean. I have in previous blog posts – it means extinction. Of every living thing. But before that happens – we starve to death first because our food crops will fail world-wide. I cannot stress this enough – we are projected to die from starvation as the world passes through the wet-bulb temperate limits for plant respiration (also known as ‘heat stress’).