I have been without a functioning ISP for the past 24 hours due to a snowstorm. Not much snow, but it wiped out a lot of power in the area for some reason. So I got a ton of email all at once (doom news).

So here’s a quick update and assessment of what this means.

Scanning through all of this, I read:

Prepare Now For a 4°C Rise In Temperature (Climate News Network) – A “bleak future” is now guaranteeed for the human race because little progress has been made to slow global warming. We must “prepare for a world temperature rise of 4°C because scientists no longer believe that politicians are capable of holding the temperature rise below the internationally agreed limit,  2°C above pre-industrial levels.” Some parts of the world were already in danger of becoming too hot for humans to inhabit.

“Professor Maslin said: “We are already planning for a 4°C world because that is where we are heading. I do not know of any scientists who do not believe that. We are just not tackling the enormity of the task we face to keep it below the agreed 2°C danger threshold.”

The “most likely scenario now “is a 4°C rise in temperature. If we do not prepare to adapt we simply won’t be able to.”

A 4°C rise in temperature is not survivable.  I’ve covered this before.

“The Australian Government was ignoring climate change and still expecting places like Darwin to expand. But that was unlikely because they would soon become untenable.  “If employers ask people to continue to work in temperatures above 37°C, they will be killing them in increasing numbers,” she said.

Parts of Arizona, Australia and India temperatures were reaching – and for days staying above – the thermal maximum of endurance, which was around 37°C, the core heat of the human body.  Above that temperature, and sometimes below, depending on the combination of heat, humidity and air speed, keeping cool put too much strain on the heart and people began to die.

She said that she was studying how human societies could survive such daytime temperatures and continue to work. “There could be some night working, or people could work, rest in cool rooms, and then work again, but their productivity would drop and it would be economically unviable to have factories or farms in such conditions.”

Her researches were focusing on how to keep essential services like farming, police, ambulance, district nurses, construction and mining going in a warming world. “Obviously these people will be risking their lives if they continue to try and work outside when the ambient temperature is above 37°C,” she said.

There would be no food production. No ability to sustain the world’s billions, even if they could move someplace cooler.

With the UN climate talks in Warsaw at their mid-point, a fringe meeting is debating the future of agriculture in a warming world. A senior scientist tells the Climate News Network of her deep misgivings for the future.

World ‘neglects’ climate impact on food – LONDON, 17 November – Global leaders are failing to respond to the threat posed by climate change to the growing challenge of feeding the world, a leading agricultural researcher says.  They do not treat the problem seriously, and they are ignoring the warnings of science about what is liable to happen.

Yet, she says, there is much more evidence available than there was a few years ago, and the future it describes is cause for great concern.

“They’re not sitting up and taking notice of Working Group II of the IPCC. I know that what we’ll get from that this time is a much larger body of evidence than in 2007 on food production – and the picture is not rosy.”

China AND Japan have opted NOT to drastically reduce their greenhouse gas emissions, with most countries of the world, including the United States, continuing to pretend that it’s not that urgent. Australia is even worse, despite epic floods, fires, heatwaves and droughts.

Do not expect ANY political leadership to “solve” the unfolding disaster, it’s very clear they are quite incapable of doing so.

Perfect Storms like Haiyan and Sandy will become ‘normal’

Allegedly, we are expect to ‘adapt’ – but this presumes quite a lot – such as available land locations, food production, migration, energy supplies and even the overall “survivability” of wet-bulb temperatures that will kill off all animal and plant life.  The notion is quite ludicrous and “adaption”, once thought as being perfectly possible for the world’s billions – becomes factually false.

Preparing for Hell and High Water only admits that “adaption will be global“, but hasn’t actually reached the stage of whether “adpation is effective“.  That is a euphanism for “survival”. 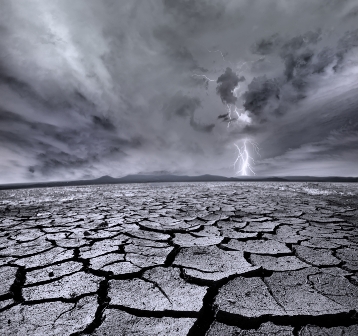 We now know enough that there is simply no possible way billions can survive the next 50 years. Unbelievably, the science is slowly catching up with the larger assessment of the current state of the world. This may seem puzzling or even counter-intuitive, after all, doesn’t science lead the way as the “best evidence we have” for the state of the world? Yes it does – if ALL the facts and data are correlated and combined and presented with complete honesty.

This is where “extinction” and the now vogue term, “near-term extinction” steps in. There is simply not enough factual evidence that humans can really survive what is now known now to be an absolute certainty. No food and either no water or too much water.  Extreme drought, floods and violent storms. Billions having to relocate – using and consuming precious resources in an attempt at ‘adapation’.

The reality is we stand little to zero chance of long-term survival even by adaption. Only short-term survival becomes possible (less then a single generation). The reason is we will consume all food production faster than it can be replenished.  Famine and starvation, sickness and disease will result – while more violent storms impact all other fields of production. Die-off is the result, with the world getting hotter and hotter each passing year, with less and less food. It is a vicious, unforgiving cycle that will reduce humanity quickly.

Adaption presumes we can go on feeding ourselves, but how? With air-conditioned greenhouses on the surface, while we live below? How long could that be continued? And what about breakdowns, energy shortages and failures?

The startling truth is if we lose the surface of the Earth to habitability – we’ve LOST the game, completely and forever, as far as humans (and all present life forms) are concerned.

And THAT in a nutshell – is what is unfolding right now. An uninhabitable Earth.

I could give you a ‘what to do’ list of things humanity could do. And especially what YOU could do, right now. Believe it or not, that’s already been done, right here on this blog and on many other sites. But it wouldn’t change the outcome any, because we’re all in this together. And what needs to be done, RIGHT NOW is so drastic, so all-encompassing, and so disruptive to life as we know it today, that it will simply be rejected out of hand and ignored despite being the only possible “chance” humanity might have. We are not going to take this opportunity to ‘save ourselves’. I’m going to simply go on ignoring all such claims, becasue they are completely without any merit or evidence.

This is exactly what is happening if you’re paying attention to the glacial progress of the world’s climate negotiations despite increasingly dire warnings from the world’s top scientists – as we inch close and closer to absolute disaster, the politicians and industry just go right on ignoring this global catastrophe.

All YOU can do now is prepare yourself for massive food shortages, water shortages and extreme weather events (including droughts, floods, hurricanes, tornadoes) and the resulting SOCIAL CHAOS that will come with this. It’s not a “fix”, let’s all admit that. It’s only going to help when it’s needed, but it is not going to avoid anything for anybody anywhere.

And you can prepare yourselves to die. But I caution everyone first and foremost, learn to live first, so that in dying as we all must, you will have actually lived. Don’t be a useless, brain-dead connedsumer for example, stupidly supporting more wars, oppression, slavery and deceit. Live conscientiously and with purpose and reason beyond self. Make a contribution to the other life around you – whether animal, plant or human. The miracle of life is far above and beyond our passing attention spans. We’re all badly distracted from the truth here.  Our existence, our life, the opportunity to even be alive, is an absolutely incredible event. But this is not limited to humans only, this truth extends to all living things throughout the entire biosphere. All things that live are amazing in reality.

We’re much too quick to extinguish life for the sheer pleasure or the arrogance or the hatred that we possess. It’s why the planet and the biosphere is in peril. We take, take, take, never deeply considering that the life we are taking for our use and pleasure, is just as amazing as our own life really is. It’s incredible that any of us are even here to experience this, but it’s also just as incredible that anything else that lives is even here. The Universe is a hostile place full of deadly radiation, airless vaccum and is utterly, utterly hostile to life.  And so is MUCH of the surface of this planet. We live at the bare minimums of the habitable zone, but we’re here.  We’re still alive, despite our incessant and constant abuse of the biosphere year after year, and our gleeful willingness to tread down and extinguish everything else that gets in our ‘way’.

It’s not the way to live and cherish life – and never, ever was.

So make the most of it, using the time that you DO have left with meaningful purpose and reason. The life that you STILL HAVE needs to be ‘spent’ wisely. It is after all, all that anybody on the entire planet has really got, and all that you ever had anyway. The tomorrows that come are not a guarantee that we will still be here, that you will still be here. So make the most of what you have, right now – at this very moment, and do that every moment of every day that you have left.

You can do no better than this, not in any philosophy or any religion or by any measure of how you should live.

The life you have is the reason to embrace this life despite whatever comes.

4 thoughts on “The Uninhabitable Earth”