Yemen doesn’t get a lot of news in the American press. But the number of dead, dying and starving in Yemen is absolutely enormous (millions – as in at least 22 million who are afflicted). And much of the fault lies directly upon the United States.

Note that this is the very same crown prince Mohammed bin Salman that recently had the journalist Jamal Khashoggi murdered that Trump is protecting. For Trump, it’s all about money, never mind the untold suffering of millions of people dying from starvation and disease. 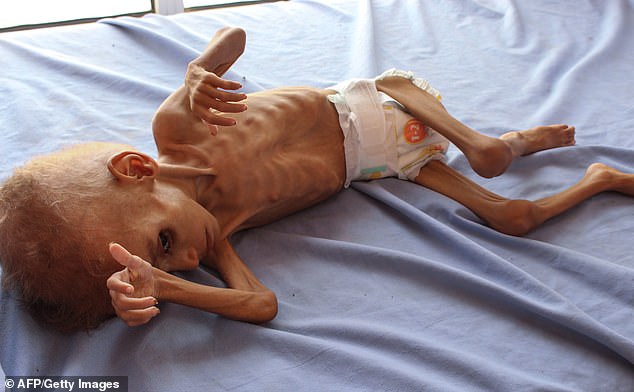 See this link for photos that will make you absolutely sick –> Yemen children starving to death.

The United States is guilty of genocide – again. And once again, a U.S. President, just like all the Presidents before him, is supporting horror. Millions of people, all over the world, have suffered at the hands of U.S. Presidents, again, and again and again. We should all be questioning “Why?” and doing everything we can to put a stop to this. They’ve all been deified as something representing gods, but none of them are. They’re all deeply flawed men – with blood on their hands.

Today is the day when they stick President George H. Bush into the ground. The media is falling all over itself trying to create the false narrative of how great Bush was. But I do not remember him this way at all. I remember Bush the Senior as being a monster, and so do these people:  GEORGE H.W. BUSH WAS A TERRORIST, NOT A HERO

Many Iraqis see a direct connection between Bush’s 1991 intervention, the US-led invasion overseen by his son 12 years later, and the country’s poor state today.

“It’s Iraq’s bitter destiny that the country’s ruin and the destruction of its infrastructure was all tied to the Bush family,” said Jamal al-Itabi, 70, tears welling up in his eyes.

“We only remember him for death, pain, sadness, starvation, the destruction of infrastructure. Iraqis under siege ate dirt because of him,” said Itabi.

“Then he sent us his son to occupy the country and sow the chaos that we still see today.”

We all know (or should know) that his son, George W. Bush was even worse as a President and a murderer, with even more blood on his hands. Quite frankly, he should be planted in the ground too, but not before he’s been prosecuted for his war crimes and leading this nation into two wars on phony pretenses, convicted and given the death penalty along with all of his cohorts.

The United States makes war. Profits from war. Engages in war – all over the world, in an endless bloodbath of supporting death and destruction. Yemen is one of the more recent examples, but it certainly won’t be the last. Too few voices care, too few are trying to stop this slaughter. Why is that?

The real legacy is us and how we are also complicit to murder.