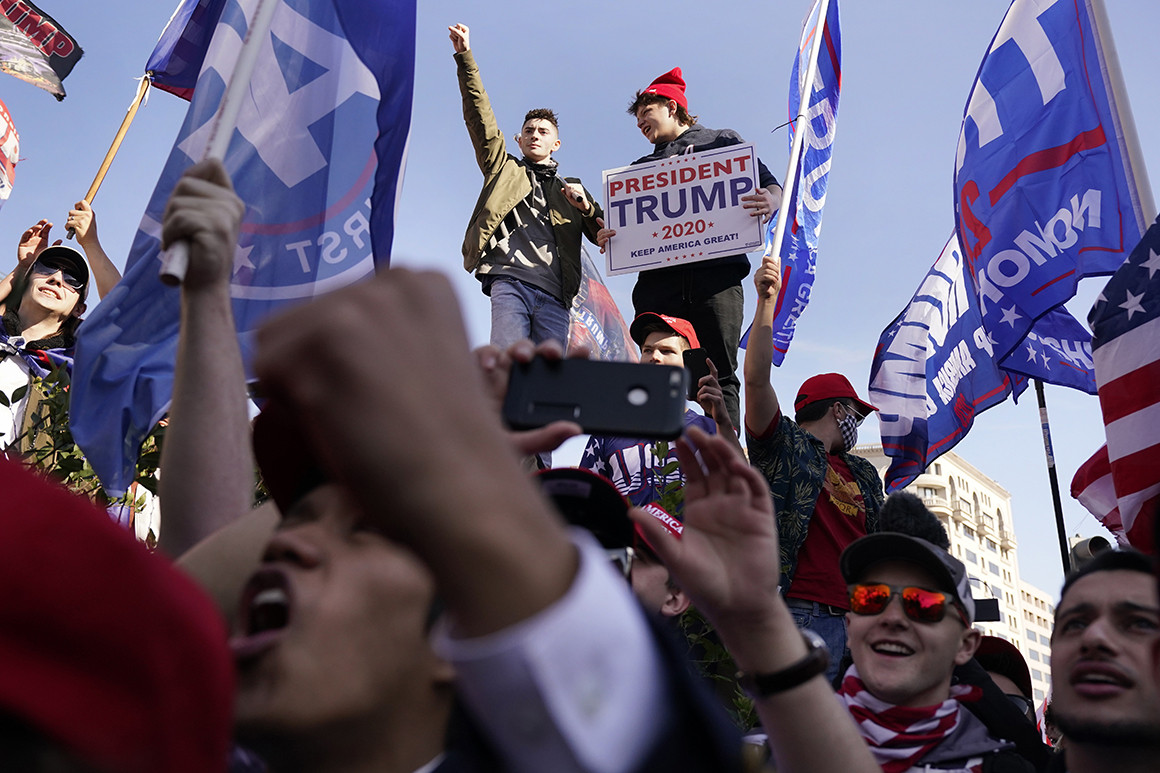 This is very interesting:

In terms of the larger picture, at least three allied European intelligence agencies believe that Trump fomented the mob because he could not get the military to assist him. They have suggested there was at least some degree of collusion with federal law enforcement. Given how fast the Capitol Police chief resigned and left the building, there’s some credence to that. Second, that view is reinforced by a former senior official on Trump’s National Security Council — Fiona Hill, whom everyone should recognize from the Russiagate testimony she gave. She believes that Trump was consciously trying to trigger a coup using the military, and that the intervention from 10 former secretaries of defense may have prevented it.

We now know that the Republican Attorneys General Association sent out robocalls the day before, encouraging people to descend on the Capitol. Republican dark money financed the rioters, gave them bus tickets and chartered the transportation.

War-like imagery has begun spreading in Republican circles after the attack on the U.S. Capitol by a mob of President Donald Trump’s supporters, with some elected officials and party leaders rejecting pleas to tone down rhetoric calling for a second civil war.

In northwestern Wisconsin, the chairman of the St. Croix County Republican Party was forced to resign Friday after refusing for a week after the siege to remove an online post urging followers to “prepare for war.” The incoming chairwoman of the Michigan GOP and her husband, a state lawmaker, have joined a conservative social media site created after the Capitol riot where the possibility of civil war is a topic.

Phil Reynolds, a member of the GOP central committee in California’s Santa Clara County, appeared to urge on insurrectionists on social media during the Jan. 6 attack, declaring on Facebook: “The war has begun. Citizens take arms! Drumroll please….. Civil War or No Civil War?”

Hmmm. We also know that oil companies fed funds into the “StopTheSteal” campaign.

The fossil fuel companies will presumably be reexamining donations to politicians who supported the “Stop the Steal” movement to overturn election results. Some 139 U.S. representatives and eight senators voted against certifying President-elect Joe Biden’s win, including lawmakers like Sen. Ted Cruz, R-Texas, who has received extensive contributions from some of the oil and gas companies now denouncing the Capitol attack.

One thing probably does not (necessarily) lead to the other, so don’t make a false connection. But – as we have seen in recent days, there is a LOT of culpability with American companies supporting the big lie about the election. Moreover, foreign money connections have now also been uncovered, including large anonymous payments made through Bitcoin to some of the attackers.

The “attempts at apologies” we are now seeing are duplicitous at best. For me, they’re worse then useless, I do not trust these people or these companies, or these actors one bit. We all know where this was headed, and they deliberately fanned the flames, with some of these people even participating in the attack.

At least two of the attackers are now asking for a Presidential pardon (which won’t be forthcoming) as they find their lives utterly ruined now by their actions on January 6th. I hope they throw the book at them. Accountability serves justice.

Anyone that has taken “sides” on the attack is being put into one of two camps: For or Against. They’re either traitors or traitors (depending on what side you are personally on). But this sort of division has been going on for over a year as COVID-19 revealed the dirty side of Americans. Example:  Republican state senator labels two elderly women ‘filthy traitors’ for trying to save lives

When you consider that 2/3 of the House Republicans STILL tried to nullify the election results AFTER the Capitol attack, it’s plainly clear that we have real traitors in high office. Nobody should consider this strange that they are all Republicans. They all sold out to the Trump cult and made that very, very clear early on (4 long years). Trump SHOULD have been removed from office in his first impeachment, but the traitors refused to do the job they were hired to do. And now we see the results of failing to reign in a lawless and corrupt President. And amazingly, they’re STILL refusing to do their jobs. The 25th Amendment should have been a forgone conclusion for Trump’s immediate removal, but that didn’t happen (setting up an exceedingly dangerous precedent). We CLEARLY have numerous traitors still in office.

It is my opinion, that the US government, specifically the Executive and Legislative branches are deeply compromised, with active traitorous activity still occurring. We’re days away from a new Administration – but never, ever forget that these traitors are still in office and need to be removed immediately.

So when I get wind of a attempted military coup and collusion with politicians and law enforcement, it is absolutely not hyperbole. Something far more is going on and frankly, I think it is treasonous activity emanating from the White House and supported by traitors in office and different employees working for the government. They really did try to overthrow the US Government and illegally install Trump back into power.

I have no idea how they imagined they would get away with it, I doubt the country would have accepted this (I would not) and they would have had their civil war anyway. But if they had the military in their pocket, and enough traitors in office – they could have done it. It would have been a done deal and then a real civil war would have started.

These traitors, every last damned one of them, need to be hauled out and prosecuted. Those that participated in the attack, knowingly or otherwise, need to be prosecuted. Biden just might be keeping his tongue until the Chief Traitor is finally out, we’ll see. But the police and the FBI and every other law enforcement agency around the country is taking a hard, hard look at this. I think they will find money, collusion, planning and traitors everywhere.

I’m still stunned that Trump supporters could be this stupid. To support such a vile, despicable and evil liar, who literally throws everyone under the bus. Many of his base still refuse to believe he lost and still cannot see Trump for who he is even now. That does not make them traitors, but those that support the Capitol attack even if they were not there, most certainly are.

Even more bizarrely, MAGA activists plot revenge on Republican ‘traitors’. It’s hard to even guess what these idiots see in a mirror. It’s not reality. But I know what the rest of America sees – traitors. Loyalist to a cult leader. Irresponsible, unethical behavior. Racist asshats. White supremacist and every other form of despicable scum. Lawless idiots that think belligerence and armed threats will change the country to their demands. And now they’re trying to devour their own. So does this make them cannibals? These people do not represent the real America. They represent the worst in America. Unstable, irresponsible idiots.

If you want a new form of government, you can have one – you can vote for starters. You can also engage in non-compliance. We are not at that point where we take up arms and force our demands upon our government (not even close). THAT should be reserved for such a time as when our lives are being directly endangered. People that are dying for their ideology are not dying because their lives are being endangered. They’re dying for nothing. Those that died in the attack, except for the Capitol police officer, threw their lives away for nothing. And those that are now being identified and prosecuted have thrown their lives away too. I do not have any sympathy for any of them, they brought this all upon themselves, and we cannot trust them, or anyone who supports the Capitol attack ever again.

There is a push for a “Million Martyr March” honoring Ashli Babbitt (the women who destroyed her family) because of her warped ideology. Babbitt is no hero, nor a martyr, she was a fool who breached the Capitol and illegally attempted to enter into a secure area. I do not have any sympathy for her – but I do for the family she left behind. She was stupid, and got herself shot, which is entirely her fault. If a terrorist had done the same thing – the shooter (we don’t have his name yet) would have been hailed a national hero. This is what happens when you act with stupidity and violence – you can get yourself killed by those who are doing their jobs.

“If we must, many of us will return on January 19 carrying our weapons, in support of our nation’s resolve, to which the world will never forget,” he wrote. “We will come in numbers that no standing army or police agency can match. However the police are not our enemy, unless they choose to be!”

He added: “All who will not stand with the American Patriots … or who cannot stand with us … then that would be a good time for you to take a few vacation days.”

Go for it dipshits. You’re not going to accomplish diddly squat except make yourselves look still stupid, uninformed and dangerously evident that it’s time we disarmed you idiots.

I do not support “armed protests”. Intimidation with deadly weapons is not “protesting”, it’s engaging in threatening behavior (and it is illegal). If you bring a gun, or even draw a weapon, you damned well better use it, otherwise, leave it home and keep it out of sight. You are not police officers. You are not authorized law enforcement. Go ahead and protest, but the thinly veiled threats that you’re going to win this battle is a call for insurrection and sedition. It’s time to prosecute these assholes.

Who loves America? Inciting a riot to sack the Capitol gives us the answer

A premeditated lie lit the fire – Told you so, it was his plan all along.

5 thoughts on “Traitors In High Office”