“Lack of education, cost of healthcare, childhood obesity and teenage pregnancies put the life chances of American children at the bottom of a table of overall well being – far behind those from poorer countries, a damning report has found.”

“UNICEF ranked the U.S. at the bottom of a league table of the best places to raise a child”: 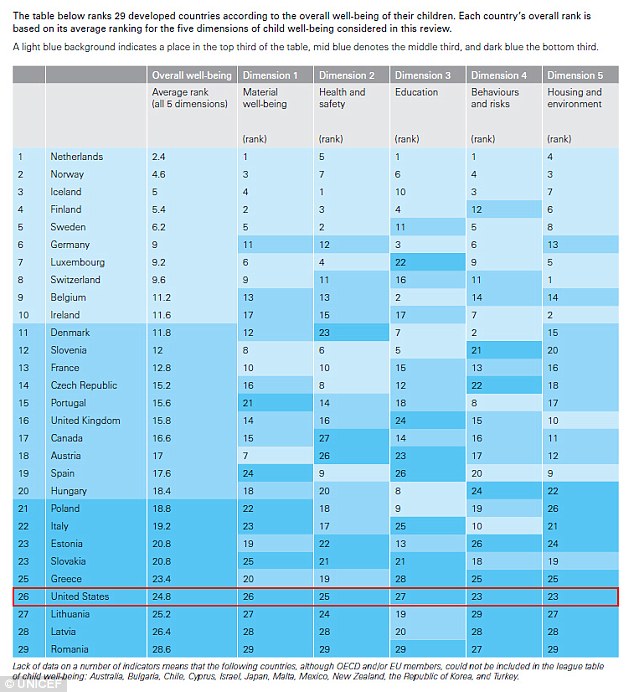 “Despite being the seventh richest country in the world, the U.S. had some of the worst rates for teenage pregnancies, homicide and childhood obesity.”

There’s much more to absorb here, Why it’s better to grow up in Slovenia and Greece than the U.S: Childhood obesity, poor education and homicide rates put America 26th out of 29 nations in survey about best places to raise a child.

The Daily Mail is generally pretty useless for unbiased reporting, but this report is from UNICEF and ranked 29 (developed) countries, so take that for whatever it’s worth.

I’m old enough to have children and remember very well how much I’ve seen “disappear” in my lifetime. This is definitely NOT the same country I grew up in. It’s far, far more dangerous now. Most places I enjoyed are paved over or built up with strip malls, housing developments or roads. The environmental side of things is significantly worse, however the report is focusing on the people side of things.

It’s not safe to let your kids play alone anymore, or ride their bicycles to the store like I did. Or even go to a public school.  Or wait at the bus stop.  Or go out on a date without clearly knowing that the other kid(s) they are with is safe, smart, street-wise and drug-free. Date rape is a HUGE problem here, something that never happened in my era.

America has declined precipitously and is seemingly searching for the absolute bottom.  I’ve seriously thought about leaving for greener pastures from time to time — and have also often thought “I’d never have children” in today’s world if I could do it all over again.  These thoughts or similar ones have probably crossed other parents minds as they survey the wreckage of the American society.

I know that I seriously miss the wonder of the world that I had when I was young.  The sheer joy of being free to go where I pleased and do what I wanted. Like most, I wandered around during my off-hours from the prison camp (public school) and my summers were filled with backpacking, camping, fishing, hiking, biking, spending time with my friends, building forts and growing up in a safe, rural environment.  It was fun to say the least, a time when I never feared for my safety or that of my friends, when there were few to none (known) pedophiles around, when parents looked after other kids and intervened if necessary, when doing the right thing didn’t land anybody in jail, when cops themselves were far more honest, trustworthy and worthy of the badge they wore.

You could get in trouble and get a ride home in a squad car for some juvenile infraction and be deposited before your parents with an explanation of what you’d been caught doing.  Not anymore. Draw a stick army figure in kindergarten and get arrested. Run around the playground playing cops and robbers and get arrested. Now our schools have armed guards, metal detectors, routine locker searches and drug dogs.  We used to practice earthquake drills, now the schools practice school shooting drills.

America is clearly insane.  I’ve said this before and I’ll say it again.  It’s been poisoned from within, and has self-destructed what made it beautiful, safe and something to look forward to.  Now, it’s fearful, afraid, reactive, angry, violent and deadly.

I’m older now, a bit wiser and see nothing ahead but “more of the same, only worse”.  Why is that?  Because we Americans have continued, without fail, to choose the lesser path. The path of instant gratification, materialism, dependency and ignorance.

We can only blame ourselves, nobody else is responsible for what we have become.  This isn’t a popular sentiment, but it’s true nonetheless.  While other nations have managed to improve themselves in many ways (health, education, employment, happiness) from decades past, we have gone in exactly the opposite direction.  American political leadership seems hell-bent on running this country into the ground, there seems to be no end to their incredibly stupidity, arrogance, indifference and oversight.  They intend to micro-manage the lives of everyone now, down to the smallest, most minute detail.  It’s truly unbelievable what we’ve allowed to happen — but I reiterate in the strongest possible terms — this is OUR FAULT because we allowed this to occur.

It’s our country too — always has been since we stole it from the natives.  We’ve allowed ourselves to decline in precipitous, dangerous ways and it’s still happening, faster and faster.  Culturally speaking we are an absolute disaster in my personal opinion, a nation of scared, fearful sheep who refuse to wake up to their predicament.  I have no good words to share here on this topic because I see little cause for celebration.  We are not what we were, measuring in my own lifetime, we’ve degenerated an incredible amount.

Raise kids here?  Probably a bad idea, unless you reject the overall culture that envelopes you and your family like a suffocating cocoon, strangling out personal freedom, liberty, choice and responsibility.  But this isn’t a solution, it’s a Band-Aid for a monumental problem.  It’s what I did (home schooled) and I don’t regret it, but it’s not a fix either.

I honestly, in all truthfulness, see no fix. It does not exist because we lack everything that it would take. It’s far deeper then a political problem, such as a new leadership or new government (desperately needed now), it’s a people problem. The root of the problem lies within us. The people seriously lack the desire now to change for the better in lasting, meaningful ways.  The decades of propaganda have birthed at least two entire generations of people that wear blinders to reality.  They’ve become enamored with phony promises of the “good life” and false freedom (to buy useless shit) and what it means to even be an American (wage slave, working for a faceless and most likely, war-making parent corporation).

Not all of us, but enough of us to completely change the culture and fabric of the entire nation for the worse.  An endless stream of handouts and “benefits” are expected, remaining completely dependent on your government is considered “normal” and a God-given right. The good life means a steady welfare check for millions. Single-parent households is no longer frowned upon, popping out babies at 14 and 15 years old and living in your mom’s house past the age of 21 is very normal now. The highest aspirations many have is to be drug-dealer, basketball star or “assistant manager” at a fast-food joint.  Our expectations are deplorable, self-destructive and degenerating.

Of course, this is stupendously crazy, the reality of what we actually are is evident by what we do.  Yet the blinders remain firmly clamped down over eyes and ears, but not our throats. Instead, we scream for “more” — Take care of us, we say, you OWE this to us!

Hardly. This is a false mantra that has helped our decline. Nobody is owed anything, period.  Not even life itself.  Not a retirement, not a living wage, not healthcare, not benefits, not a “take-care-of-me-for-all-my-needs-and-my-children” declaration of rights.  This is an absolute lie.

These things came into existence because the people held their taskmasters responsible for them. They did so by holding themselves responsible first. Workers were treated like slaves, denied any benefits, until the people took their plantation owners to task. These actions implicitly imply that they took on this responsibility themselves, having had enough of the abuse, sickness, injury and death associated with being a slave.  Eventually, better conditions, wages and opportunities were achieved — for a while, until the plantation owners raided the retirement funds, the pensions, cut the benefits, wages and hours, exported the jobs and manufacturing overseas, and once again, regulated the slaves to begging for crumbs all over again.

Except this time, the hard-working ethic, and self-responsibility attitudes are gone. We’re satisfied with begging instead. We march in the street holding our banners, still stupidly thinking “it matters” and change nothing. We protest, lock ourselves to doors, bulldozers or en mass in groups, “demanding” we be heard, and still change nothing.  Why?  Because we believe that we should beg from these bastards instead of shutting them down. This attitude is embedded deep within our psyche. Just give us what we want and we’ll go back to being your plantation slaves, we’ll work in your factories, we’ll build your bombs, we’ll flip your burgers, we’ll eat your endless reams of poisonous crap, or we’ll just leave you alone to go make more war — if you just give us a “living wage” and the promise of a shot at the “good life”.

They’re laughing their asses off at us.  It’s all BULLSHIT and always was.

This sort of thinking leaves the slave owners in charge, in control and still pulling all the strings on our lives, our future, our culture, our dependencies and our very existence (who lives, who dies).  Why can’t people see this obvious truth?

This is why we lack everything that it will take. We prefer to remain entirely dependent.  And as long and as forever we choose this particular path, we will remain their chattel, to be abused, used, consumed and ground up in their stupid, senseless and arrogant ways. Robots in their factories, automatons in their cubicles, endlessly laboring away to make them more and more money, accepting our fraction so we can buy more junk.  Why does anyone in their right mind think that any of this is ever going to change?

We’re getting exactly what we want because of what we do.

It’s crumbs we’re accepting, and as a result, the entire nation — the culture, fabric, attitudes, beliefs, views, opinions and most importantly, the actions of the people that support all this, are directly reflected in these crumbs.  We’re not looking forward or “up” or anything, we’re “surviving”, allegedly as we “best know how”.

This is only partly true — we may be clinging on and surviving, paycheck to paycheck, or welfare check to welfare check, but this is most definitely NOT the best we know how.  We know there is a better way, but we have to choose to live it, practice it and put it into existence.

If we don’t finally wake up to this fact, then we’re going to raise yet another generation of children who will be even worse off then we are.

There is a “Last Place” on every graph, chart, scale or measurement.  Do we REALLY  want to go there?