Climate change denial is an indefensible, morally reprehensible “argument” (it is not an argument, it is a delusional fabrication of a false reality).  Yet climate change it is still one of the most hotly contested topics in America. But not elsewhere, only here. Elsewhere, climate change is widely accepted as being very real.

Factually speaking, there is no reason for this “debate” on climate to even exist. On one side is the staggering body of evidence and scientific research, actual facts, provable, demonstrable and observable, on the other is deceit, deception and misrepresentation.  And a whole lot of money from the energy industry (another “expert” unmasked here). And an inept, irresponsible media presentation, supposedly offering “balance”. There is no balance when facts are simply not reported or routinely denied, there is only distortion and an absence of accountability.

After struggling myself with this topic, I landed squarely on the facts after a lot of research: human-caused climate change is going to destroy our world. Not harm it, not impact it, not cause only disruptions and adjustments, but truly destroy our world. It still remains the greatest threat to humankind that we have ever faced. 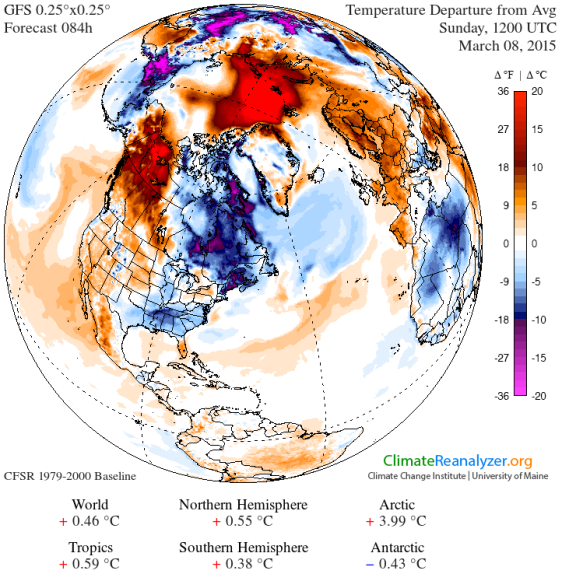 A habitable climate means a temperature range where we can grow sufficient levels of food from year to year. Even with food storage, refrigeration and freezing technology, we will still and always require a biologically acceptable temperature range every single growing season. The world cannot even afford one “missed season” of crops without causing a cascading domino of effects worldwide.

Long before the ocean levels rise and swallow up the coastal cities and regions, the normal seasonal pattern of food crops will be long gone. The melting ice of the Arctic, Greenland, Himalayas, Andes and the Antarctic will give rise to ocean levels worldwide and dramatically increased rates of freshwater evaporation causing calamitous precipitation events (floods and snow / ice storms) in some regions and extreme drought in others.

Nothing will be “normal”. Some uninformed people still believe that humans can easily survive a few degrees Celsius rise in temperatures – they’re dead wrong. We can only survive an increase in temperatures as long as our food supplies will survive and last. If we cannot grow sufficient food from season to season in a hotter / drier / wetter world, then we will not survive even if we kept the air-conditioning running. The bottom line of climate change is food and how we will manage to grow it.

It does not and will not happen all at once. It will happen bit by bit, year by year, as inexorable as the rising seas. Nothing will stop this. Nothing will make any of this “go away” or return to normal.

I include hyperlinks in my articles in the hope that they will be read. What they contain is supporting facts, science and data on climate change. Is it real? Of course. The evidence is now quite conclusive and incontrovertible, but denial is still very much a part of the American landscape.

There are many who still hope we can still do something about our habitable future, including me. We HAVE to try, no matter what, no matter the cost. Otherwise, we should just accept it and pretend we’re going to “die with dignity” as some have suggested. But this is yet another delusion. There is nothing dignified in not trying. The whole of human history, since the dawn of our species has been characterized as “trying” despite insurmountable odds. It’s the reason why we are still here. We kept trying.

But even trying is being denied by the denial industry. Denial does not want us to try, or to do anything at all except go back to business as usual. Denial wants us to go on supporting Big Energy and even more planet-destroying activities that are demonstrably ruining our only home. Denial still stands in the way despite all the known facts about our changing climate and what this will mean for us. Despite all the known evidence. Despite the scientific consensus of tens of thousands of world class experts. This is why climate change denial is simply indefensible, it is a morally reprehensible argument that fates the world to defeat (extinction) by complete morons and idiots.

The world should no longer tolerate this position from anyone on the planet. It is not an “opinion” any more, it is a dangerous, ill-begotten delusion with significant and irreversible long-term effects upon the whole of humanity, including virtually ALL possible future generations of mankind. Moreover, it is a crime of staggering proportions to sacrifice the whole of the living biosphere to a indefensible and provably false “belief” with such huge consequences at stake.

A analogy of this denial and its significant harm would be the Islamic State of Islam (ISIS). ISIS is a radical, indefensible belief based upon ill-conceived concepts and ancient mythology. Put into practice as we are seeing today, ISIS is extremely dangerous and harmful to all, even its own adherents. The United State cannot and should not tolerate ISIS, anywhere, period. No country should. It is dangerous, delusional, radical and extreme, causing severe harm and death. It’s not benign. Or benevolent.

However, the harm caused by ISIS is tiny compared to an entire world that is being impacted by the ongoing climate change denial, primarily rooted in the United States in a contingent of anti-science, anti-facts groups. Denial has become another religion among these adherents, rooted in misunderstanding, misrepresentation and ancient beliefs that humans cannot harm the planet. It’s a misguided effort to continue the concepts of Manifest Destiny and man’s preeminence over the planet at any cost, even if it means our extinction.

ISIS assaults its victims daily, while climate change only gradually reveals its true terrifying nature, expressing itself more every season. But in the end, climate change is actually far worse then ISIS, there is in fact, no meaningful comparison between the two, except as a current example of human folly and willfully embraced stupidity, and how a wrong belief system can cause so much harm and devastation. Some humans could (and have) survived under ISIS, but it is a living hell and nothing any reasonable person would accept. Humans cannot survive at all however, without a habitable climate. Extinction of our species, and the death of every living thing is what dangerous climate change really means. In terms of suffering and death, there is simply nothing that can compare to extinction.

The body of evidence that reveals that we have now entered into dangerous climate change is growing larger and larger on a daily basis. This is the real threat to humanity, but it continues to be denied by a vocalized, irresponsible and ignorant minority trying to radicalize its adherents with rabid anti-science and anti-facts dogma versus research and a growing body of knowledge of what the real climate reality actually is.

Like ISIS, they wish to force their beliefs upon the rest of the world while denying reality and fabricating the illusion that no harm is being done by their beliefs. If they had their way, they would take-over and shut down the whole climate change debate completely. Nothing would be done for mitigation, adaption or planning for future climate disruptions. And now the evidence suggests that it’s actually too late.

Many of us know and understand that ISIS is a true enemy of mankind and humanity with its ignorant superstitions and beliefs, but how many of us now understand that climate change denial is ultimately even worse?