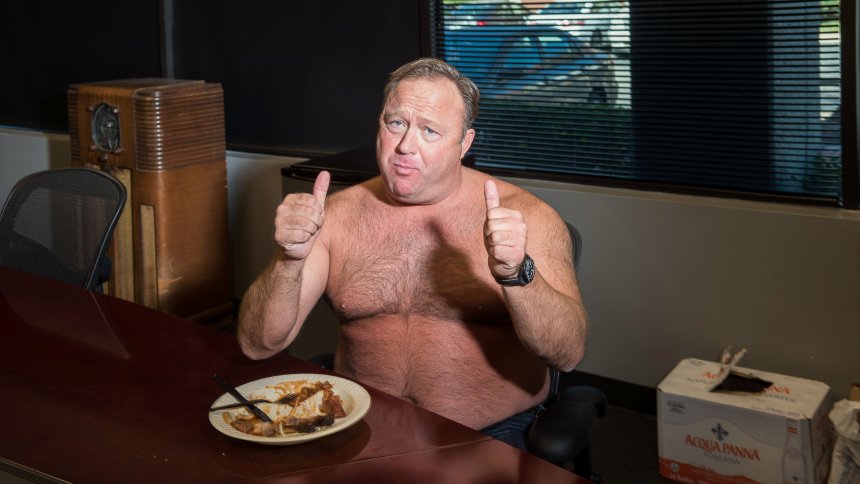 Well, I’ve been telling readers for years that Alex Jones was a total fraud, only interested in his own self-promotion and selling fake connedspiracy stories. By now, most people should be well aware of this. This ass-clown has made the snooze again, this time, pretending that a “form of psychosis” is the reason why he’s been peddling fake connedspiracies:

Alex Jones is being sued for his false Sandy Hook hoax claims. He blames ‘psychosis.’

Actually, it’s kinda fun to watch this disgusting worm wiggle when he’s on the ‘hook’ (he’s got multiple lawsuits against him now). Watch the whole video at the link – you’ll see what I mean.

Not a single credible mind in the entire country world, is going to believe this shit he’s now babbling, but yeah, that’s his ‘defense’ for defrauding millions of brain-dead ‘fans’ with incessant connedspiracies, not just the Sandy Hook massacre. And he’s lying about not being sued before “Hillary lost” – his own ex-wife took him to court, and god knows who else.

Not going to say anything more about this babbling creep – I did my research on him years ago and have steadfastly stated: he’s a total fraud. I’m rooting for him to go behind bars where he belongs. There are lots of valid reasons for this, notwithstanding that his connedspiracy claims have netted him millions of dollars , which he knowingly peddled for profit. He has, nearly single-handedly poisoned the minds of thousands of people who are STILL falling for his incessant bullshit.

I’ve been busy, working on another project, that’s taken me away from posting here. But I’ve been able to keep abreast of most of the important news. Yeah, it’s still bad and as always, it’s going to get worse.

One thought on “The Worm Wiggles”