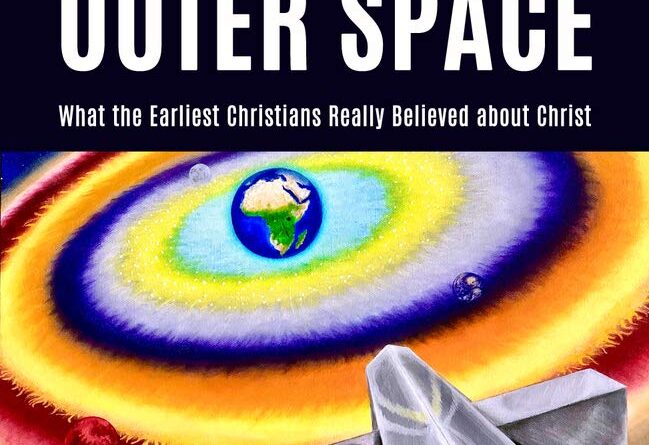 I finally received my Amazon copy of Richard Carrier’s latest research, “Jesus From Outer Space“. So far, I’ve read about 120 pages and find this one of his better works.

For those that do not know, the scholarly research by historians delving into Christianity has advanced quite a lot. Carrier is considered one of the world’s foremost experts, but his conclusions remain controversial.

The evidence for Christ however, isn’t controversial. There simply is none. Nada. Nothing. Doesn’t exist. What some researchers and many uninformed people claim as “evidence” actually isn’t real evidence at all. It does not pass muster and cannot be used (read the book) as actual evidence. The vast majority of it is ascribed to circular reasoning and using conclusions to determine proofs (which is utterly backwards). This post won’t be a treatise to educate the unread.

This book builds upon his earlier research and discovery and that of many other expert scholars in ancient history. I have always found this interesting because of my background in the ministry many years ago. I’ve long known that that Christ story (every bit of it) was a fabrication. But I did not have the research materials available to me to prove this conclusion, whereas others now have.

My approach to Christianity was always intuitive (at the time), that something was desperately wrong to the entire narrative because it is full of holes, contradictions, errors and never held together coherently. I was “taught” to ignore all of this, and even to stop asking questions. Questions lead to doubt, and doubt leads to a loss of faith. But faith in a fiction isn’t real faith at all. It’s faith in a myth, and it does not have any meaning, effect or importance. Faith must be placed on only what is actually true to be real faith at all. We are, after all, admonished to know the truth and to seek it out, otherwise we’re definitely going to be misled, which we are also cautioned to avoid.

I stuck with it for a long time and eventually came across the scholarly research that had examined the historical record in minute detail. This is what I was looking for, the actual evidence. Since then, I’ve applied the same standards for evidence to other important issues in life, most recently the bogus claims that the 2020 Election was stolen or somehow fraudulent. The same standards of evidence that must exist for Christianity to be true must also be applied to any other conspiracy (or what I prefer and coined “connedspiracy” because it really is a massive con-job). And none of that evidence actually stands up to actual scrutiny. Hearsay is NOT evidence for example, something that both Christianity and the 2020 Election had in common.

But those that do not know what “evidence” actually is, and what it means, and how with or without it, and how this changes the actual narrative, determining what is true, and what is not, what is speculation and conjecture and what is fact, will be lost without these guideposts to govern actually knowing truth and most importantly, being able to prove truth. Which means anything can claim to be “true” when there is simply no evidence at all to support the claim, or when the evidence claimed is misconstrued or as it has been shown, entirely lacking.

This is not the same thing as faith either. It is more similar to fabrication and fantasy, which nobody would argue is the same as faith at all. You can imagine whatever you want, but that does not make any of it true without actual evidence. Putting your faith on a myth just means your delusional and deceiving your own self (and anyone who would listen to you).

Moreover, the interpretation of evidence, and how this is performed is also quite important so that you do not falsify assumptions and meanings. This is an area that is very often taken and found throughout people’s arguments and claims and very often within the media. Assumptions and conjecture, and irrelevant false comparisons are used to try and bolster weak arguments. It’s a sure sign something is desperately wrong and inaccurate.

For me (and for anyone sincere), Christianity and all things that surround it had to be accurate. It had to be true in other words, otherwise it was a false belief system despite having admirable qualities and guidance for life and living. Doing good for others for example isn’t worth debating, it’s common sense, it helps people and helps the community. Being honest, ethical, moral and keeping your word is the same. There’s no need to even explain “why” these principles and practices are worth following (if you need that type of instruction, stop reading this blog).

The scholarly research about the story of Christianity doesn’t engage any of these sorts of things as there is no need. Humans have worked out how to live long ago (long before Christianity came into being). But the scholarly research does expose the story itself for what it is, and what it is not, and it is most certainly without any doubt at all, not what Christians think it is. It’s the biggest con ever told.

Many years ago, I went to the trouble of tracking down the people I had in my immediate ministry (those that I had converted) and shared with them what I had been finding. Several were downright hostile and a few were polite about it. I learned a valuable lesson – you cannot hope to bring someone to your understanding unless they are willing to put in the work themselves. Most people prefer to stay right where they are at, simply because it is easier. That’s why the status-quo is so hard to break, people stick to what they know, never recognizing the grooves they’ve cut for themselves and the high walls they’ve built around their own lives. To them, they’re both comforting and invisible, but to someone else who sees them entirely differently, they’re just prison bars.

I stopped trying to share this knowledge and information and since then, have had very few people ever bother themselves to learn more. Most people are intellectually lazy, or so it seems to me, refusing to challenge their own belief systems or even understand why things are the way that they are. I’m grateful to the people who don’t live like this, who have pushed both boundaries and understanding further and further, giving the world the knowledge that we have available to us today. But it is clear, even on a simple examination, that most of the world isn’t engaging in research and advancing knowledge, even though we all ultimately benefit from it is some way or another. We would all be living in a very different world without this research and what it has meant for humanity.

My own research (and articles) on climate change and what it means for humanity bear mentioning here. We would all be much poorer off if we did not have advanced research materials and the knowledge being gained to understand what climate change means for humanity and the survival of the species. While there are still ignorant people who will stupidly insist that climate change is a hoax, they have no evidence at all to support their claims. Just like the stolen election claims, they fabricate their stories, make up endless conjecture and phony claims to attempt to support their position, which really just shows how intellectually lazy they are.

Their con is to create a conspiracy about both of these subjects, muddying the waters as much as they can into a empty froth of fabrications and foolish conjecture. This is what they pass off as their “proof” and it’s all bullshit, and the reason why credible investigators (scientists, courts, researchers, etc.) reject their empty-headed claims.

There is a LOT that can be learned when you discover that facts do matter; evidence matters; and finally, truth matters most of all. You can then move ahead with that knowledge, versus stagnating in denial, stupidly spouting disproven claims and fabricated stories. The media dwells in their realm quite a lot, catering to stupidity, the Trump years for example bombarded the entire world with endless garbage about the phony claims and falsehoods made by Trump, Americans literally lost 5 years of their lives being blasted with his lies. Trump never did have any of his facts correct and the media helped him along with spreading his falsehoods. Trump conned millions of Americans by spreading endless propaganda and lies and millions of them still haven’t caught on.

It is relatively easy to con people as history has repeatedly shown. It can even be said that many people have no interest at all in knowing the truth of a matter. They’re quite comfortable with their confirmation bias and when challenged, will reject information and facts out of hand. In the many years that I have written on this blog and interacted with thousands of people, I’ve learned that you cannot actually help those that refuse to help themselves. Many (if not most) people prefer to stay within their own ignorance, it’s just easier for them. They develop an ill-conceived hatred for those that would extract them with knowledge from their confirmation bias. This is one of the reasons why I’ve been winding these blog posts down (again). There is little interest in truth.

The sickness within the world today is the rejection of truth. We’ve devised countless stories and endless ways to deceive people into doing what we want. The story of Trump and the story of climate change and the story of Christianity all share this in common. Ignore the evidence and do what we tell you to do. The world is much worse off now with these phony narratives. Nobody really cares and the few that do, can’t do anything about it. But we’re all suffering because of it, and will continue to do so. The lies being told have done far more harm then help. The propaganda, the manipulation and the deceit have damaged billions of people, which strangely and inexplicably, the majority of humans are ok with. It is, after all, the only world we actually know.

But for some of us, which I think is very few, it’s not good enough. Our desire is to know the truth of the matter, to understand the world and all that is in it as it really is. This doesn’t make anyone better then anyone else, it just means there is less deception going on, and you see the world quite differently then what other people see. Many of the filters are gone and the confirmation bias doesn’t govern belief anymore. You’re no longer looking for false validation to support intellectual laziness. The knowledge of the truth becomes the journey and the destination.