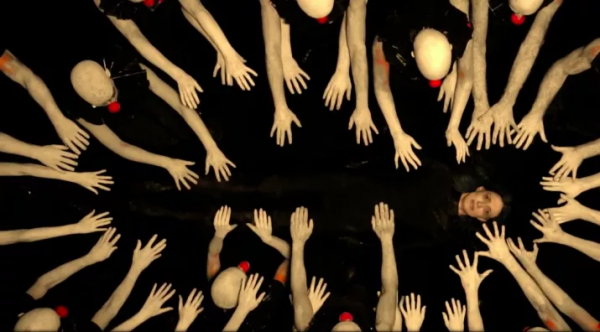 If you haven’t yet realized that the Republic is dead and is still going through the death throes of a gut-shot pig, bleating and screaming in dying agony, you have not been paying attention at all.

This process has been underway for years, so I’m not reporting anything “new” here. But false optimism and earnest hopes have a way of deflecting reality; as does the fantasy and imaginations of those who are trying to force-feed the American public into accepting a fascist future.

The latter is VERY likely to happen as the country lurches forward into a dystopian nightmare of epic proportions. The desperation for attention, relevance, power and control has reached a screeching crescendo of deafening white noise threatening to destroy us all. Almost none of it matters, the plot as it were, if there ever really was one, has been completely lost. What remains is just desperation and demands, mass confusion and white-hot hatred being whipped into a frenzy of violence and conflict.

There is no way we are going to survive this. Certainly not when there are so many critical issues that are not being adequately addressed. They never will be addressed as we are distracted by political theater, pretense and posturing, blustering and empty bravado. These are not brave Americans we are witnesses to, but spectacle and absurdity. Common sense is entirely absent, instead we’re being served left-over cold greasy mutton presented as hot prime rib of the Republic. This is the best they have to offer? You have got to be kidding me. I wish, but it’s true.

I am appalled at all of it, from deadly shootings, political posturing and rabid insanity being fomented from coast to coast. Nobody wants to accept their responsibility and culpability for their part in all of this. Nobody has any credibility or integrity. Nobody is what they pretend to be. Attacking each other has become common-place, so much so that we barely even notice the pools of blood at our feet. The players are all lying, cheating, stealing, pretending and posturing as they jockey and jostle for supremacy and temporary relevance and attention. It’s a fucking disaster of epic proportions, an American Horror Story. Stay tuned for the next episode, it is certain to be even worse and more gory.

The institutions that proposed to “serve” us have abandoned their principles and have become nothing more then massive propaganda outlets, presenting carefully scripted “stories” to incite, anger and spread additional hatred and violence. Subjects of extreme importance and relevance are shoved off the news cycle as quickly as possible as the next outrage and blood-drenched photos are plastered across the screen in yet another spectacle of horror.

America has become the epitome of a bad horror show with bad writers, bad actors and a truly terrible director, a dying Republic that can only resort to spectacle and theater. We’re forced to watch this unfolding disaster because we lack any other choice – but we certainly do not have to participate and become a party to the pretenders and liars, the cheats and grifters, the murderous fascists and the monsters in our midst, of which there are MANY.

Now, more then ever, Americans are being polarized by a complicit media “documenting” this daily shit show to take up arms and “sides” against the internal “enemies” that have become the latest whipping posts of targeted assassinations – both political and real. If your ideology does not match up to the American Taliban in red hats and Christian crosses, then you are “on the list” of hated enemies, soon to be eliminated and exterminated, literally, figuratively and politically.

It’s no stretch of the imagination (at all) to realize that things are going to go very badly for America now. This isn’t time for phony optimism and empty hopium. The very real and very serious issues facing the country are almost unsolvable now. “Almost” because I certainly do not know what can be done, anything and everything tried to-date has failed.

The populace is incensed, enraged, distracted, depleted and discouraged to the point of being non-governable now. You can’t fix what’s broken when there isn’t any tools in the toolbox. You can’t fix what doesn’t want to be fixed either. We’re not repairing cars here, what we need to do is repair people, but a vast majority refuse the mental help that they need. They’ve fixated on connedspiracy and conflation, wrongly pointing to imagined fears, fabricated “facts” and the refusal to self-educate to reality.

There is no discussion anymore, no discourse, no communication, no interactions that defuse the growing tensions and propensity towards violence, mayhem and death. Either it’s “their way” or the grave – take your pick. They’re that angry and almost always at the wrong people for the wrong reasons, but they don’t see it that way. Americans may live in a country titled the United States of America, but this is most certainly a joke now, we’re not even remotely “united”.

Divided we are, with suicidal tendencies that promise to bring much more suffering and agony to the entire population. Reason has long since been abandoned as the new prophets of the 21st century openly advocate violence and death with armed millions falling under their false gospel. The lies they tell are staggeringly stupid, rabid and quite silly to reasoned people of which there are  fewer and fewer who still remain unconvinced of this phony gospel. Their message of indoctrination to entire swaths of the population has left Americans angry, bewildered and raging with misplaced hatred.

Increasing ineptitude by political leaders and institutions of major influence including the media has totally failed to address these divisions, indeed making them worse and worse with more propaganda and rampant dishonesty. Truth, whatever the hell that is anymore, is absent, replaced by revenue, looks, likes and whatever “story” can capture a nano-second of interest.

Social media, that supposed bastion of free speech has become the megaphone of morons and idiots, proving that it’s not only the institutions that have betrayed us – we did this to ourselves too.

I’m unable to put adequately into words the disgust and loathing that has overtaken my opinion of what is unfolding. I lack the required skills to evince the full meaning of what I’m feeling now, having been eclipsed by my abilities and what is actually happening here. Reality has overtaken ability. Reason has been consumed by madness. It’s easier, safer and saner to just state the facts or at times, to just say nothing at all.

I’m exhausted by everything unfolding and how so many get it so wrong so often. They don’t understand anything and are only making it worse by engaging in the stupid selfish rhetoric that is helping this suicidal trajectory to all come true. What they imagine the outcome to be is most absolutely a fantasy, it won’t be anything like that at all. It will be worse then it is even today, far, far worse. But yet, they don’t care, no one bit. They’re only interested in their own fantasies, that scripted movie they’ve written playing between empty ears where they are the heroes and all the “enemies” they’ve imagined are dead, oppressed and locked away.

Well, it’s safe to say it’s not going to turn out like that. This is real life, not Hollywood. We’ve already seen what happens to real life wanna-be heroes, they don’t fare too well and nothing they imagined turns out like they hoped. Why these authoritarians just don’t leave the rest of us alone is a mystery. How the rest of us live is simply none of their business, and making it their business is just stupid and actually a violation of what this country is supposed to be about. It’s even enshrined in the US Constitution, not that any of these ass-hats have actually read it, let alone understand it.

I suspect that they pine for prominence, attention and importance. They don’t like being irrelevant, but here is some news to those who seek to dominate others – you ARE irrelevant and you always will be, no matter what you do, say or think. You don’t get to control or own the rest of us. Mind your own damned business and leave us alone.

This is the problem the world has at every level, in every institution, political party, government, industry and business. People trying to control people versus letting people just be themselves. If you are not doing any harm to anyone else – let them be. Don’t try to interfere. Don’t try to govern them to your demands and dictates. It’s not your life – it’s theirs. Live your own life and mind your own damned business. We all have the same rights to choose the life we want to live individually. But obviously, some claim to have more rights then others.

Humanity has a huge people problem, but digging deeper, we have a huge authoritarian problem. Some of us just can’t stand the idea of letting things be. The rest of us simply don’t give two-shits about it and mind our own damned business as we should. We’re not the ones causing problems – they are. We just want to be left alone, and we want the serious issues that affect us all to be addressed. But instead, we get whipped up and propagandized into divisions and hatred and anger and violence by these authoritarians that want to control and manipulate everyone else. All they do is fuck things up and make a mess of things. It’s been like that for thousands of years, proof that the species itself is fatally flawed.

The American Republic won’t stand under these assaults and is already faltering in precipitous ways. I think it’s going to collapse and explode, but I certainly do not want this to happen. Life is hard enough already, it will be immeasurably worse if the country implodes.