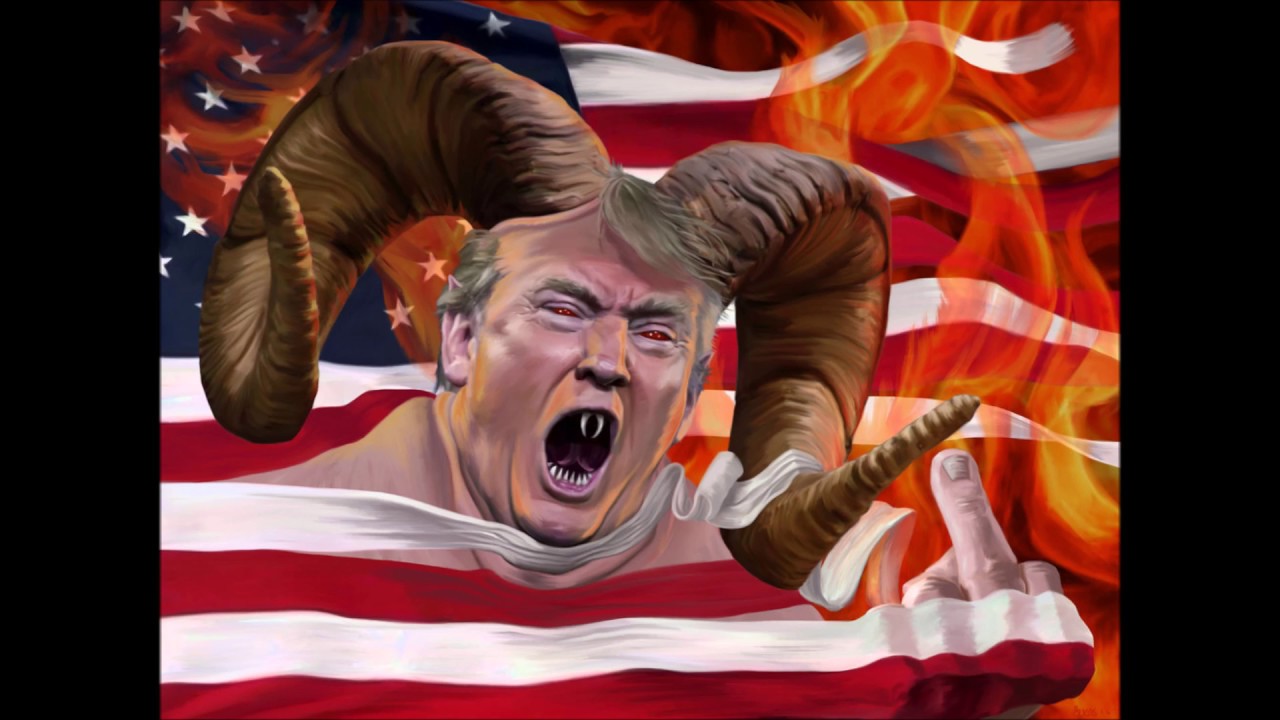 These dangers must matter equally to *every American*.

1/ Trump has moved “the Overton Window”—a theory in political science and other fields that corresponds to “the universe of things we accept as mainstream”—in a way that causes us to think Trump is *always just as bad* as he has ever been. That he can’t get *categorically* worse.

2/ The truth is that—even a year ago—if you knew what Trump is doing now, you *wouldn’t* have said “Trump is being his usual historically odorous self.” You would’ve been *imminently* terrified for your own safety, the safety of your family and friends, and the future of America.

3/ What we must do, and what I do in this thread, is talk about what’s happening from the perspective of a year ago—acknowledging that a year ago we *knew* Trump was the most corrupt, morally bankrupt person we’ve ever had in office, and actively colludes with America’s enemies.

4/ FASCISM. Since last year, Trump’s DOJ has prohibited all criminal investigations of Trump or anyone even distantly associated with his reelection campaign. Trump’s ODNI (the aggregating body for U.S. intelligence) has ceased to subject itself to active Congressional oversight.

5/ FASCISM 2. The executive branch of our government no longer submits itself to Congressional subpoenas. Whistleblowers—or even those simply *perceived* as not 110% “loyal” to Trump—are hunted down within the executive branch and summarily fired for their alleged thought-crimes.

6/ FASCISM 3. Trump openly says he won’t accept the results of his reelection campaign unless he wins. And he has said this while having his DHS and DOJ build a corrupt, anonymous, restriction-free multi-agency army that is deployed around the country to enact political violence.

7/ FASCISM 4. Trump now fundraises daily off the fascistic idea that he is building an “army” and, moreover, that his political opponents are traitors to the United States. Of multiple Democratic leaders, he says not just that they are traitors, but that they should be executed.

8/ FASCISM 5. Trump has fired any and every executive-branch Inspector General whose independent investigations threatened to reveal his wrongdoing. There is no evidence that the executive branch has the capacity any longer to police itself beyond Trump’s variable whim and will.

10/ FASCISM 7. Trump has orchestrated a complete takeover of the United States Postal Service in order to make effective administration of a national election during a pandemic all but impossible. He’s openly railed against free and fair elections as America once understood them.

11/ TERRORISTIC VIOLENCE 1. Trump has a long history of openly promoting violence—both using violent rhetoric and threats himself and encouraging those of his supporters who do the same. But in the last year his penchant has become something else entirely—and we must register it.

13/ TERRORISTIC VIOLENCE 3. Trump has promised to position armed law enforcement officers at polling places around America—with the places to be chosen using political calculations—in a violation of over a century of US tradition and in a way that will terrorize non-Trump voters.

14/ TERRORISTIC VIOLENCE 4. Donald Trump uses his social media accounts to actively incite his supporters to armed conflict with peaceful left-wing protesters. This new behavior has already contributed to gun battles in America’s streets and a number of fatalities in recent days.

16/ TERRORISTIC VIOLENCE 6. Trump has just recently begun using his social media accounts to either directly or indirectly amplify messaging suggesting that white nationalists and far-right militiaman who do violence are martyrs to a cause: in this case, the cause of Trumpism.

17/ TERRORISTIC VIOLENCE 7. Not all terroristic threats reference violence. Trump’s “jokes”—those closest to him confirm that he *doesn’t joke* without purpose—about refusing to leave office or recognize term limits or acknowledge separation of powers *are* intended to terrorize.

18/ COORDINATED PSYOPS 1. Trump campaign messaging and micro-targeting once again—for a second straight election—dovetail with messaging from hostile foreign powers in a way that’s uncanny. But coupled with all we now know about his past collusion, it must be seen as intentional.

19/ COORDINATED PSYOPS 2. Trump now regularly uses his social media feeds and his direct agents to distribute to American voters multimedia that has been doctored. Never before in American history has a candidate repeatedly pushed fraudulent artifacts on unsuspecting U.S. voters.

20/ COORDINATED PSYOPS 3. Trump now so routinely spreads disinformation that (a) he knows is disinformation, and (b) is dangerous to the lives of ordinary Americans that after years of resistance to doing so, social media companies have had to sanction and supervise his accounts.

21/ COORDINATED PSYOPS 4. Trump has always accepted—and distributed—Kremlin talking points and intel over US policy and intel if the former benefits him (as it often does, because Putin wants him to win). Trump now uses the US intelligence apparatus to spread this disinformation.

23/ COORDINATED PSYOPS 6. There’s always coordination between a president and top officials in his party over messaging. But when a president is *known* to be spreading foreign disinformation, and his party *continues* such coordination, it becomes a *systemic attack* on America.

25/ POSSIBLE WAR 1. I have no idea why everyone forgets that we were minutes away from being *lied* into a possible World War 3 in the Middle East just 7 months ago. I know much has happened since then, but we can’t forget that this happened—because the danger *is still present*.

26/ POSSIBLE WAR 2. When Proof of Corruption is published in a week, it’ll be the first book to comprehensively analyze Trump’s collusion with Turkey and collusion with Israel, UAE, and Saudi Arabia to reveal how close these courses of collusion are to causing the next World War.

27/ POSSIBLE WAR 3. Trump killed Qasem Soleimani as he was in the midst of peace negotiations aimed at reducing tensions between the Saudis and Iranians. Trump and his agents lied about the intel they had on Soleimani, the threat he posed, and how and when they chose to kill him.

28/ POSSIBLE WAR 4. Iran is a bad actor in much of the world; that’s clear. But in the Soleimani crisis, Iran chose repeatedly to de-escalate, while the Trump administration repeatedly chose to *escalate*. And we now know it was getting pushed by countries Trump does business in.

29/ POSSIBLE WAR 5. Trump’s Middle East allies—allies because they make him money or help him get elected, not because they aren’t criminals hostile to US interests—have been clear about wanting war with Iran. Other Trump pals—like Turkey’s Erdogan—are just as dangerous to peace.

30/ POSSIBLE WAR 6. Beyond almost causing WWIII in January, Trump did the same last fall in permitting his friend Erdogan to invade Syria and ordering all US troops to withdraw from the country. It led to an attempted genocide against our Kurdish allies *and* the rebirth of ISIS.

32/ GENOCIDE 1. If I’d told you a year ago that Trump would concoct a systematic government plan to kill 1% of the U.S. population for the *sole purpose* of ensuring his re-election, you would have called it genocide. That’s exactly what has happened—but the Overton Window moved.

33/ GENOCIDE 2. In April, we learned from major media that—even after being told *2.5 million Americans* (at least) would die in a “herd immunity” pandemic response—Trump demanded that COVID-19 be allowed to “wash over” the nation to protect the economy (aiding his re-election).

34/ GENOCIDE 3. A study published in the Washington Post reveals that 90% of US COVID-19 deaths are attributable to Trump’s delay in shutting down travel from Europe in March—a delay we now know was caused by Trump orders involving Mike Pence, Alex Azar, and (again) the economy.

35/ GENOCIDE 4. Trump, angered at an Azar subordinate’s comment on the effect of the pandemic on the economy—an *correct* comment—forced Azar to turn over pandemic response to Pence, which caused a 14-day delay… and 90% of the now-185,000 U.S. COVID-19 deaths, per the Post.

36/ GENOCIDE 5. In fact, undercount data compiled by the NYT confirms that the current 5-month death toll from the coronavirus isn’t 185,000—it’s closer to a quarter of a million. As the number rises, the percent attributed to Trump’s “March delay” will rise up to 95% and beyond.

37/ GENOCIDE 6. So Trump is engaged in a genocide-for-reelection quid pro quo on two fronts: pandemic response delays to preserve his campaign rhetoric on the economy that have caused 90% of all current deaths, *and* a “herd immunity” plan his government is now covertly pursuing.

38/ GENOCIDE 7. Trump’s lies on hydroxychloroquine and other drugs, mask-wearing, social distancing, school closures, business closures, vaccine timelines, the origin of the virus, the timeline of the virus, and so much else have caused more domestic deaths than any POTUS *ever*.

39/ Do *not* allow Trump to keep moving the Overton window. Do *not* pretend “everybody already knows how bad he is, so there’s nothing to say about it”—as it *falsely* portrays Trump’s insidiousness as static and unchanging and unsurprising. No: 2020 Trump isn’t even 2019 Trump.

40/ Thousands of respected figures formerly in the U.S. military, intel community, DOJ, or Congress; major historians, Trump biographers, and well-known legal analysts; even members of Trump’s *own family*—are telling America it is in *grave and imminent danger*.