Greg Palast has released a free download video about Venezuela and Hugo Chavaz and what is behind the machinations to (re)gain control over Venezuelan oil, an amount which truly dwarfs Saudia Arabia.

The Assassination of Hugo Chavez

There is a lot of online speculation regarding the assassination of Chavez. Here are a few, which notably includes the other cancer-struck victims of South American leaders:

Did the CIA Poison Hugo Chavez? by Dean Henderson 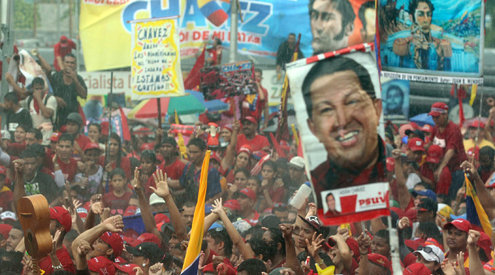 I’ve seen quite a bit more over the last couple of years.  Netflix has a number of documentaries on South America and the Bolivian Revolutionary movement.

If you are truly interested in obtaining “another education” about what is really happening in South America, then take the time and watch them.  Read the investigative reports and stories. Unwind your brain from the vile and incessant propaganda that has become American “journalism” by the deceptive media.

Believe absolutely nothing that the main stream media spews forth. If you haven’t killed your television yet, you most definitely should. T.V. is the primary brainwashing tool of the ignorant masses.

The Venezuelan “story”, as far as American politics is concerned is all about oil, always was, always will be.  The democratic people’s movement widely supported by the Venezuelan people (but not most Americans) is actually a side-show, contrasted against corporate America and their incessant demand to regain access to Venezuelan oil.

Many American have demonstrated themselves as “haters of freedom”, openly embracing the brutally murderous policies of their government and efforts to topple “regimes” around the world by any means necessary.

I have always found this level of ignorance and hatred for truth hard to stomach, because it reveals what really governs and supports this country. The duplicity, secrecy and criminal actions supported are all deemed “necessary and good” despite their horrific consequences of thousands upon thousands of innocent victims being extinguished, or left to live horribly disfigured and suffering, all of it swept up under the sordid rug of publicity and brainwashing that passes for news in this country.

Here is a example that just appeared today: From El Salvador to Iraq: Washington’s man behind brutal police squads

This is leading to civil war in this country – and soon. There are so many inconsistent belief systems now vying for total control of the people that armed conflict is sure to arise. There is a reason they’ve admitted to wanting to use armed drones in America, and buying over a billion rounds of ammunition for “Homeland Security”. There’s more, much more. Thousands of armored personnel carriers, tanks, thousands of rifles, equipment, paramilitary training of American police forces, constant surveillance of all phone calls, emails, websites visited, forums posting — it’s all leading to the same place.

Most Americans are deeply misled about how to properly prepare for this, getting their “advice” from so-called idiotic experts and forum posts that are nothing but poorly disguised advertisements to buy stupid shit.  I’ve read many and think that Americans are being as badly deceived there as they are from the main stream media.  There are only two writers / forums I can suggest, finding the rest (that I’ve checked out) naive, ignorant and dangerously stupid: Surviving in Argentina and Real Life Survival School.

There is a HUGE reason I do not advertise on the other “prepper sites” and alternative news sites.  I simply have no interest in supporting their fantasies and misconceptions about “preparations” or how to survive the coming collapse or the wrong-headed views on how they’re going to “restore” America (that is not going to happen).

Millions of Americans have now rushed out to buy as many guns as they can (the wrong response for what lies ahead) or stockpile gold and silver (another useless idea).  Most wrongly believe they’re going toe-to-toe against military troops (a gigantic misconception) or hide off in the woods (do it and die). Their “preparations” are guns, bullets, bunkers and beans in other words. They’re making little to no preparations about how to live within a drastically changed society – the “plan” it seems, is to disappear somewhere and fight the enemy.

Most of us live very, very far away from the enemy in reality, so it’s really hard to see how that idea is going to pan out.  It probably won’t. Instead, after lugging up tons of useless shit to their bunkers and retreats and eating up all of their beans, they’re going to discover that they’re isolated, hungry and alone except for their fellow “survivalists”, unable to engage with anyone or do anything but sit there and starve.

This is a dumb idea. It was always a dumb idea. You can survive in your “retreat” only as long as your food lasts and you can be resupplied.  Those two links above that I’ve shared emphasize that food is your most important weapon. You can endure many things, but without food you’re not enduring anything.

It does no good at all to point any of this out. Nothing anybody can say or do will prevent the coming war in America, or the ongoing crimes against humanity by the American government all over the world, or dissuade the endless stupidity that so many seem to embrace.  It all leads to the same place in other words, inevitable conflict on a massive scale and unbelievable levels of suffering and death.

Americans are NOT ready for what is to be unleashed. They’re far too naive, ignorant and continue to embrace strong delusions and believe absolute lies.  Nothing anybody writes is going to change this.

Some time back, I had wrote several articles that suffering was the only thing that would awaken America.  I still believe this to be true. I think the devastation here will be very, very bad.

One thought on “The Assassination of Hugo Chavez”