I got a chance to watch “The Age of Stupid” on Hulu over the weekend. If you haven’t seen this, maybe you should. It’s a fictional, but not really – account of how we screwed up the planet and wiped ourselves out.  I say not really because there is a preponderance of evidence now that this is exactly what will happen.

I also watched “Living On A Dollar A Day”.  Four students head to Guatemala to experience first-hand what it’s like for over a billion people on the planet to try and survive on a dollar a day. These poor boys (self-imposed poverty, but I use the term to describe their naivety) envisioned difficult times — but had no idea just how difficult this was going to be.  Within mere days, weakened by hunger, they lacked the necessary strength and cognitive ability to make the right decisions.

They tried to be farmers and if not for some expert help, they would have failed miserably, not understanding anything. But they learned, which was the whole point to the documentary.  Even so, they could not and did not ever learn to raise enough food to actually feed themselves — not even for a single week. Instead, they had to buy all their food in order to survive. It’s a telling lesson – in an incredibly fertile country.

Both videos demonstrated that food was the #1 issue for everyone. Adequate nutrition was nearly impossible to find.  Notably, this is true right now and will be quadruply true in the future.

The Age of Stupid aptly describes our incredible insane behavior as a species.  Suicidal tendencies notwithstanding, humans are actively planning for their own extinction. 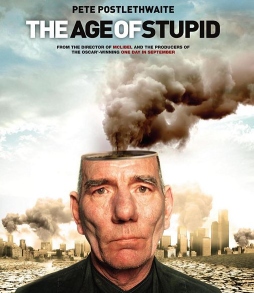 I’ve updated “This Means Extinction” a bit, since there has been more news of relevance to report.  If you haven’t seen the video depicting the unbelievable ice loss in the Arctic, it’s only 30 seconds of your time.

This should make you pause:

In 1975, CO₂ levels were 331 ppm.  This contributed to the increase in surface and air temperatures we experience today.  Ocean temperatures and Arctic temperatures are both now substantially higher.

CO₂ levels are now 399 ppm and still rising. We have not yet experienced the effects of our current emission rates, we’re still experiencing the 1970’s and perhaps early 1980’s. Therefore, what lies ahead will be substantially worse then what has already occurred.

The oceans have absorbed nearly all the heat increase, but are not expected to absorb much more. The likelihood of massive global heating taking place in a very short time frame is very real now.

The significance of this means catastrophe for all life on Earth. Our very survival is no longer certain.

Much has been written about keeping the global warming below 2°C, but this is already much too late. This figure is entirely fabricated, just like the “450 ppm” limit I read about only today.

I’m quite puzzled by the constant misrepresentation that climate change gets. The longer we avoid the whole truth, the worse it is going to be.

It appears that a type of “crisis control” is being employed to avoid a global panic among the population. I find it hard to fathom how this will actually help and not make things worse because it delays an effective response.

There are now large parts of the world that are already substantially higher then 2°C.  A case in point:

It should be very clear that the world political body lacks virtually everything it’s going to take to “stop climate change”. The mainstream media will continue to distort, misrepresent and under-report what has come to be the “worst news for humanity” until it is too late.

What can you do?  First, read the facts, reports, analysis and science for yourself. It’s not that hard, many others have already done this and reported their findings. Then, look around and find out what (if anything) is being done about it (in time).  If you’re like me, you will conclude that “very little to nothing” effective is being done, which represents the worst possible choice humans can be making right now. You’ll find plenty of lip-service and not much else, certainly nothing on the scale that is even remotely required to offer even a measure of relief.

The conclusion I continue to have is that nothing will get done in time. Catastrophic warming is an absolute certainty now, along with massive hurricanes, storms, tornadoes, flooding and drought. This means stupendous crop losses year after year as the climate swings wildly from the norm.  The “new normal” means “disaster after disaster”, which is exactly what the world has been experiencing everywhere.  Flooding, drought, brush fires, forest fires, pine beetle infestations, crop losses, “superstorms” and unusual weather patterns start to take a devastating toll upon our economy and ability to feed ourselves.

It should be clear that our leaders lack the ability to make meaningful decisions when it comes to saving ourselves.  Pray that no external threat ever appears  — because it’s clear they cannot help us.  They still remain a house divided, beholden to Big Oil and corporate profits vs. making the right choices and protecting humanity from itself. They’re political hacks and whores, selling out because it’s really all they know how to do.  We should all by now come to expect nothing more.

I’ve said for a long, long time, “you’re on your own“. The recent bailout of the bankers vs. the people should have made that perfectly clear.  Climate change is the worst threat of all presently facing humanity.  We can survive almost everything else.  Fabricated terrorists threats are a ploy to keep millions of people distracted. You cannot trust these people – not one iota. They have a proven history of deception and deceit. You are free to decide for yourselves why they would do that (just follow the money).

Sorting through all the garbage that is put forth on the nightly news and the Internet is increasingly difficult. It is very time consuming. Common sense however, will tell you that not everything is what it seems. There is much to distract, deflect and defer any honest inquiry with red herrings, false flags, straw arguments, fabricated evidence and endless hordes of keyboard kommandos.  Websites governed by Morons-R-Us is not the place to get the best advice.  They’re proven to be consistently wrong, year after year, always focusing on distractions and side-issues, most if not all that never come true.  Side-stepping all these distractions is rather important so that you can stay focused on what matters and what WILL affect you and your family.

It’s really hard to project anything more than a few months ahead anymore. Even a few years is far too difficult, but it is absolutely necessary in this case.  My own efforts at building a greenhouse, growing food, and (still) learning from my multiple mistakes reveals that feeding myself, let alone my family, is not going to be easy or even moderately hard. It’s going to be INCREDIBLY DIFFICULT and it’s going to take years of preparation and hard work. This is NOT something anybody is going to be able to go off and do “when the time comes”. Those that try this will die in mere weeks, or attempt feed off the corpses of their fellow idiots. They will lack the practical know-how and school of experience that it will require in order for this to even minimally work.

Very few people are engaging in a serious effort to help themselves. Those that have will admit to how hard it’s going to be based on what they’ve already learned and tried to do (real experience vs. Hollywood “knowledge”). The rest remain utterly deluded that they can rely upon modern production or graze on dead tree bark after wiping out the remaining wildlife.

The world is headed for a disaster of biblical proportions, ie., “die-off” on a massive scale. Nothing in our entire history has prepared us for what lies ahead. We’re too many now, far, far too many to assume that we’re going to slide through this somehow unscathed.  I do not believe that anything will stop this now, the die has been cast due to decades of denials and delays and wholesale ignorance. The only available and meaningful response now is to prepare as best you can. It is clear — nobody else will be doing this for you. This is something you will have to do for yourself.

The Age of Stupid really does describe modern humanity today. Our actions as a species and even as individuals, is really quite stupid. We are self-destructing, poisoning our planet, our home – our atmosphere, our soil, our water and acting like nothing is wrong. We’re being repeatedly warned by very qualified experts that we are headed for disaster and still we ignore the evidence.  We laugh in derision at those among us that are quietly working towards self-sufficiency or living lightly, secretly afraid that they might actually be right, but that would mean we’d have to give up our present lifestyles. Instead, we gravitate toward “greenwashing” and all things that give the appearance that it’s “good for the planet” instead of giving up what really matters.

This is the Age of Stupid – to ignore the warnings, the evidence, the science, the facts, and to go on deceiving ourselves again and again and again as we watch the needles climb higher and higher, hoping against hope that somehow it doesn’t really mean what it says it means, that the outcome will be different then what the facts tell us.

Cognitive dissonance does not explain all this away. Stupid is stupid.  Gump was right.  Stupid is as stupid does.  Actions and beliefs have consequences, including inaction and wrong beliefs. Failure to take the time now to save yourself is simply stupid beyond belief and there is no excuse.

ANNOUNCEMENT: Governments must put two and two together, and pull out all stops to save the Arctic sea ice or we will starve.

10 thoughts on “The Age of Stupid”