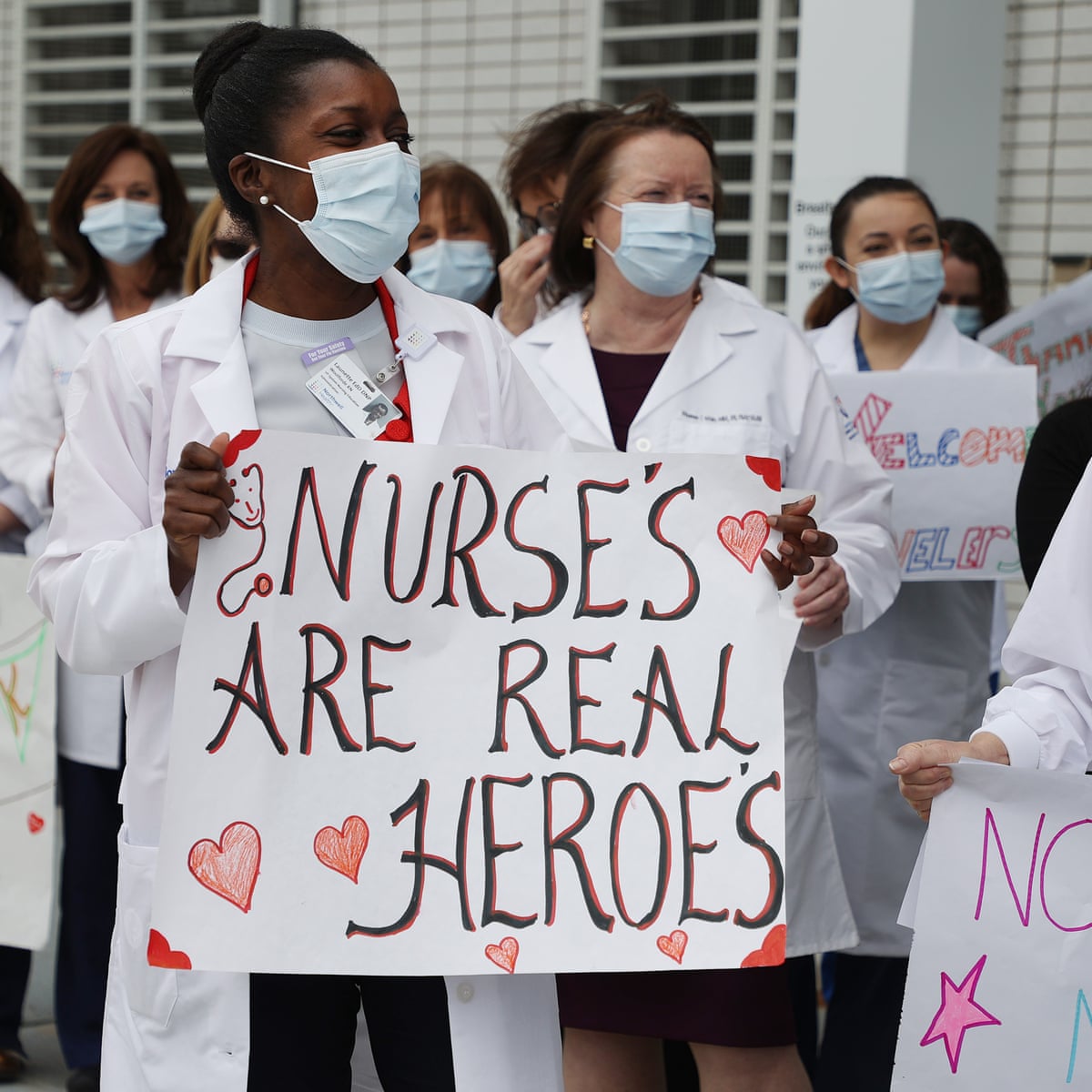 Reprint from The Week – https://theweek.com/articles/952443/americans-are-choosing-death-over-deprivation

Americans are choosing death over deprivation

This past week, millions of Americans joined together in total defiance of all public health advice for another round of infecting and killing their loved ones, while ensuring that the nation’s medical professionals will face several more months of risky, grueling, emotionally draining labor trying to keep a country full of heedless jerks and credulous conspiracy-mongers alive.

Many doctors, nurses, and hospital staff are increasingly hopeless and disillusioned. Gone are the 7’oclock cheers and “Thank you essential workers” signs in every window. That fleeting solidarity has been replaced by a cold, selfish indifference to the staggering and seemingly pointless sacrifices these heroic workers continue to make on our behalf. And many of them are wondering how much longer they can keep it up.

Never has this been more clear than it was over the long Thanksgiving weekend. While many Americans did the sensible — if heart-wrenching — thing and stayed home or limited their gatherings to small, pre-existing “pods,” more than a million people traveled through airports the day before Thanksgiving. In one poll, 40 percent of respondents told researchers they were planning on attending a large, in-person gathering. All of this while a record 90,000 people were already hospitalized with COVID-19, and public health professionals begged people to stay home so as not to exacerbate the problem.

How can people do this, knowing that their actions risk their own lives and the lives of others? It would be one thing if the incredible, worldwide scientific effort to create a vaccine for this terrible virus was failing and there was no hope on the bleak horizon. But it looks like multiple vaccines will be deployed beginning next month, with the possibility of a return to some kind of normalcy by May. The end of this thing is now tantalizingly in sight.

This is not to minimize what people have been through, or the misery that awaits those who hunker down for the winter, still cruelly shorn of nearly all social contact and ordinary joys. It is not to dismiss the agony of those who have lost jobs and businesses, with no help whatsoever from their government since the summer. It’s all been a nightmare, and I’m one of those extraordinarily fortunate professionals who has been able to stay employed and work from home with my family.

But the reality is that many Americans are now consciously choosing to spread death and suffering over finding the strength to endure for a few more months. And they aren’t just harming themselves: They are putting unimaginable strain on the country’s health-care system, as burned out doctors, nurses, and staff ask themselves why they are martyring themselves on behalf of such a venal society.

Don’t believe me? If you have friends or loved ones who work in health care, ask them how they’re doing. I reached out to some of the medical professionals in my network, and the responses were sobering. “Many of my colleagues (the including me),” said one pediatrician friend, “have had their faith in humanity irreparably damaged by our countrymen’s response to this challenge.” One viral immunologist told me that, “I feel upset with these folks because this is inevitably going to cause more death and harm and not just to them but others who did stay home and followed guidelines.” He added that much of the blame rests with national and state political leaders determined to play down the gravity of the problem so they could rush economic re-openings. A palliative medical counselor said that the staff at her facility “is wonderful but furious when it is the patients’ reckless behavior that puts them in the ICU for COVID.” Fury gives way to exhaustion and resignation. “They still provide superhuman care,” she says, “but it’s only human to be frustrated.”

Don’t know anyone who works in the field? Hop online and behold the scores of health-care professionals shouting into the abyss about the horrors being visited upon them. There’s the nurse who, knowing what is in store for her in the coming months, decided to isolate herself from her toddler for the duration. “This is what I have to give up,” she writes plaintively, “so these horribly selfish people can go to their grandmas house and infect her with Covid. Then they’ll bring her to my hospital.”

There’s the doctor who writes that, “I am humbled and terrified by what I see in the COVID ICU…What is coming in many states across the country is akin to the Titanic.”

There’s the South Dakota nurse whose thread about COVID patients showing up in the ICU still believing it’s all a hoax went viral. “These people really think this isn’t going to happen to them,” she says. “And then they stop yelling at you when they get intubated.”

Health-care workers are not in the army. No one is forcing them to suit up and plunge themselves into another 16-hour shift of watching a deadly virus suffocate people to death. There is no law that says they must carry on even when COVID patients show up convinced the whole thing was a plot designed to harm President Trump’s re-election prospects. Health-care providers know perfectly well that a lot of the patients they are treating scoffed at the danger and shrugged off expert guidelines and did whatever they wanted anyway.

This kind of behavior is evil, selfish, and cartoonishly destructive. It fills me with incoherent rage. This is a country full of people who have completely lost their way. One of the most infuriating things about it all is that the gob-smackingly selfish actions of your friends and neighbors will serve to counteract the sacrifices of those who have spent the past 9 months trying to do the right thing.

It means your friends, parents, and grandparents could get infected with this disease and then die from it, all because millions of your oafish fellow citizens plainly lacked the fortitude to weather temporary adversity, and because the depraved ghouls currently in charge of the federal government refused to spend the money needed to help the riskiest places — bars, restaurants, and gyms — stay closed and financially whole. You can blame President Trump, his inane culture wars, and his callous message of “don’t let it dominate your life” all you want, but those are words that should not have resonated at all with sensible citizens capable of divining the difference between truth and fiction, of thinking for themselves instead of disappearing down a rabbit hole of lunacy every time they open a Facebook post.

We know now where this is headed over the next few months. Hospitals will be taxed beyond capacity, spiking the death rate from COVID and delaying or canceling care for tens of thousands of others. There will be mobile morgues and mass graves and countless Zoom funerals and an entire generation of health-care workers with permanent emotional trauma. People will show up to the ER after car accidents and heart attacks and allergic reactions and die waiting. The overall coronavirus death toll, now at more than 266,000, will surpass 400,000 or more by March and could ultimately reach half a million or more. The economic fallout could last years.

So much of this suffering will ultimately have been needless. Tens of thousands will perish weeks or even days before they could have been saved. More and more frontline workers will succumb. And it is all because so many of our fellow citizens have revealed themselves to be both pathetic and decadent. It is truly hard to believe that the millions of people who are too weak-willed to go a year without sitting down for a meal inside a restaurant are the descendants of the brave men and women who fought and won World War II with five years of painful sacrifices and solidarity.

A lot of Americans circa 2020 wouldn’t have made it three weeks past Pearl Harbor before protesting rationing and demanding our surrender to the Axis powers, and they deserve neither our sympathy nor the extraordinary heroism of doctors, nurses, and staff in hospitals and care homes across the country.

What this article has to say, says it quite well. Selfish, ignorant, arrogant and indifferent Americans by the MILLIONS acting like crybabies and spoiled brats, refusing to do their essential part on inhibiting the spread of the coronavirus.

Right here in my own home town (which is VERY small), I see these same selfish fools proclaiming that they’re not going to wear a mask or stay home no matter what. And cases and deaths are still rising here.

These people should all be denied medical treatment (for anything) since they are actively denying life and health to everyone else. Fuck ’em all. This is yet another group I have nothing but pure loathing for now. Ignorant, evil, selfish bastards, every last damned one of them.

My wife and I have made it this far without infection, doing our part, staying home, wearing masks when we have to go out, cleaning and encouraging others to do the same. It’s NOT that hard. Everyone can do this, but millions won’t. They don’t care about anyone else, too stupid to realize that their freedumbz isn’t being infringed in the slightest.

Stupid fucking bastards. I’ve always known that large parts of America was filled with stupid, evil people. We now have all the proof we could ever possibly need that this is fact, not fiction.