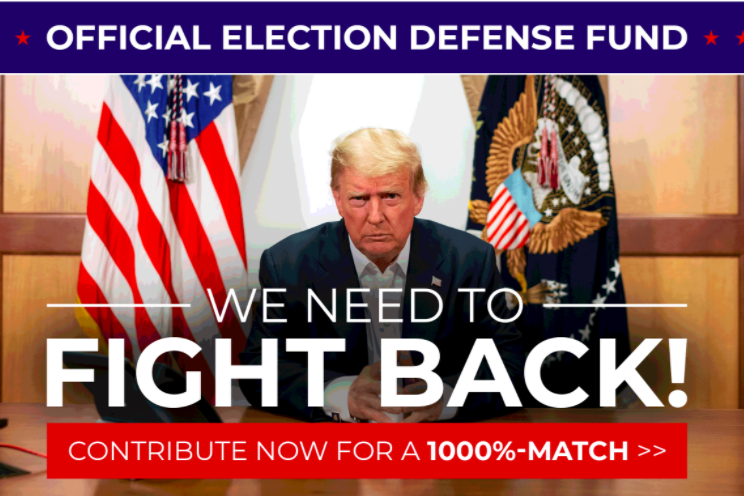 Americans are still waiting, and so are the courts, for provable evidence of election fraud. But that hasn’t stopped the hearsay and connedspiracy claims, which continue to ratchet up higher and higher.

The idiots over at the Federalist and many, many other right-wing website haven’t bothered to check the facts, or the court cases, or examine the evidence, which many others sites and sources and the courts have done so far. They start in with the allegations that there must be fraud, therefore, Trump should burn down the Federal government and poison the well for Biden.

This call to destruction is a demonstration of traitorous activity and the proof anyone should ever need that these clowns are 100% against the Constitution that governs this country. They’re not willing to wait for the evidence – you know, actual proof – before advocating destruction.

The Sidney Powell “evidence” the Federalist idiots are pointing to is 100% bullshit. She’s a lawyer, and a Q-anon follower with a sordid history of lies and deceptions herself, the “evidence” doesn’t exist other then hearsay and connedspiracy claims. Powell is a Trump loyalist and is apparently willing to say anything for face time. And some of the usual networks are stupidly allowing these claims to be widely aired. As they say – extraordinary claims require extraordinary proof and so far, it does not exist.

My sister-in-law retired from law enforcement and is a rabid Trump supporter. She’s also claiming that the election was “stolen” by spouting the same useless connedspiracies we’ve all seen. She’s apparently abandoned an entire career of having to prove the facts for the criminals she arrested. She knows from training and experience that you have to prove your case in a court of law, and if you cannot actually do that, you do not have a case.

So what is happening the courts with the claims of election fraud? THEY’RE GETTING TOSSED OUT. There is no evidence. And no, this is not some ‘nefarious Democratic plot’ unfolding in the State courts around the nation – these courts are being conducted fairly by both Republican and Democrat judges. And they’re ALL saying the same thing – no evidence and tossing the claims out.

There are still a few other court cases unfolding, but so far, this is what has happened.

What is very strange is educated people are forgetting their own education and training, and stupidly going along with these connedspiracies. It’s as if they all swallowed a bunch of stupid pills or something. I think it’s TDS – Trump Derangement Syndrome, which has always applied to his loyalist, not his detractors. When it comes to Trump, the man walks on water and performs miracles when in reality, he’s just been careening from one disaster to the next for four long years.

They can’t see it. They cannot admit to it. They refuse to accept it. It’s one of the most bizarre psychotic episodes in our entire history.

Trump is going to go down as the worst U.S. President in history. It’s pretty unlikely (but not impossible) that we will never see such a disaster like Trump again. But very strangely, his fans, followers and loyalists are acting like Trump isn’t going anywhere. Apparently none of them have actually read the Constitution either, and do not actually care what is says about elections, but come January 20 – he’s gone, where he can then launch his desperate personal defense claims against numerous criminal actions and lawsuits that have been pending. And he’s planning on starting his own media ’empire’ apparently, to milk even more money from his die-hard supporters.

I don’t care where you spend your money, but you’re going to be fleeced if you give it to Trump & Company. Perhaps you deserve this too, there is a price for being stupid and obtuse and refusing to accept reality.

Update: I wonder how many of these ‘donors’ realize this in typical Trump dishonesty:

But any small-dollar donations from Trump’s grassroots donors won’t be going to legal expenses at all, according to a Reuters review of the legal language in the solicitations.

A donor would have to give more than $8,000 before any money goes to the “recount account” established to finance election challenges, including recounts and lawsuits over alleged improprieties, the fundraising disclosures show.

Donations under $8K to Trump ‘election defense’ instead go to president, RNC

Ironically, the “Stop The Steal” is engaging in this very thing from the deluded donors.

This is a topic I have long harped on here. It’s dangerous to be willfully dumb. People will take advantage of you, and you will make numerous bad decisions in life. Holding onto a false world view and engaging in connedspiracies and fear-mongering lies isn’t “free” at all. These things affect your mind, your state of being, your intelligence, your finances and your ability to cope with the real world in life and make the correct decisions. I cannot emphasize this enough. I have personally witnessed disaster after disaster in countless lives that have jumped down these rabbit holes of connedspiracy. This is not hyperbole either, they number in the hundreds of destroyed families that I’ve personally known.

So returning to the morons over at the Federalist, they want Trump to blow it all up:

That means right now President Trump needs a skunkworks team coming up with as many political land mines as possible to embed in the landscape if Republicans are forced to retreat from the White House in January.

Yeah, that’s really ethical. Bomb the shit out of our democracy because you losers lost. Get delayed “revenge” because your man-child was rejected by intelligent Americans.

Going over their 12 point revenge-attack, they want to further their asinine connedspiracies by getting still-in-office Trump to release ‘secret documents’. Trump has had four years to do this, but as we’ve seen, nothing has been leaked.

I have been conned by conspiracy theories before, but came to realize that I was being a fool. The reason it happened is because I accepted what I had read or had been told without actually checking the facts. I adopted some of these connedspiracies and held them for years, but eventually, I want back and picked them apart, applying the standards on how to know truth. And I found out that I was simply wrong, but in some ways, it was too late for me. I had already committed damaging claims and made disastrous decisions.

So what I have learned is that reasoned examination, critical thinking and the essential requirements for factual evidence is almost always absent from these many claims. And they come from supposed “smart” and educated people who should know better. There is another lawyer I know who is a raging connedspiracy theorist. This person has made numerous stupid and dangerous decisions and life choices as a result of these beliefs. While it is their right to do so, the harm I’ve seen is huge. You don’t get any of that life back that you wasted. It’s gone – forever. And if you smarten up you will deeply come to regret this.

America needs an educational corps to deprogam the millions of idiots that now infect this country. Basic common sense, education, logical thinking and proof of evidence would go a long, long ways to undoing the astounding levels of stupidity that have poisoned America. There are also many media outlets that need to be regulated or fined for publishing damaging lies. But I don’t know how this could be done. The best approach would be to educate our population on how to discern truth. The disinformation outlets would wither (but probably not die).

This is why other critical topics like climate change, fracking, capitalism and so many other extremely important issues are simply rejected out of hand. Refusing to be fully informed has consequences for us all. A present example is all the environmental protections and rollbacks initiated by Trump which directly contradicts the claims for clean air, clean water and healthy places to live. Most Americans seem to have forgotten the horrific levels of pollution we endured back in the 50’s and 60’s when some of the protective measures were finally put into action. They have wrongly assumed that we have erred on protecting the environment, while at the same time, claiming they want clean air and clean water. You cannot have one without the other – laws and regulations made clean air and clean water possible by restricting some of the pollution.

Trump has tried to destroy this – and his base of loyalists cheered him on. Now there is a movement for the truckers to strike because they’ve fallen for the stupid lie that the election was stolen. This is the kind of consequences we have from a populace that remains dumbed-down by lies and connedspiracies and lacks the capacity for truth. They’re rejecting the truth and what hasn’t been found. They don’t even yet realize that this is evidence – what has not been found proves that these connedspiracies are lies.

There are millions of my fellow Americans that want to do the same thing – make their objections known, either through direct action like civil war (the extreme examples), or boycotts, or refusal to accept the results and the next President. I would support them if they had a case, but they don’t.

Protests are part of a democracy and at the very heart of true patriotism, but protesting on a lie is just the height of stupidity. If the courts receive and agree that there is evidence to support the claims of election fraud – let’s see it. I want a fair election just like everyone else. But my own research indicates that these claims are baseless, conflated, and many of them are outright fabricated. I’m not going to get too excited about “fraud” unless it is proven.