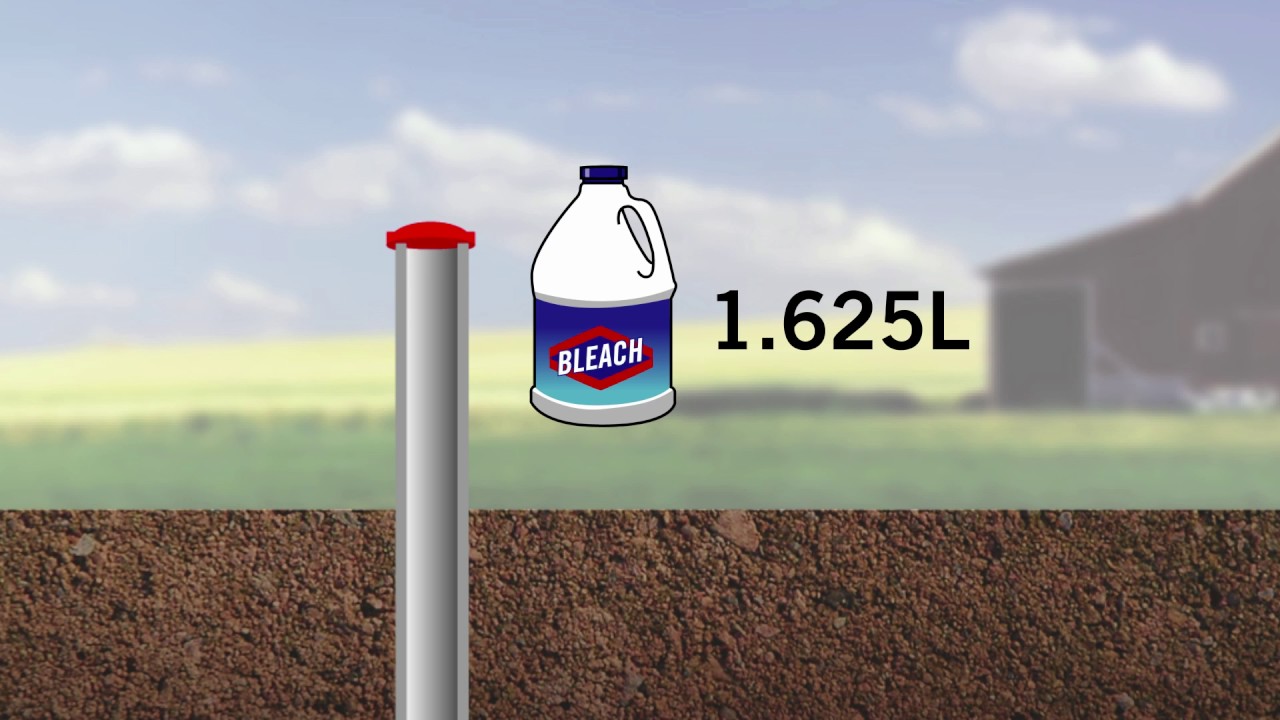 I’ve been pretty busy lately. Yesterday, I shocked my well with a bleach treatment. This is a technique that allows you to kill off any bacteria that might show up in a test result. You won’t really want to drink water that may have coliform in it or other bacteria. It’s a brand new well and I don’t think the well driller treated the well (like they should have).

You can find videos online on how to do this. Basically, you pour bleach into the well and run a water hose down and turn on the water. The well circulates the water and bleach mixture, killing off the bacteria. This is pretty simple to do and some companies charge over $500 to do it.

My well is 330′ feet deep and I know that the water is actually coming up from near the 330′ depth mark. It’s a great well with 40 gpm (gallons per minute), but it wasn’t until we drilled past 300′ did we find that level of volume. The well pump itself is suspended at 310′ or so. Doing the calculations shows that there is around 450 gallons of water in the well, which requires about 1.5 gallons of bleach.

The real way to do this is to circulate the water / bleach mixture at depth (pump depth), down in the strata where the water veins actually are. If you pour bleach into the top of the well, it will simply never reach the bottom of the well. To solve this, I attached 3 hundred-foot hoses together, along with a 4′ foot metal pipe (to weight the hoses and pull them nice and straight), and lowered this all the way down into the well, careful not to drop it. I then attached a Y-connector to the spigot and using a second short hose, I used a funnel to pour in the bleach into the short hose. If the Y-connector is open for both hoses when doing this, you can get the bleach to run from one hose to the other without much mess. Close the short hose Y-connector and turn on the well. The water will come up from the bottom of the well where the pump is, and force the bleach down to the end of hose at depth.

I did this treatment four times, at 300′ feet, 200′ feet, 100′ feet and again, when I had the hoses out of the well, using up about 1.5 gallons of unscented bleach (important). Now I wait a few days, then run the well for four hours or so and flush out all the bleach. This is supposed to kill off any bacteria.

I had done research online and didn’t find anyone that had the same idea of simply lowering hoses down into the bottom of the well like this to circulate water at depth, but it was easy enough to do. I will get the well tested after I get everything flushed out.

Today I took down about a dozen dead and near-dead trees. Due to dry summers these past few years, some of our trees have died and they needed to come down. I was able to push them over and take out the stumps, despite some being of decent size. Right now, the ground is soft with the spring melt and you can do things in the spring that are harder to do in the dry season.

Tomorrow, I’ll probably do some road grading if I can, since the road is tore up pretty badly by idiot neighbors who still haven’t learned how to drive or take care of a road. They never help fix the road, but they’re sure happy as hell to tear it up. If I don’t fix it, nobody will and it would become impassible in due time. I’ve utterly given up on these clowns years ago.

There are still many piles I have to burn off (and make many more), more trees to deal with and other big projects to get done (new heating system), but spring is FINALLY here (ya!) and the hard work starts (again). Forest living is great – but if you need sunshine, fire breaks, firewood – it’s also a lot of work. There are always many projects to tackle and take care of.

Spring planting will be different this year, I will grow less of everything. Truth is, I can’t eat everything we harvest and preferring fresh food and eating “in season”, we will plant what we can eat and harvest, storing only a little (a few root crops) this year. Right now, food storage isn’t much of a problem and I’m not putting any garden abundance aside.

I’ve noticed a HUGE increase in food prices however. I’m totally at a loss to guess whether or not prices will come down “post Covid”, but the way people are acting, there will NEVER be a post-Covid period. No shots, no masks, no social distancing, people insist on business as usual and infections, variants and deaths are still going up as a result. I still hear from people that are convinced vaccination is a government “plot”, alternative treatments “work” (they don’t), and even some idiots that claim they’re immune (nobody knows). But the behavior I’m witnessing tells me that Covid-19 will be with us for a long, long time. If everyone doesn’t vaccinate, and participate in protective measures, this virus will be with us indefinitely (while it mutates into something even more deadly, finding plenty of fuckwit hosts to inhabit). If Covid just killed the idiots off, I’d be totally fine with that, but alas, it’s killing people who are actually trying to survive.

We live in the Age of Stupid. And the land of Selfish and Indifferent. America is NOT the “land of the free and home of the brave”, it’s the land of the fee and home of the slaves. Plantation owners used to deliberately keep their slaves ignorant and uninformed, forbidding reading, books, writing, etc., to ensure that their slaves would never gain the knowledge that they needed to emancipate themselves. Eventually they did, learning to both read and write and understand the law, the US Constitution and the Bill of Rights. If you were caught teaching a slave how to read, you could be jailed, whipped and even banished.

Americans are just like that today, they don’t want to read what matters, preferring instead to let their plantation masters control their thoughts, actions, beliefs and awareness. They stupidly parrot utter garbage that they’ve absorbed online from some wackadoodle website or other source of disinformation. If you don’t yet realize that this is the media, especially social media, and most institutions that control the herds of morons in America today, you definitely need to read a lot more.

We’ve all heard of herd immunity, but nobody wants to contemplate the meaning of herd stupidity. This is happening all over the world now and it’s not accidental. People are “more stupid” then before, they’ve just given up, abdicating their lives to the control of others. I’ve no doubt whatsoever that stupidity is going to destroy the human race. Stupidity is probably what is going to kill off many of us, long before “mass deaths” start occurring.