The atrocities in Ukraine being committed by Russian troops and commanders is beyond description. I’ve been following the war that Russia stupidly refuses to call a war since its inception. Ukraine was illegally invaded by Russian forces under the pretext of a “special military operation” which Russia had no legal right to engage in against another country. Since then, Russia has continued to consistently lie, fabricate and deflect from the truth of what is happening in Ukraine.

Here is the West, we’re all shocked at this blatant genocide taking place in the 21st century. But genocide is pretty common in human history and the modern age clearly hasn’t managed to put a stop to this.

The suffering of the Ukrainian people is only being matched by their incredible fortitude and endurance. They have beaten Russia again and again in battles across the countryside but not without taking enormous casualties themselves. Russia believes that they can threaten the West with nuclear annihilation for providing Ukraine with weapons, funding and resources – but this is just more posturing and lies by Russia.

Also shockingly, some Westerners, particularly here in the United States have sided with Putin the Butcher in a bizarre twist of loyalty, wrong blaming the Ukrainians for ‘hostilities’. Frankly, only the brain dead and deeply misinformed could possibly construe such a fairy tale when all the evidence speaks otherwise. But this betrayal to the United States by some of our own citizens is quite telling – it’s a repeat of recent history here and the violations against the US Constitution embraced by the Republican Party.

The United States government has clearly claimed unending support for Ukraine – not Russia, and has not bowed down to Russian demands. This is why American support for Putin is a betrayal to the United States, these Americans are embracing an enemy of the United States. Anyone who has followed the news for the past five years will have seen countless examples of this type of betrayal.

In the US, our Constitution protects the right to speak freely. You are not arrested for verbally supporting a dictator or a genocidal leader, but in Russia anyone who speaks out against the war is arrested, fined and or imprisoned. Even the slightest protest is met with swift retribution. You can’t even use the term “war” without being arrested. The Russian people learned very quickly that speaking up against the war would be costly and many languished in jails and prisons for doing exactly that. Many more left the country, only to find that the global sanctions against Russia for their invasion also impacted their ability to make a living elsewhere. Numerous people had to return – and stay silent.

There are now countless stories (thousands and thousands) of Russian soldiers looting, raping, murdering and torturing Ukrainian citizens. Collaborators within Ukraine have been caught out giving out personal information and details on Ukrainians that refuse to support Russia’s invasion. Over 8000 war crimes have been documented so far, with countless Russian soldiers waiting to be charged, tried and prosecuted. This will only happen if Ukraine wins the war – which they just might.

She pointed out that violence against Ukrainians is a direct weapon of the enemy against the civilian population of Ukraine.

“The point is that they want to deprive women of the opportunity or desire to have children again. This is a clear genocide. The soldiers are relying on orders to destroy the whole country,” — she said.

Vladimir Putin is a war criminal and will go down in history as one of the worst, of this there is no doubt whatsoever, and he should be caught and tried and likely, hanged for his crimes. The indiscriminate and targeted bombing of hospitals, orphanages, aid stations and civilian homes is inexcusable. Over 1,000,000 Ukrainians have now been forcibly deported to Russia. 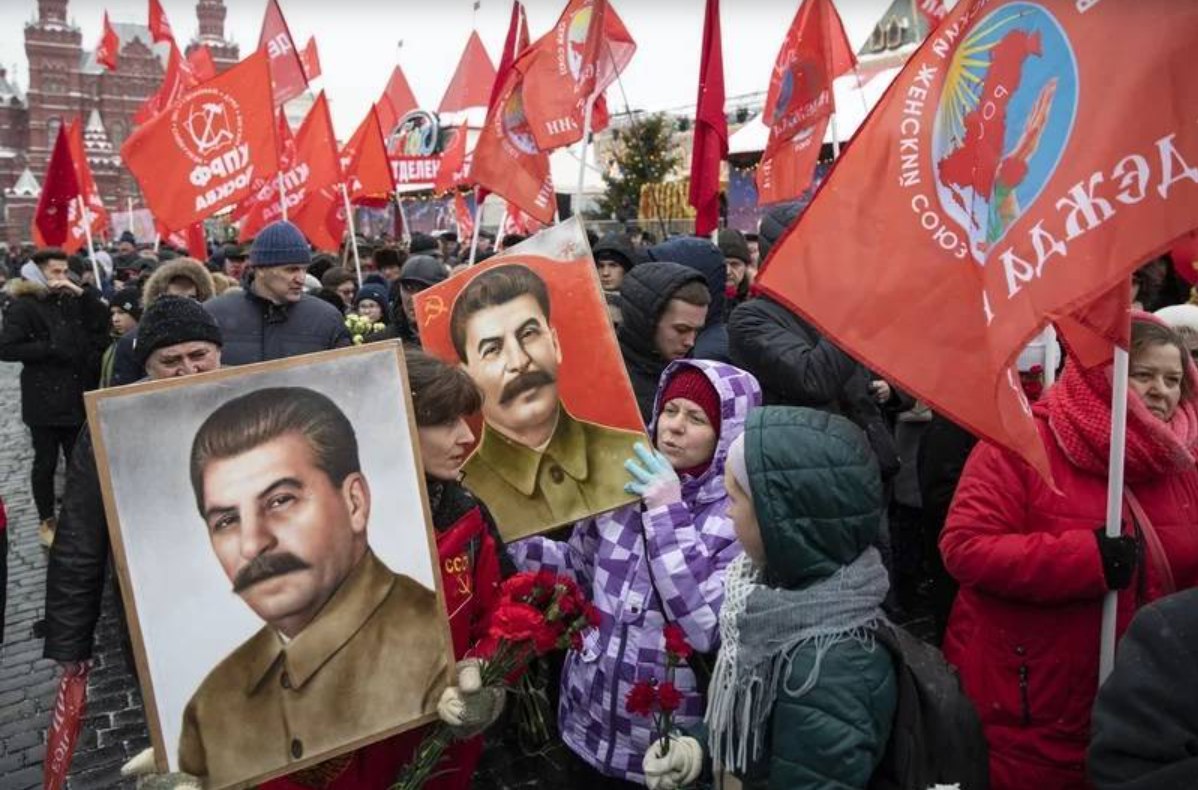 You might think this was a color photograph from 1938, but it’s not. It’s Russia 2022. Stalin is making a comeback.

So far, the Kremlin has managed to keep control on the Russian media by endlessly spewing non-stop propaganda about the war (and issuing nuclear threats to the West), even showing videos of nuclear bombs falling on Paris, London and other European cities on State television. Almost all privately controlled media and news sources in Russia were shut down and those that still exist are prohibited from reporting any truth.

In my mind, it’s all endless bullshit and bravado by Russia, because there is zero provocation for nuclear war. Should Russia deploy nuclear weapons, the retaliation against Russia will be swift and decisive. Russia will be utterly and forever destroyed.

I’m not buying the threats about nuclear war at all, not until I see decisive steps actually being taken. Putin is acting irrationally and without effective leadership and counsel from within the Kremlin, there are numerous reports that he is ill and dying. A coup within Russia remains a high probability as the Russian people see thousands of dead soldiers being returned to Russia in metal coffins and body bags.

So far, the Russian death toll exceeds 21,000 troops and commanders, with Russia lying about this figure and returning bodies in the dead of night, but this is a far smaller number then the total number of Ukrainians that have been killed. Mass graves and evidence of mass murder has been found all over the country as Russia troops attempt (and fail) to cower the population towards surrender. That is extremely unlikely to happen, as the fighters and civilian forces engaging the Russians have made perfectly clear – there will be no surrender. For them, it is a fight to the death, capitulation to a murderous regime is simply not an option.

Telegram has been one of the leading sources for the Russian war in Ukraine – and the evidence of rape, murder, looting and genocide. Russia will never be forgiven for what they’ve done to their “brethren” and neighbor and reparations and accountability is just a matter of time.

Supposedly, by May 9th, Russia promises that “everything will end” which can be taken to mean anything at all. Most likely, they’ll stop calling it a “special military operation” and admit it’s actually a war (that they started). Or they will use tactical nuclear weapons, which if utilized, changes everything.

For those following these daily crimes, nothing that Russia claims or promises can be taken at face value, they’ve never told the truth about their crimes and intentions and are likely lying again.