This is a disturbing story that could have truly huge implications. A gigantic oil tanker, abandoned in the Red Sea is in imminent danger of failure, dumping a million barrels of toxic crude oil in the Red Sea.

Not only would this destroy the coral reefs, it would destroy the livelihood of one of the most volatile regions in the world. This in turn, would probably trigger war as impacted countries would have to compete for fewer and fewer essential resources (food and water). The desalinization plants would all be severely affected.

The environmental and humanitarian disaster would be unprecedented. No spill would have affected so many in such a short time.

“Devastation to the health and livelihoods of millions of people living in half a dozen countries along the Red Sea coast would be assured. The air they breathe, the food they harvest at sea, and their water desalination are all at immediate risk.”

Immediate intervention is necessary, but being hampered by the rebel forces in the area.

“Devastation to the health and livelihoods of millions of people living in half a dozen countries along the Red Sea coast would be assured. The air they breathe, the food they harvest at sea, and their water desalination are all at immediate risk.”

It’s no stretch to then realize that war would result as starving countries fight over unpolluted food and water.

The urgency is real, the level of corrosion is extensive and in imminent danger of collapsing. 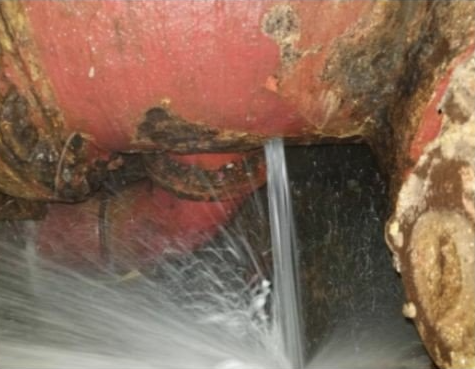 The world doesn’t have a rapid response force to jump in and deal with this (which we probably need) irrespective of the “permissions” required from local warlords.

Besides, repairs are probably not going to cut it at this point, although they could buy us precious time to offload the oil.

“Our last chance to pump off the oil in the vessel and stockpile oil booms regionally to contain an imminent spill is quickly disappearing,” the authors warn.

Environmental experts have long described the Safer as a ‘floating bomb’, and given that the oil itself has been left to rot, some diplomats think the rebels agree and are using it as a deterrent, “like having a nuclear weapon“.

Immediate intervention is needed (somehow). Despite the international backlash this would cause, I’m thinking they should just “do it” and bring in the equipment, crews and tankers to offload this oil asap and then deal with the backlash that would arise.