I’ll title this post “Projects 2013”, although several of these have been underway for a few years.  Due to the large number of blog posts here, the only way I can keep things straight is to come up with a unique blog title.

These are some of the projects I’m working on this year:

I’ve two ponds now, both man-made. Dug by machines, but it’s still a lot of work. This year I’m expanding the lower pond, which also is giving me a lot of needed dirt to be used elsewhere (hugelkultur beds and road work). 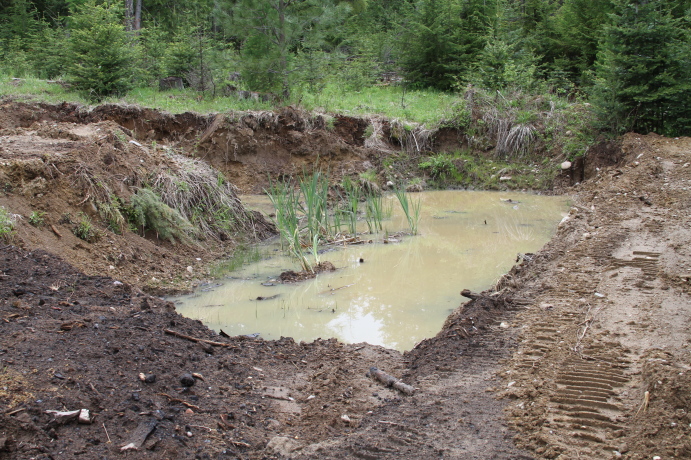 Some helpful creature deposited some cattail seeds in this a year or so back. 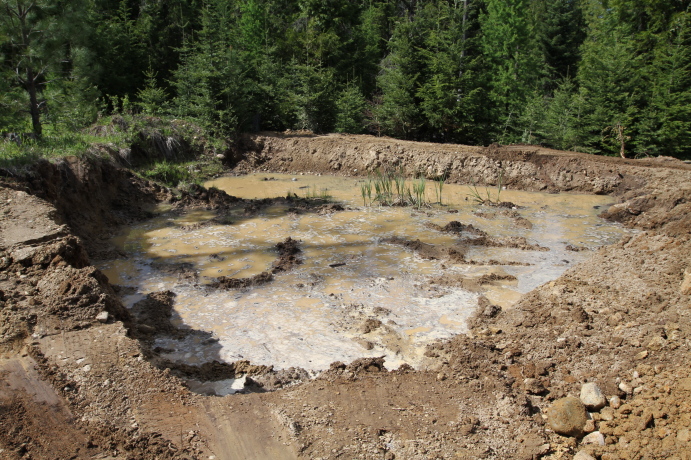 I haven’t measured this, it’s about 100′ across I’d guess.  Deeper is better then wider (less evaporation). I can make this deeper if needed in two ways, pile up more dirt around the banks, which I have plenty of, or scoop out the bottom this summer when things dry out (probably).  The pond is not sealed, so it will undoubtedly leak.

The reason for the pond is it’s a magnet for wildlife. It was actually supposed to be a burn pit, but flooded, so I decided to expand it. It’s not done, will probably work on it all summer, off and on.

Hugelkultur is a planting technique that helps change grow problems areas into productive areas. You can grow anything, trees, flowers, bushes or vegetables.  I stumbled across this concept while research my soil problems.

Bad soil can be dealt with in various ways. Hugelculture is only one way to deal with this, there are others, including sheet mulching and adding amendments.

The Permies.com hugelkultur forum is the place you can start to learn about hugelkultur.

The concept is simple: dig a trench and save the soil.  The trench can be shallow or deep, even as much as 4′ – 5′ feet deep if you have a lot of material to bury, and as long as you like. Some hugelkultur trenches are over a kilometer in length.

Lay down logs, limbs, sticks and organic materials in the trench. No rhyme or reason to how, just lay them down. Avoid cypress, peppertrees and aromatic type trees is all you need to know.  I have tons of pine trees and they’re ok to bury.

Bury the whole thing with the dirt you saved, making a mound.  The mound can be as high as 7′ feet (it will settle).

If you are making tall mounds, pile your woody materials fairly high (4′ -5′ feet above ground level).  Cover with soil and pack down.  This is fairly labor intensive, so recruit, cajole or draft the help you need with cases of beer, threats or whips, whatever works for you.

You will need to seed the new mounds to establish a root system to help hold the soil in place.  The underlying woody material will naturally fertilize your mound and provide the necessary oxygen space required for the growing root system.

Hugelkultur beds will not need to be watered after the first year in most cases (ever). They will naturally retain moisture and can also be used to help with soil erosion. There are many various applications for using hugelkulture that I like.  I have tons of slash to dispose of, but burning this isn’t what I really want to do. Carbon sequestering is another advantage of hugelkultur, burying woody materials or even bio-char works well for this.

Below is a video of some small hugelkultur beds:

Check out this forum thread for pictures of some large-scale hugelkultur beds being built.

I’m really interested in this technique for several other reason. I’ve got really crappy soil, and I’ve got tons of woody material (burn piles) that I can’t keep up with (the land cleanup here is horrendous).  While this land grows trees quite well, it does not grow anything else.

Here’s what I’m dealing with near the house – clearly hard pan with decomposed granite: 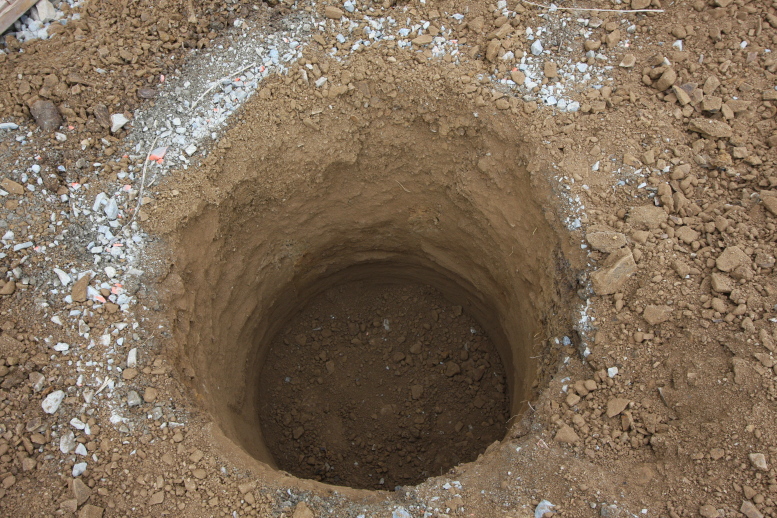 Here’s a pictures of the soil I ran into when building my french drains – nothing is going to grow on this except dust and blisters: 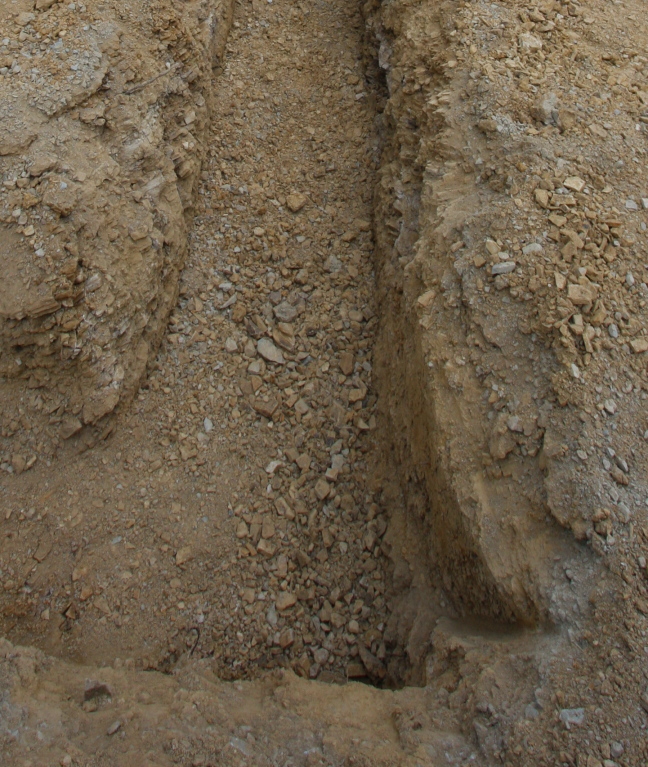 I had to add several hundred yards of soil (some years ago), but this wasn’t all that good either: 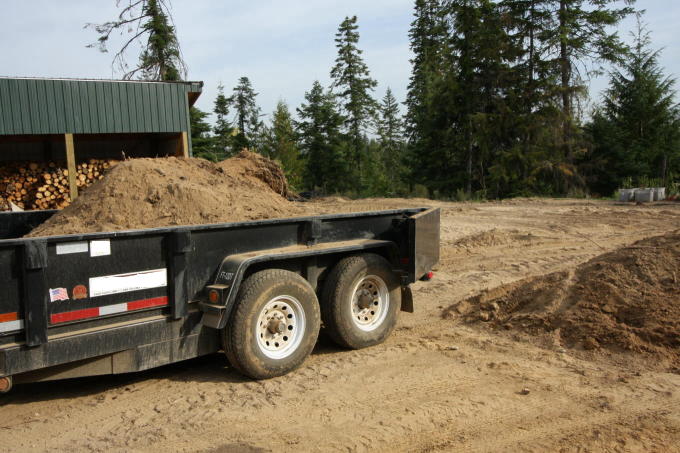 This is the same spot a few years later, and I’m still not happy with it, but I did get some things to grow (fruit trees are transplants of course): 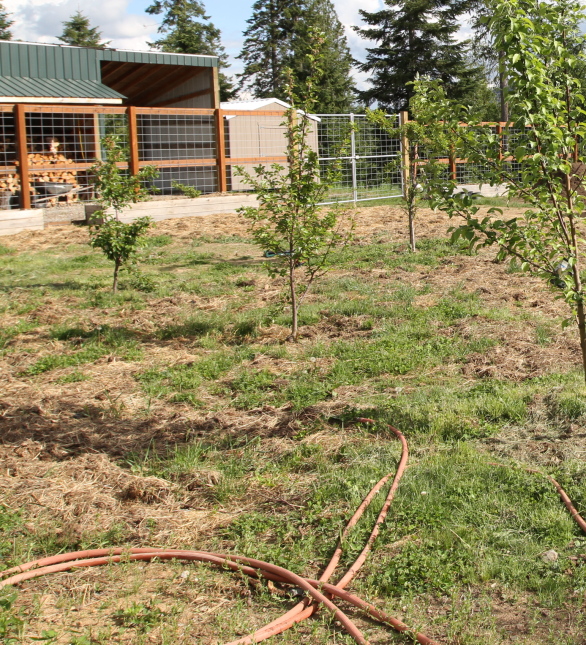 I did manage to score some good topsoil for the greenhouse, which you can see in the background, but the rest of the soil shown here is still fairly poor (nothing was planted other then the trees, it’s just wild grass growing).

I actually hate grass, it’s really a useless ornament as far as I’m concerned. Can’t eat it and it takes a ton of water in most places I’ve lived to keep alive. I made a deal with my spouse – you mow it, I’ll plant it. There is grass in the front yard, but I don’t have to take care of it. 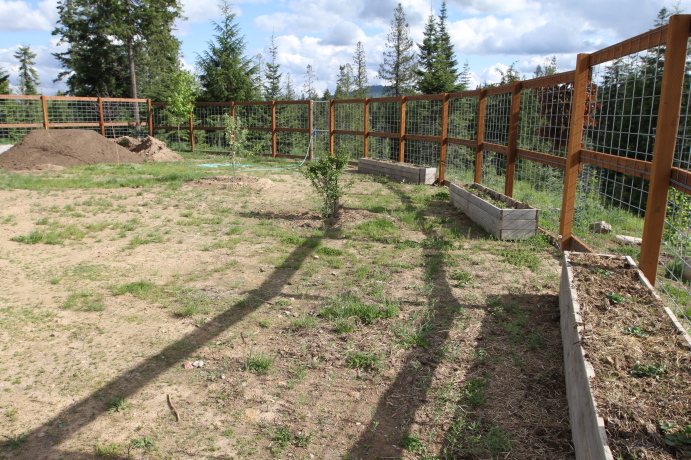 I do have 100 potted trees ready to go into the ground somewhere.  The small ones won’t be planted this year, just the larger ones (deer are a major problem here). Every tree will get it’s own steel reinforced cage with 1,000,000 volt death-ray-land-mine-shock cage. Did I say deer are a problem here? 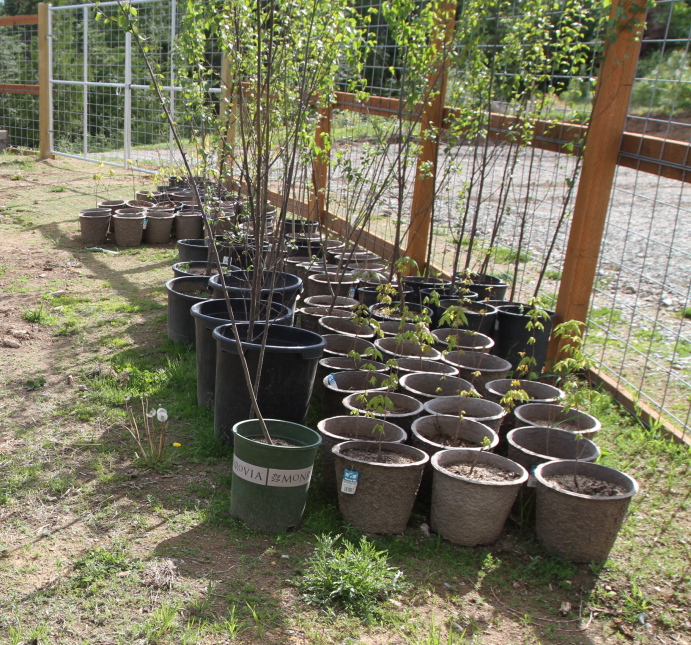 We’ve had some marginal success with mounds of dirt and planted trees (the ones the deer didn’t kill): 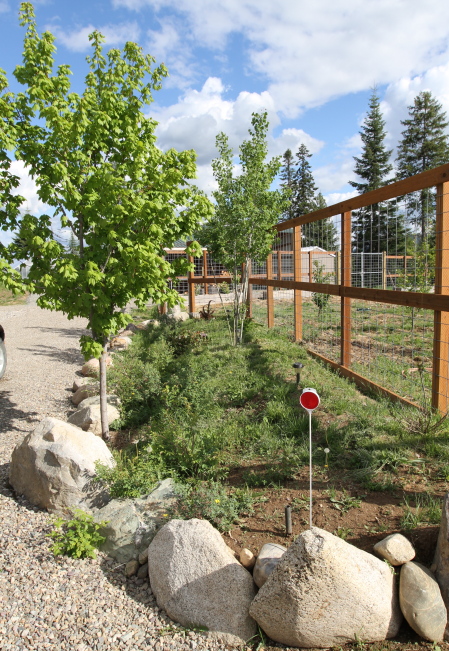 Here’s a future home of a hugelkultur bed (one of many to be done): 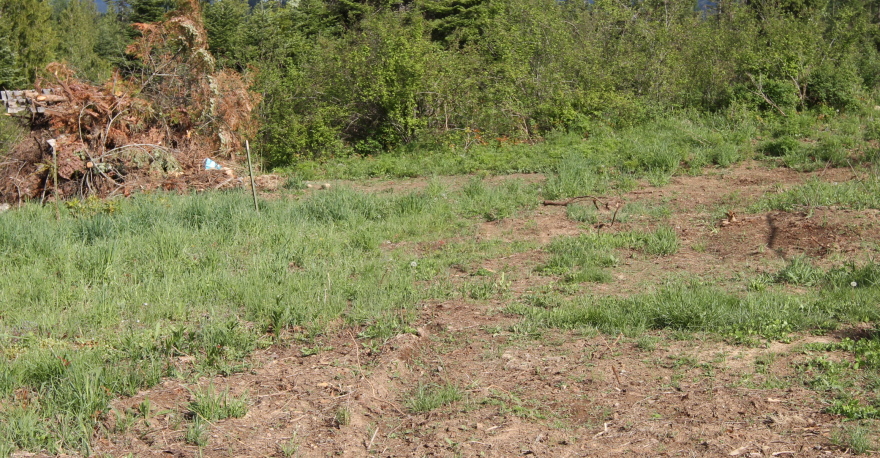 The brush pile you see will be buried. I have over 100 of these piles now, and could easily generate 1000 more.  This land was BADLY raped by the logging company that came and raped the land. Nothing would grow here that didn’t survive the machines, slash and compaction. Several thousand hours of hand-picking has now transformed the land into a regenerating forest.

I expect to build a number of hugelkultur beds (very soon) as my primary approach to rehabilitation of the land and getting things to grow. So far, about a dozen sites have been identified. Most will get planted with the potted trees you saw, and others will be in the garden area where I can keep the large four-legged rodents at bay.

I should try and find some pictures of the god-awful mess I inherited and post them here. When I saw the land, I felt that I could make a difference. I’m sure I have, but it’s been quite hard.

Most of the forest that I have seen in the West is actually much like this, badly abused. No American has ever even seen a “natural forest” except in very remote locations that have managed to remain untouched by predatory humans. Almost everything you see is third and fourth generation “regrowth”, a sad caricature of what was once growing there.

I actually have several hundred more “projects” I’ll be doing, some this year, some in the years to come, I’m usually just too busy to mention them or too tired.  Caretaking land is a lot of work, if it’s land that has been badly abused, or if you intend to “do” something with it (such as live there or raise food), then you’re going to have to work at it.  I don’t mind, getting “dirty” is just part of homesteading and it’s a lot more fun then sitting in traffic.