Which States are Best Prepared For Climate Change – where are you?

I’m kinda fascinated with what’s going to happen to the climate – thus the intensity of posts about climate on this blog. A while back I’d shared a link with a talk about David Wasdell, who claimed that we would see 8°C or more rise in global temperature. He’s been vindicated: Climate outlook may be worse than feared, global study suggests.

It’s still stunning to see the non-response, non-prepare attitude of the American populace to this unfolding disaster. Quite frankly, the majority of Americans are simply too stupid distracted to realize the accelerating danger they’re in. Or become cognizant of the complete and total “non-future” that their children are inheriting. That may be harsh and judgmental, but it may also be quite true. Something has to explain the complete lack of interest in what is the most essential thing of all – a livable habitat, without which, all of our petty differences, complaints, fears and desires are moot.

Could be that what defines a livable habitat is not widely understood. While that may be true, there should still be a sufficient level of awareness that the future habitat now being projected will be significantly different then the past – so much so that the very survival of the human race is in serious doubt.

It feels good to begin a new chapter in life. Feelings of euphoria, freedom and adventure, along with a little bit of uncertainty. Assuming I remain in control of events in my life of course, but I will try my best. I begin again where I left off many years ago.

I ‘see’ a future for us all that is very, very different then the one we have today. No matter what your position is in this life, the future that I’m (still) preparing for is going to be radically different. There will be no ‘retirement’ for most of us (unless you can do this now). Adaption, mitigation and gearing each family towards survival will be the new normal for everyone.

A few days ago, this was the climate projection for the eastern United States and Canada – upwards of 45F hotter then normal – in December! 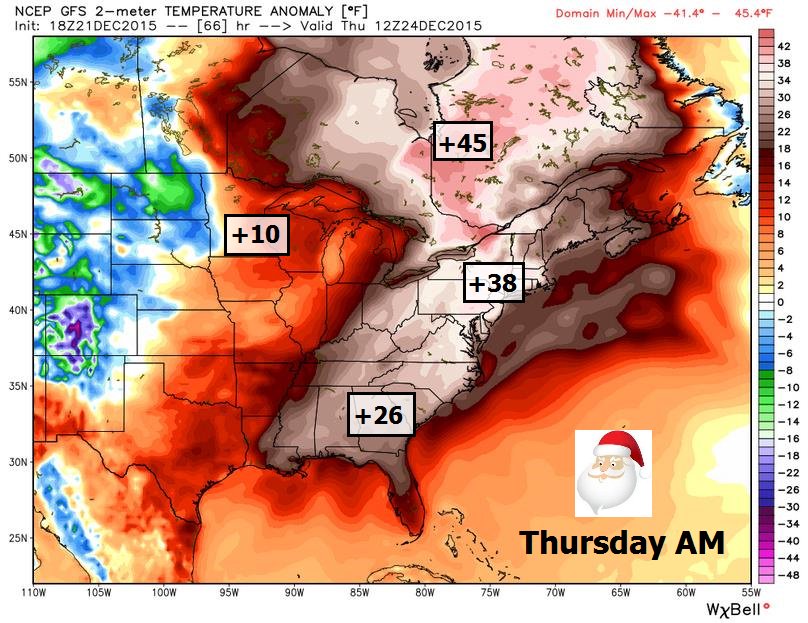 Some good information here on what is unfolding – Severe Weather Targets Mississippi,Tennessee Valley

Scientists say climate change could cause a ‘massive’ tree die-off in the U.S. Southwest

I take exception to this sort of journalism. The author is following in the footsteps (and some of his own) of disingenuous journalism.

“The study examined both an extreme warming scenario — which recent climate policies suggest we may be able to avert — and also a more modest scenario that would likely bring temperatures above 2 degrees Celsius above pre-industrial levels by the year 2100, but not necessarily by that much. The more extreme scenario was certainly worse for these trees, but even under the moderate scenario, the negative results were merely “delayed by approximately one decade,” the study found.”

The author is referring to COP21 (ConJob 21) which is NOT policy, it is simply an “agreement” that is NOT enforceable. Claiming that this policy “suggest we may be able to avert” is definitely disingenuous at best. It’s totally untrue, but the author inserts this promise into the article. It’s a false hope as the past 21 years of these “gatherings” and non-response has shown.

The rest of the paragraph then seeks to downplay the significance of what this means without revealing the whole scary truth of what a massive tree die-off really signifies (or hot it’s really going to get). This is horrible distracted writing being passed off as news.

Journalist are even worse then scientists (who are getting better) at reporting the unvarnished truth, who often write the “you’ll be ok” hokey pokey promises when writing about the unfolding climate disaster.

The public should know better by now – everything they claim that won’t happen is happening and you have to read carefully for what is being unsaid or ignored in these sort of articles.

This is what the journalist should have written:

“Averaging all the models together, the study results suggest that 72 percent of the region’s NET forests will die by 2050, with nearly 100 percent mortality of Southwest U.S. forests by 2100.”

Scarred riverbeds and dead pistachio trees in a parched Iran – ‘I have bought myself another 15 years. After that, this place, like everything else here, is done for.’

Anybody besides me foresee a truly MASSIVE refugee problem developing here?  It’s going to far, far higher then the 1 million and counting refugees in Europe. What about food production? What about resource decline?

Journalists have yet to make the real connections here that are unfolding worldwide. What they’re putting into print is severely watered down ‘reporting’ with promises that we’re still going to be good to go. Go where? Do what? None seem to realize what lies just ahead – or they’re not being allowed to share their real thoughts.

The right-wing is very guilty of spreading widespread ignorance and denial. While I do think Con Job 21 is pretty terrible and very, very late in the game (there’s been no less then 20 former failed attempts mind you) – it’s still the ‘best’ humans have managed to cobble together. Yet this fucking idiot wants to stop even this:

Humans are hopeless, plagued by stupidity, ignorance and superstition within a significant percentage of the population. We even (s)Elect these idiotic morons to the White House! How dumb is that?

Here’s a commentary from Scribbler’s blog regarding the insanity of U.S. Republicans and political “leaders”:

“At the AGU meeting one of the frequently discussed topics was the political attacks that scientists face from U.S. Republicans. It’s complete insanity that we still have an entire political party who thinks the Earth is flat. Yet these troglodytes embrace science when it gives them electricity, ac, planes, automobiles, computers and smartphones, medicine, etc. etc. They are the sole reason for inaction, and posterity should remember who it was that destroyed their once habitable planet.”

There is an entire segment of society, both here and in England that is stupid as f*ck. They’re so stupid they go around bragging about how stupid they are. It’s their badge of honor. More like horror – what they’ve unleashing upon humanity has been an absolute disaster.

It’s time to regulate these morons as the planet-destroying humanity-extinction vermin they are. They’re going to inflict Dante’s Hell upon all the rest of us. We should build them all a cage at sea level and let them go on bragging about how ‘right’ they are about climate change.

I’m not a Democrat – or a Liberal – or a Conservative – or an Independent – or a Libertarian. They don’t have a label for my brand of politics or philosophy. I find each of these groups deluded, misguided and misinformed about reality. Virtually ALL of these groups are leading the world towards destruction and death with their own misguided version of ‘this is how it’s done’ playbook. I want NONE of these vermin ‘in office’ governing human affairs to be honest, they’re not qualified because they refuse to see the world as it really is.

I believe in liberty, freedom, responsibility, conservation, the environment and much more. I despise superstition, ignorance, denial and fear-mongering. Reality is far more preferable then pretending. The ‘stupid gene’ that seems to be inherent in the species can be overcome through education and effort. It does not require a formal education either – just a curious mind that questions everything, sorting out the good from the bad, the disingenuous from the truth. Distracted minds need not apply.

Sane voices are rare these daze. The world has gone insane, reacting to shadows and ghosts and listening to fables and fantasies. American politics are such a joke now that it’s impossible to stomach their disconnect from reality. Turn it off. There’s definitely better ways to spend your diminishing quality of life then watch these clowns browbeat one another with accusations and deceptions. The Theater of the Absurd is what we have once again for (s)Election 2016.

4 thoughts on “Politics & Climate Change – The Theater of the Absurd”