Yesterday, I came across something this is very important.  The ramifications of this are incredibly serious.

In this article, North American Forests: When the Colors of the Trees Change, massive amounts of North American forests are being wiped out by the bark beetle.  Due to warm winter temperatures, winter survival rates of larvae shot from just 20% to over 80%, causing a massive population explosion. More beetles means more trees attacked and killed.

By 2010, over 30 billion trees have been killed. Logging operations to combat the infestation has resulted in even more tree loss, including many healthy ones.  In British Columbia alone, over 18.1 million hectares are considered contaminated by 2012. In the lower 48, hundreds of millions of tree are already dead and dying. Western forests are at risk of being virtually wiped out.

But it gets worse then this.

Ahead of us we have the possible destruction of forests, vital in maintaining oxygen levels necessary for life, in the control of carbon dioxide, and in water cycle balances. Notably, the concentration of oxygen in the atmosphere has dropped from 35 to 21 percent from prehistoric times to now, and the carbon dioxide has increased in part by the human growth pollution in cities with high oxygen levels, which often comprises only 15 percent of total air. So at this rate it is obvious that in these cities we will render the “air” unbreathable. Diana Beresford-Kroeger, a botanist, says, “the abuse of forests and pollution of the oceans has caused them to produce only half the oxygen (they produced) 10,000 years ago.”** We must also consider that in the last 30 years this process has accelerated the deterioration or the collapse of almost all living systems.

This paragraph really stuck out, so I began to research the facts.  Are cities really losing their oxygen?

Dangerously low levels of oxygen are now being reported in cities around the world.  Increased carbon dioxide levels are displacing oxygen in the atmosphere.

We are losing three oxygen molecules in our atmosphere for each carbon dioxide molecule that is produced when we burn fossil fuels. Studies of ice cores and recent data from direct atmospheric sampling have shown that there has been a 30% increase in carbon dioxide since the beginning of the industrial age. Atmospheric Oxygen Levels Fall As Carbon Dioxide Rises

The burning of fossil fuels (all of them) is causing an oxygen loss:

The O2:C combustion ratio of a fossil-fuel depends on the hydrogen content. The ratio varies from about 1.2 for coal, 1.45 for liquid fuels, and 2.0 for natural gas. Taking these factors together, we are losing nearly three O2 molecules for each CO2 molecule that accumulates in the air.

The simple but frightening sum total is this:

Millions of hectares of trees (billions and billions of trees) which produce oxygen and absorb carbon dioxide are being lost (and then burning up, releasing their stored carbon into the atmosphere).  Lest we forget, deforestation is accelerating all over the world, especially in heavily treed places like the Amazon, Papua New Guinea, Madagascar and tropical forests around the world.

Oceans are now saturated and acidic, having absorbed all the carbon dioxide they can (leaving the remaining in the atmosphere). There are also truly massive “dead zones” in the world’s oceans (still growing in size and number), depleted of life and oxygen. Burning fossil fuels destroys on average 3 oxygen molecules for each carbon dioxide molecule produced.  All this is causing alarming oxygen level drops.

How alarming?  Some cities are down to just 15%, far lower then safety standards dictate.

If the oxygen level in such an environment falls below 19.5% it is oxygen deficient, putting occupants of the confined space at risk of losing consciousness and death.

Closed spaces are key here, apparently, as lower oxygen levels then this are already being detected over our cities. 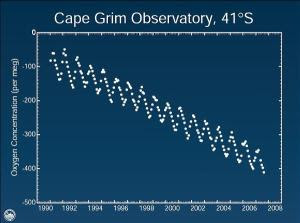 Stunned scientists warn world could run out of breathable air

According to the data Keeling has meticulously collected since 1989 the world is running out of breathable air—and the rate that it’s losing oxygen is now on the verge of accelerating.

Monitoring oxygen levels around the world is Keeling’s job. He’s very good at his job. And the data confirms that Earth’s oxygen supply is dwindling.

Keeling created the famous ‘Keeling Curve,’ a graph that extrapolates the current trend of the oxygen depletion in the atmosphere.

Gary Shaffer’s worst case scenario predicts that the oxygen levels in the oceans may drop by more than 20 per cent in the years ahead. [4]

The dead zones continue to expand and the areas of oxygen depletion are accelerating.

Warning sign two: forest charcoal — Forest fires provide a measurement of the ongoing depletion of Earth’s oxygen. Fires in an oxygen rich environment leave little or no carbon residue. The less oxygen available for combustion, the more charcoal remains as fire is unable to consume all the combustible material.

Over the eons, forest fires have produced greater and greater quantities of charcoal as less oxygen rich air causes fire to burn less efficiently. As the oxygen levels drop, more charcoal residue is produced. This is exactly what has been happening and the phenomenon is well documented.

Warning sign three:  methane and rapid Earth atmospheric change — Experts such as Northwestern University’s Gregory Ryskin (creator of the methane mass extinction hypothesis) have painted a scenario that could account for mass extinctions from terrestrial oxygen depletion.  While not a formal part of his hypothesis, the events Ryskin envisions would certainly lay the foundation for a rapid acceleration of oxygen depletion and the resulting mass death to follow—mass death on a planetary scale.

The ability of forests to soak up man-made carbon dioxide is weakening, according to an analysis of two decades of data from more than 30 sites in the frozen north. The finding published today is crucial, because it means that more of the CO2 we release will end up affecting the climate in the atmosphere rather than being safely locked away in trees or soil.

The rise in CO2 levels in the atmosphere is accelerating. Between 1970 and 2000 the concentration rose by about 1.5 parts per million (ppm), but since 2000 the annual rise leapt to an average of 1.9ppm – 35% higher than expected. Part of the rise is due to increased CO2 production by China, but the team said weakening carbon sinks were also to blame.

We also know that warming of the planet is increasing the decomposition of decades-old carbon in our forest soils. In fact, there is a lot of related data regarding how carbon contribution to the atmosphere (natural variations) are being increased (such as limited carbon uptake by forests exposed to high levels of carbon dioxide, growth increase for 2 – 4 years and then drops off).  The nutrient cycle is also negatively affected by higher carbon dioxide levels, especially in poorer soils.

It all adds up to more bad news.

We do know that in many cities around the world, smog will “hang” over cities for months at a time, until finally drifting away, but it is by no means “gone”.  Guess where it goes?  Over our forests, killing even more trees as Wits End points out.

Smog particulates are larger then oxygen molecules, so the rate of “exchange” of oxygen with higher concentration from other areas may be a bit faster then the dissipation of smog, but it’s still a closed system, which will eventually be the same everywhere.

This means that cities are not only a threat to humanity, but a threat to themselves. Their very structure and design as we know them today suggests that they are making a massive contribution to climate change effects and oxygen depletion.  But they are by no means alone, it’s just a worthy observation.  It is industrial civilization that is to blame, and over consumption / overpopulation, putting too many demands upon planetary resources while burning fossil fuels.  There is simply no escaping this root cause, it is the baseline for everything this is going wrong with our world.

I think that this topic is yet again, another one of these “scientific reticent” issues, whereas the data and knowledge are “there” for examination, but due to reluctance, vertical disciplines (unwillingness to identify related issues), compartmentalization and political pandering, this issue of global oxygen levels is being grossly ignored at our own peril.

The pace of oxygen depletion is speeding up with more and more industrialization, population increase, fossil fuel burning, ocean saturation, growing dead zones, forest kill and depletion, desertification and deforestation, and even the loss of phytoplankton in the world’s oceans.

The issue is quite serious and once again, little is being done to address this as the world plunges headlong towards its own destruction.

5 thoughts on “Oxygen Levels Are Dropping”