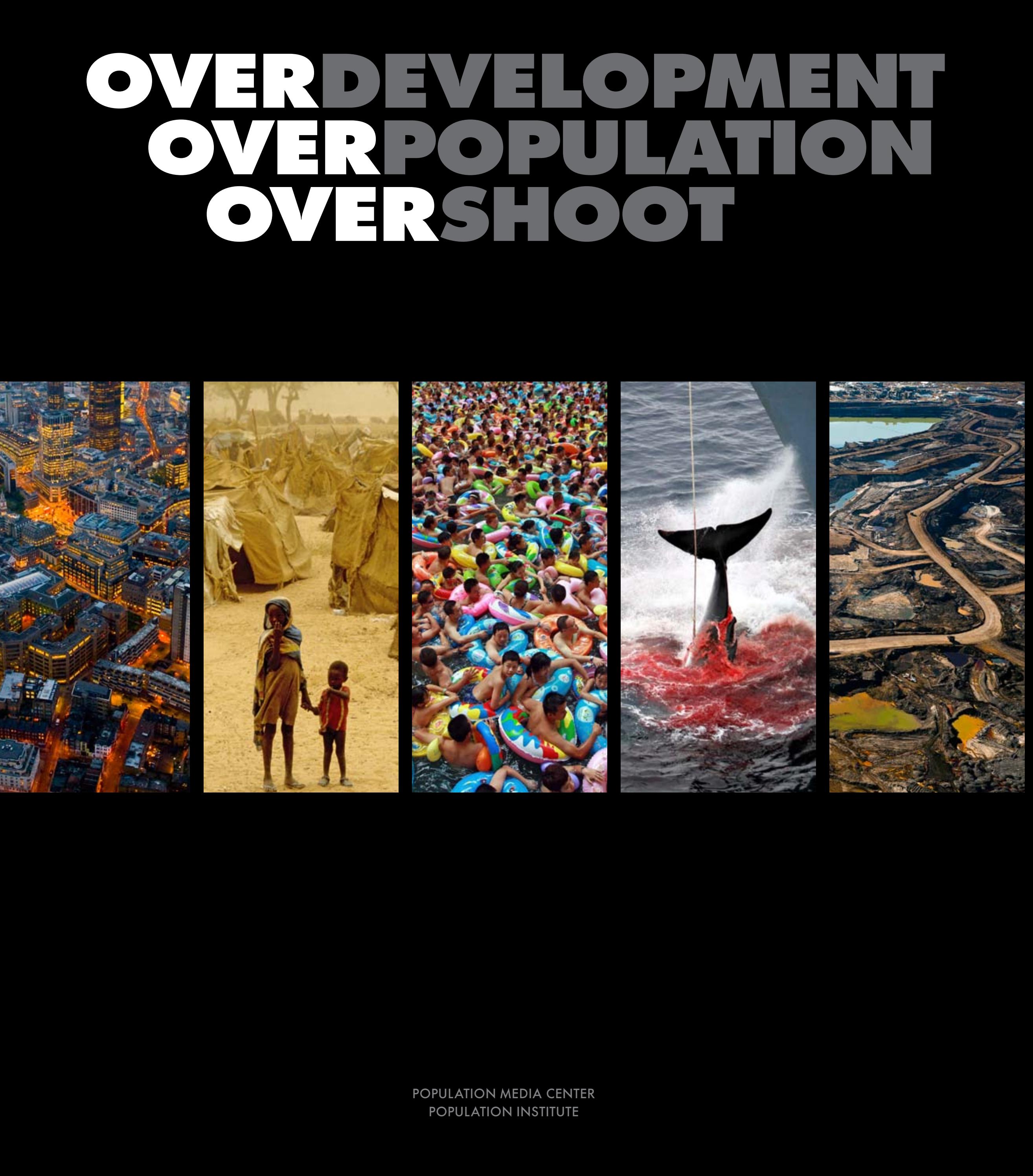 The world is headed for swiftly headed towards catastrophic ecological disaster. The reason and cause is termed “overshoot”, which will be accurately defined here.

There are many symptoms and signs of ecological disaster now happening around the world. I’ve long focused on global climate change, the dangerous heating of the Earth’s surface and the resulting effects that threaten the future survival of mankind.

All of these parallel systems of ecological overshoot have experienced excessive destruction, pollution and consumption by a single species grossly exceeding the natural carrying capacity of the planet – humans.

Humans have greatly exceeded the bio-generative and ecological capacity of the biosphere making future habitability of the Earth in serious if not severe doubt.

Renewable energy requires fossil fuels to come into existence. Every single aspect of these technologies, whether wind, hydro, solar or geothermal are completely subsidized by fossil fuels. They are all reliant upon vastly depleted fossil fuels and have produce huge amounts of toxic byproducts, requiring irreplaceable increasingly hard-to-find non-renewable rare earth metals. Renewable energy technologies are “expenditures” of fossil fuels in a different form.

We already know the monumental drawbacks to fossil fuels, which are not sustainable, as easy-to-find and develop energy supplies have all been quickly consumed, triggering global climate change (global warming) at an unprecedented scale in Earth’s history. The root cause of this is excessive energy demands by too many of our own species using highly pollutive technologies. We cannot replace this energy demand with another expenditure of fossil fuel in different forms and expect different results then what we have already seen.

Both fossil fuels and renewable energy have significant drawbacks and problems. Pollution of the air, water and soil globally is largely invisible but already at extremely significant levels on a global level. The collective and fatal problems with renewable energy include their requirement for rare earth metals and their methods of extraction and production. The notion that our species can incessantly increase energy consumption and demand without increasingly destroying the biosphere is simply false.

200 years ago at the beginning of the Industrial Age, the global population of homo sapiens was eight times smaller. At present, population is increasing twenty times faster. Over one-half of the entire land surface of the Earth has been substantially modified and converted (terraformed) for human kind, particularly for agriculture and the production of food, the core reason for “civilization” (food production). Agriculture is one of the most ecologically damaging technologies ever invented, displacing non-human species throughout the Earth.

Prior to the invention of agriculture, humans accounted for less then 1% of the mammal biomass on Earth, and wild mammals accounted for 99%. Today, humans constitute 36%, domestic livestock another 60%, with only 4% now left for all wild species. The population of non-human vertebrate species has declined by 58% between 1970 and 2012. Freshwater, marine, and terrestrial vertebrate populations declined by 81%, 36%, and 38%, respectively, and invertebrate populations fell by about 50%.

Over 50% of all fossil fuels were consumed in just the past 30 years and as much as 90% since in the early 1940’s as super-exponential growth took hold of the global economy. Carbon dioxide emissions exploded, vastly exceeding photosynthetic uptake by Earth’s flora. Since 1997, just 24 years ago, fossil fuel consumption has jumped 40%, producing a corresponding jump in greenhouse gasses, vastly exceeding carbon fixation by photosynthesis. At present, atmospheric carbon dioxide levels have increased 48%.

These data show that plunging biodiversity and climate change, along with air/land/ocean pollution, deforestation, desertification, incipient resources scarcity, etc., are the inevitable consequences—indeed, parallel symptoms—of the same root phenomenon: the spectacular and continuing growth of the human enterprise on a finite planet. Homo sapiens is in overshoot, exploiting ecosystems beyond their regenerative and assimilative capacities.

Overshoot is possible only because of: (a) the short-term availability of prodigious stocks of both renewable (fish, forest, soil, etc.) and non-renewable (coal, oil, natural gas, etc.) forms of so-called “natural capital”; and (b) the enormous, but finite, natural waste assimilation and recycling processes of the ecosphere. However, a reckoning is at hand. In just a few decades of geometric population and economic growth, humans have exploited (often to collapse) natural capital stocks that took millennia to accumulate and have impeded natural life-support processes through excessive, often toxic, waste discharges. The human enterprise now uses the bio-productive and assimilative capacities of 1.75 Earth equivalents [16]. In simple terms, the industrial world’s ecological predicament is the result of too many people consuming too much and over-polluting the ecosphere.

Clearly, the climate crisis cannot be solved in isolation from the macro-problem of overshoot—certainly not by using technologies that are reliant on the same FFs and ecologically destructive processes that created the problem in the first place.

Through the Eye of a Needle: An Eco-Heterodox Perspective on the Renewable Energy Transition

The link above reveals the extent of the problem, while offering a modicum of hope for a possible solution including a “Big Picture Sanity Check” that reveals the severe problems in trying to overhaul the United States grid system. The reality is the numbers are unachievable – too expensive, too little time, and even if it could be done, it would have to be repeated every 15 years.

You should read it, because we cannot do it. It will not work. It is destined to fail. All the hype and propaganda about renewable energy technologies is grossly misrepresenting the reality of why this will not work. We can perform this on a far smaller scale for far fewer people then claimed – and nothing more. Biosmass, hydrogen, geothermal, nuclear, concentrated solar power (CSP), solar PV, and wind turbines, are all derivatives of fossil fuels, which means the problems we have long associated with fossil fuel consumption and availability will still exist.

This would be a good place to interject “I told you so, repeatedly” right here on this blog. Renewable technologies will not solve our energy problems or climate change or anything else. They will in fact only help make things worse then they already are. By embracing these technologies they will ensure we consume virtually all the fossil fuels and rare earth materials on the entire planet, and that cannot be allowed to happen if we hope to save the biosphere for habitability (human survival).

But the real problem is ecological overshoot by our own species. So far, little has been said about this primary issue and even less proposed. I have, many times, with this simple saying – What the world needs, what humans need is less of everything. Endless growth and expansion on a finite planet running out of resources is suicide. Expecting technology to somehow save us from excessive greed and consumption utterly fails to address the root cause. We need to engineer a completely different civilization and way of life. In these and many other ways, I have for years extolled the basic idea that we need less (and can do with less) and we won’t solve anything unless we do.

That’s going to have to start with us – humans. Too many humans making too many demands. Too many humans not giving a damn about how much destruction and waste they are causing. Too many humans embracing truly stupid ideologies and engaging in entire lifetimes of pointless pursuits. The present global population of humans now only exists because of excess production. This allowed our species to explode across the Earth with little thought to the consequences of this growth. But now we know, if we could find it within ourselves to admit to the terrible truth, we are the problem. We’ve always been the problem.

We’re going to have to control ourselves and limit our greed, our consumption and our growth if we ever hope to have a chance at a sustainable future. As it is, we have none of these things now. This is the conversation that the world doesn’t really want to have, and that’s why you rarely hear anything at all about it. This contradicts the basic economic model our entire civilization is built upon, overshoot. Humankind has vastly exceeded the carrying capacity of the planet, leaving an enormous waste stream of dangerous pollutants in the air, water and soil throughout the entire Earth.

Only a suicidal species would do this – or one with the technological prowess to ignore it for as long as possible.

It’s late and I’m really busy these days, so I’ll stop here, but I’ve more thoughts to say on this topic. Arnold Toynbee did too and I want to share them with you as soon as I can because he’s right and very well informed – we are in serious trouble. All of us, nobody is going to escape this. I’ll put up a Part II to this article next.