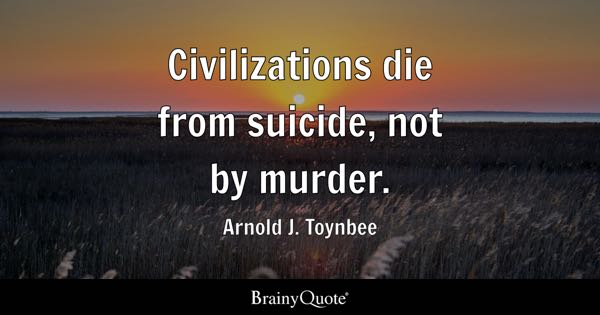 (Overshoot, Defined – Part I can be found here).

Arnold Toynbee in “Mankind and Mother Earth” outlines a narrative history of the world. Encompassing 21 different civilizations, Toynbee’s final work reveals a lifetime of understanding and applied study to the history of man.

Considered one of the world’s best historians, and a philosopher of history, Toynbee was a major figure in historical literature. Of the 21 previous civilizations, only 5 still survive today: Western, Orthodox Christian, Islamic, Hindu, and Far Eastern. His final book tells us why these too will collapse and fail. Another reader might conclude that Toynbee was offering a modicum of hope in his last book, but I disagree. I think Toynbee finally understood the hubris of humankind and the folly of what we’ve done to ourselves and to the only planet we can live on.

Toynbee expresses is final thoughts at the end of his life, which was spent in the study of history. Wiping away the facade of historical lies and deception, the next to the final chapter titled The Biosphere lays it all bare: we have rapidly destroyed our planet. Covering the period of 1871 – 1973, Toynbee shares a few words:

By the 1970s it looked as if the biosphere was in danger of being overwhelmed, polluted, and perhaps ultimately made uninhabitable for any form of life by one of the biosphere’s own creatures and denizens, Man. Retrospectively it could be seen that Man’s power over the biosphere had been increasing progressively.

Since the beginning of the Upper Paleolithic Age, perhaps 70,000 / 40,000 years ago, Man has been taking the offensive against the rest of the biosphere; but it is only since the beginning of the Industrial Revolution, no more then two hundred years ago, that Man has become decisively dominant. Within the last two centuries, Man has increased his material power toa degree at which he has become a menace to the biosphere’s survival; but he has not increased his spiritual potentiality; the gap between this and his material power has consequently been widening; and this growing discrepancy is disconcerting; for an increase in Man’s spiritual potentiality is now the only conceivable change in the constitution of the biosphere that can insure the biosphere – and, in the biosphere, Man himself – against being destroyed by greed that is now armed with the ability to defeat its own intentions.

Our economic and material gains vastly outpaced our social structures, which largely failed to adapt. More to the point, we as individuals also failed to evolve, even reverting into a more selfish state, embracing materialism and greed over personal development and knowledge.

In the 1970s the devastating effect of Man’s impact on the biosphere is being demonstrated by a number of symptoms. The biosphere’s human population is increasing at an accelerating rate, and this growing population is concentrating itself in gigantic cities.

The cities are spreading tentacles round the globe in the form of speedways for mechnized overland vehicles and air-lanes for planes. The minority producing industrial commodities, or food stuffs and organic raw materials, by more and more sophisticated and high-powered mechanical process is polluting  the biosphere water-envelope and air-envelope with the waste products of its pacific activities, even when it was not defoliating the flora and killing the fauna (humans and non-humans alike) by intentionally destructive military operations.

It’s 2021 and his words are just as accurate today, as they were 45 years ago when this was written. Nothing has changed, everything has just become immeasurably worse. Most of us alive today were born into these worsened conditions of the biosphere and simply have no idea what the world has lost. How nature itself has been changed, supplanted, uprooted, bulldozed and turned into massive monoculture plantations and ecological dead zones. Even the forests now are no longer ‘natural’. Microscopic plastics have been found now at the highest elevations on the planet, and in the deepest trenches of the oceans and in the farthest reaches found at both the North and South poles. Our ecological damage and destruction is now found absolutely everywhere.

For billions this may seem to be very normal, having never known anything else, or even comprehending that what we still have left today is very different then what once existed just two hundred years ago. The Industrial Age poisoned and polluted the world at the hand of the money changers and profit makers who foisted their global enterprises upon the whole of mankind and the fauna of the Earth. Converting raw materials stolen from ancient forests and remote regions into today’s fashionable trinkets and toys for a rapidly exploding population, the Earth was strip mined for resources as fast as humanely possible, leaving behind enormous waste streams in the air, water and soil that will last for hundreds of thousands of years.

This production enabled the human population of the Earth to literally explode, overtaking the entire planet with our species and projecting our impacts throughout the world. What was once quite inconceivable was not, as new technology and innovations and inventions proliferated the reach – and the poisons – of mankind throughout the Earth.

Man’s capacity to make the whole biosphere uninhabitable is apparent in the extermination of a number of undomesticated non-human species of living beings, but Man himself and his domesticated animals are not immune. Some of these, too, are being poisoned by unintended consequences of deliberate human activities.

Toynbee writes of the “physical growth of the world” (civilization) being absolutely enormous for someone born in 1889 and then living into the 1970’s. I could say the same, since I was born, I have seen and participated in enormous changes to the planet and the cities and towns that have grown from small burbs to staggeringly high levels of sprawl and populations. I spent years looking for a way to escape such places which are now nearly impossible to find.

Toynbee saw two world wars, I’ve seen countless regional conflicts (already) with more sure to come. Genocide in Toynbee’s time was abhorred and rejected, just as it still is today as it continues to plague the world even now. Nothing has changed. His ‘wars of religion’ descriptions can be easily applied to the 21st century wars of religion that still rage. Nothing has changed. Even the players remains the same, and so does the indoctrination and propaganda that goes along with it. Mass migrations then and now are similar, people fleeing conflict, death and suffering – and devastating environmental collapse always following behind.

It’s sad actually, to realize that except for the dates and the references to certain names and places, nothing has changed. We have the same problems as always, and even the same horrific issues that plague our species. Ecologically speaking, the environment is significantly worse now then even then, resembling nothing of our ancient past except the same coastlines and endless tossing of the ocean waves. Everything else based on land has seen stupendous changes, none for the ‘better’ as mankind plunders his way through every resource he can find, carting it all away to be sold for a profit.

I blame civilization, this civilization, the one that I was born into, but it’s possible that has never really gone deep enough in understanding. Toynbee’s civilization was just like this one, ours is only an extension of his after all, and we’ve all failed at all the important lessons that we should have learned but forgotten long, long ago. We still have the same senseless wars, the same insatiable greed, the same profit motives (or worse), the same corrupt politicians and inept leaders, the same short-sighted thinking. In all respects, it’s the same as ever, but only worse, as far as I can tell. Nothing has gotten any better.

Everyone has been told about the “Earthly paradise” that is promised to exist “just around the corner”. Toynbee writes of this too, but we’ve all heard it. Social media was supposed to revolutionize the world, but only made it worse. Reaching Mars is supposed to offer hope to mankind, but will only make it worse. Renewable energy technology is supposed to defeat climate change, but will only make it worse. More isn’t always better, more can often be worse then before. But you have to develop the right perspective and understanding to know why this is factually true.

A recent research paper showed that the switch to electric vehicles would not be a good idea for most people or for the planet, because this will increase global pollution. A new electric vehicle may sound nice, but their resource demands versus what you already have are enormous. That car your presently driving is already a part of the global waste stream, but a new electric vehicle that hasn’t yet been built (and thus, it’s raw resources remain unused and likely, still in the ground) represents a big jump in resource consumption and pollution contributions.

This is why I continue to argue that the world actually needs less of everything. Less consumption, less profits, less resource extraction, even less people. We’re way, way into global overshoot on people, consumption, and waste generation. We’re still acting like an infinite world is just out of our reach if we just manage to develop some new whiz-bang technology that let’s us “have it all”.

This is a complete fantasy – we DID have it all – and we WASTED IT. And since we haven’t changed one bit, it’s quite ludicrous to assume that we’d get it right the next time should we ever get the chance. There is also Jevons Paradox – we’ve also wasted every new ‘efficiency’ we’ve ever devised, none of this has ever actually ‘saved’ anything. We always consume it all and then demand more.

The future does not yet exist; the past has ceased to exist, and therefore, in so far as a record of the past survives, the recorded events are immutable.

You can only understand where we are today if you conscientiously increase your perspective, otherwise it will be hidden from you. This will limit your knowledge and understanding. We (humankind) all used to live very different lives then what we have today and for hundreds of thousands of years, we didn’t wreak the planet. But in a very short time, we’ve broken that intrinsic agreement of survival and triggered catastrophic and potentially irreversible changes that now threaten our very survival, and that of the entire biosphere. That is the perspective that we must embrace. It is the irrevocable truth of our present predicament.

And in Toynbee’s final words in his final book in the final chapter:

Will mankind murder Mother Earth or will he redeem her? He could murder her by misusing his increasing technological potency. Alternatively he could redeem her by overcoming the suicidal, aggressive greed that, in all living creatures, including Man himself, has been the price of the Great Mother’s give of life. This is the enigmatic question which now confronts Man.

I think a few of us know that answer now.