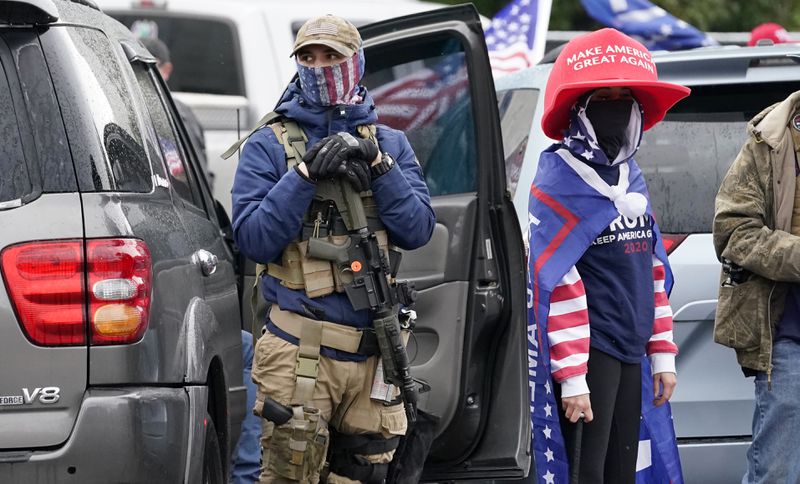 There is a new definition for MAGA and it’s much more accurate too: Morons Are Going Away.

Except their not really going away. They’re still here and they still believe in the same things as before. Which is kind of sad. This would be the perfect opportunity for the MAGA crowd to learn something new, but I haven’t seen any evidence of this just yet. Perhaps it is too soon?

Or perhaps it is too much to expect? I’m not sure, but I’m willing to take a wait-and-see approach. It’s a hard thing to realize that your world view was built upon a lie. There is a lot of soul-searching that must transpire first. We could help them if they ask – but I’m waiting for that to happen too.

The few MAGA supporters that I know personally are stupidly raging on about stupid things. Are we now going to go to war with China? That must be true! There’s going to be civil unrest! Oh, what do you think about all the Chinese troops hiding on the Canadian border? That must mean something!

A crazy as this sounds, I’ve read much worse which I won’t bother with any air time here.

Delusional and psychotic episodes aside, the gut-punch disappointment isn’t a pleasant pill to swallow. It’s what we had to do in 2016. And we did, but we didn’t throw up endless lies and temper tantrums, or watch the Commander in Chief go into bunker mode, refusing to accept the results of the Election. We’ve never seen THAT before. But given the character and nature of Donald J, it’s not a surprise at all. He has no integrity.

Now he’s promising to hit the road again – and hold rallies as if the Election never happened. This is one seriously deluded man, who just happens to have the nuclear codes to America’s arsenal. Today, we learned that he’s abruptly fired Defense Secretary Mark Esper. Trump’s retributions are already underway. Esper refused to use the Insurrection Act to quell the riots this past summer, and rightly so, as it wasn’t necessary. And Trump didn’t forget, or learn himself even since then that it wasn’t necessary, so now the retributions begin.

Trump’s rallies are likely to be a call to arms, if you were to ask me. The still-sitting President wants to start a civil war to preserve his seat in the White House.

Yeah, he’s that special kind of stupid and that deranged. Trump’s always had a knack for getting other people to do his dirty work for him and avoid the blame, so watch out for this too.

His modus operandi is to pretend he’s kidding, or he “didn’t really say that” when he’s clearly did. There is no reason whatsoever for Trump to continue his rallies, his popularity is already plummeting like a like a dead bird falling out of the sky, and this ploy will be seen as a gravestone upon his miserable years in Office.

Trump’s epitaph is not going to be pretty and it seems like he’s doing everything possible to make it ugly as he can.

So all this means, as a result of the ‘latest’ claims from the sub-par party of Stupid, his morons are actually not going away – they’re going to take up arms and start screaming for bloody murder.

Unless somebody puts a stop to this insanity, like right now. Do we even have anyone that can do this?

Maybe – the States could refuse to allow these events to take place, leaving Trump with no venues at all. The Governors could agree that this non-peaceful failed transition of power will not get their support in any way, shape or form. And they could use the National Guard to help enforce this if they must. Do we have Governors with the backbone to say no, everywhere? Unlikely.

So this means we’ve got another Constitutional crisis on our hands and no clear way out. Trump won’t be able to use the military himself, I see zero chance of that happening. But he’s sure to go kicking and screaming and blubbering his way to unforgettable global infamy. It’s already started and expect it to get much worse.

Everyone needs to think on this, hard – because if this does come to pass, we’re going to need some clear options. The fate of this country depends on it.