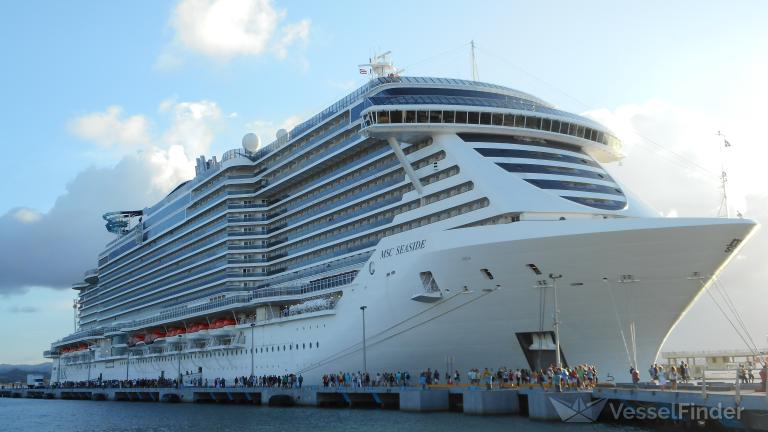 Watched this film. What a staggering waste this ship is (and others like it). Perhaps this is the height of human hubris to build such a wasteful monstrosity.

In a time when the world’s resources are being quickly depleted, those that can afford a ‘cruise’ (floating city) like this can overindulge themselves in a last hurrah before humanity self-extinguishes.

The film depicts extremes, extravagance, excesses and greed without meaning to. Workers are worked like dogs, virtual slaves to the ‘industry’ that demands their ultimate sacrifice spent onboard, deep inside a floating metal coffin, slaving away night and day for the ‘vacationers’ boozing and eating it up. The amount of pollution, food, fuel, water and power this one ship alone consumes is astounding. The sheer scale and representation of stupendous absurdity onboard with over a dozen restaurants, bars, showers, pools, slides, games, entertainment venues and more makes me wonder why anyone would even consider setting foot on such a monstrosity as this.

Supposedly this is a technological marvel, but what it really is is a representation of humanity run amok with the application and manipulation of technology against nature itself. It’s not a ‘cruise’ at all, it’s an extreme entertainment hotel (needlessly) floating on water for the uncaring greedy and selfish humans who can afford it while blithely helping destroy what is left of a dying planet.

One of many just like it, in an industry that is exploiting labor, resources and nature to enrich their stock values. This is a monstrous embarrassment writ large and despite it’s supposed ‘marvels’ of technology and engineering, this should have never been built. Just because ‘we can’ doesn’t mean we should. The carbon footprint alone is gargantuan, and the amount of resources to keep this ship operational are completely beyond absurd.

Why take any pride in such abuse? Why showcase the impossible extremes as if they were something cause cé·lè·bre? Gigantic cruise ships will have a very limited life due to the quickly depleting world resources they require. COVID-19 showed them to be gigantic floating coffins. They’re not all fun and games, especially to those that must labor like dogs in the bowels of the ship, night and day until they burn out. This is an ‘industry’ that needs to end, now. One of the most wasteful things humans have ever devised.

What this tells me in just one notable example, is the reality that nobody is going to change civilization and avoid our collapse. It’s like this gigantic ship, you can’t stop it. You have to let it drift into position even after all the props and thrusters are turned off. It’s not actually steerable. It’s so big that you have to work with wind and tide and currents and hope that you don’t damage the thing when trying to dock.

Civilization is just like that, it’s not steerable now. It’s way too big, far too monstrous, plowing ahead with the entire weight of a global civilization pushing it forward. There is NO WAY this is going to be changed to preserve enough of what is still left. No, the exact opposite is going to happen, civilization will absolutely DEVOUR everything this is yet left as it utterly fails to self-correct and will come crashing into the dock, smashing everything in it’s way. It’s a trillion trillion tons of extreme greed, overproduction, overpopulation and rapacious hunger that can’t be slowed down for even one second. It’s no wonder the planet is dying all around us, how could it not under such a staggering assault?

When you realize that there are things like this monstrous ship being built all of the entire planet and the staggering amount of resources and energy being used to produce them, it dawns on you that we’re never going to change in any meaningful ways as a species. This is what we do (now). This is what we fully intend to keep on doing. We have no real intentions of preserving anything that is left on this planet for future generations, it’s ours for now (supposedly), and we’re going to use as much of it as we possibly can, even if it means there won’t be enough for our own kids.

Of course, this is a recipe for collapse. Gigantic cruise ships will eventually be mothballed, or turned into floating casinos or something, even if they don’t go out to sea anymore one day. But that day isn’t here and until the resources that they require are finally gone, that day won’t be soon either. Humanity will insist instead on devouring what still remains to perpetuate the promise land, the Disneyland mystique of entertainment, fun, excess and greed.

World leaders gather together multiple times per year to discuss the future, but ultimately it’s about maintaining business and trade. Pathetic efforts to reign in the devouring maw of civilization never accomplish much and never will. Every year, it’s just worse and worse. The hard-faced cliff of resource collapse will be the final crashing reality that some things should have never been allowed to exist.

I’ve no doubt that civilization and humanity will continue to ‘pivot’ to the next opportunity, the next resource, the next methods of profit, production and plunder whenever possible, it’s what we’ve also always done. If petroleum supplies finally and forever dry up, it will be ‘game over’, but undoubtedly much too late as extreme levels of carbon dioxide and nitrous oxide, sulfur dioxide and methane poison the planet beyond habitability. Extreme temperatures will have extinguished most life from the Earth, with most species starving to death before the oceans turned to acid.

That is the future of Earth, no doubt whatsoever.

Enjoy it while you can, because this juggernaut is unstoppable.