This is another example of judicial stupidity / abuse. These morons ruling from the bench are absolutely insane. 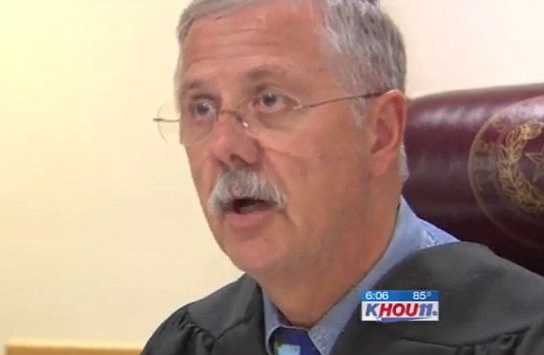 We’ve got a 17 year old high school honor student supporting her two siblings by working two jobs and trying to attend high school.  Why? Because her dead-beat parents split the scene and left her alone to fend for the family.

She’s missed some school (so what?), which causes the school to lose revenue (schools are paid Federal funds according to attendance).

Her ‘truancy’ however, is a crime in Texas, where they grow very, very stupid judges (not the first time I’ve seen Texas due some really stupid things in the courtroom).

However, the high-achiever cannot devote as much time as she would like to her schooling as she often misses an entire day, reports KHOU.

Ms Tran says that her parents divorced ‘out of the blue,’ leaving her and her two siblings to fend for themselves.

‘I always thought our family was happy,’ she said.

‘If you let one [truant student] run loose, what are you gonna’ do with the rest of ’em? Let them go too?’ asked Judge Moriarty.

He had warned her last month to stop missing her classes.

Ms Tran’s employer at the Waverly Manor wedding venue, where Tran works during the weekend, suggested that the authorities should ‘help [the family], don’t harm them’.

Ms Tran also works full-time at a dry cleaners. Her co-worker and classmate Devin Hill told the network how hard her friend works.

‘She goes from job to job, from school, she stays up ’til 7 o’clock in the morning to study’ she said.

The lesson here is virtually indecipherable (unless you’re a Texas judge).  Go hungry and attend school. Get thrown out of your home because you can’t pay rent. Do as the State demands or go to jail.  Grades don’t matter, attendance does.

She is old enough to simply quit school (I think, Texas “law” may have something to say about that), but her plans to become a doctor would of course be trashed.  A GED would get her past this, but she’s probably pretty close to graduation already, so that’s not necessarily a realistic option either.

The “example” that the State idiot is trying to set will be crystal clear to everyone: The State holds ultimate authority of your very life (or so they think); They WILL take physical control over you and your freedom; Don’t put family first; Don’t interfere with State revenue; and Don’t be a high achiever either, we’ll knock you down and teach you a lesson.

Of course when she graduates — she’s going to go right back to where Judge Stupid refuses to allow — work.

I predict however, that this will be the best thing that ever happened to her. The publicity over this story will give her something she’s never had and probably will have never achieved this side of a medical discovery.

As painful as this lesson is for her, it is really a lesson for all of us and how utterly out-of-control the courtroom really is. In addition to judicial malfeasance (and this is but an incredibly tiny example of the stories I’ve seen), the gargantuan amount of “laws” on the books are choking the very life out of the people they are alleged (and sworn) to protect.

No law should be obeyed if it interferes with your right to life or that of your family.  That’s absolutely INSANE.

One thought on “Judicial Stupidity In Texas”