Posted for entertainment purposes only – Jesus Lives in Siberia:

Why do these groups often fall into self-deception and delusion?  Land based sustainable communities are a great idea, but they need not be based upon cult followings.

Guess that makes this guy a false profit [sic]:

The year 2008 marked the last of God’s warnings to mankind and the beginning in a countdown of the final three and one-half years of man’s self-rule that will end by May 27, 2012.

Although the Church of God has not been accustomed to having a prophet for nearly 1900 years, God made him a prophet in 1997.

Wait! Wasn’t this supposed to happen last year on May 21st? 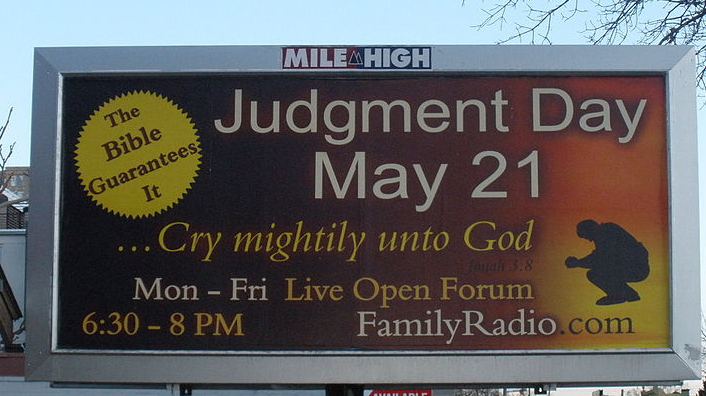 No doubt Ronald Weinland won’t be publishing much of a retraction on May 28th. None of these people ever do.  It’s easier to just move the dates and offer a weak explanation of how they somehow made an error.

Somebody should make a itemized list of the number of “Christ” that have come and gone, with no fulfillment of their proclaimed mission.  The number of predictions of His return is considerably higher.  By my count (and I do have a lot of experience with this), it’s several thousand failed predictions.

If you have never studied the common techniques used for brain washing people, you should.  Every cult I’ve ever examined uses them. The need to ‘belong’ and ‘participate’ in order to achieve the acceptance of the group is one of hundreds of tools used. A strong charismatic leader is also essential.

Is it harmless?  No.  Many fall away as they eventually discover the truth about what they once embraced. It causes a great deal of harm.

A nice follow up here – A Year After the Non-Apocalypse.

How can everything we’ve learned be a lie?

Easy.  Manipulate what people are taught to believe. Do it often enough and consistent enough and it takes on a life of its own. Build a gigantic edifice around it. Institutionalize everything about it. Indoctrinate, brainwash and manipulate converts.

It doesn’t take long, just a few years actually before you have invented a complete and total fabrication.

Before you get angry — look at every major religion of the world. How do you think they got their start?

They exist because we want them to exist, not because they are “real” or verifiable or even true. The human imagination is virtually limitless, we can conjure up gods or devils or demons or angels or saints at will. They’re “real” to us because we simply want them to be real.

But none of this is without harm.

What happened after May 21 matches up fairly closely with what scholars of apocalyptic groups would expect. The so-called disconfirmation was not enough to undermine the faith of many believers. From what I can tell, those who had less invested in the prophecy were more likely to simply give up and return to normal life. Meanwhile, those who had risked almost everything seemed determined to reframe the prophecy, to search the scriptures, to hang on to the hope that the end might be nigh.

I was struck by how some believers edited the past in order to avoid acknowledging that they had been mistaken. The engineer in his mid-twenties, the one who told me this was a prophecy rather than a prediction, maintained that he had never claimed to be certain about May 21. When I read him the transcript of our previous interview, he seemed genuinely surprised that those words had come out of his mouth. It was as if we were discussing a dream he couldn’t quite remember.

Other believers had no trouble recalling what they now viewed as an enormous embarrassment. Once October came and went without incident, the father of three was finished. “After October 22, I said ‘You know what? I think I was part of a cult,’” he told me. His main concern was how his sons, who were old enough to understand what was going on, would deal with everything: “My wife and I joke that when my kids get older they’re going to say that we’re the crazy parents who believed the world was going to end.”

In the beginning, I was curious how believers would react, as if they were mice in a maze. But as time went on I grew to like and sympathize with many of them. This failed prophecy caused real harm, financially and emotionally. What was a curiosity for the rest of us was, for them, traumatic. And it’s important to remember that mainstream Christians also believe that God’s son will play a return engagement, beam up his bona fide followers, and leave the wretched remainder to suffer unspeakable torment. They’re just not sure when.

Well, actually quite a few of them are quite certain, as the billboard, books, tapes, television interviews, magazines and tracts (and billions in donations) have shown. And when they’re let down by their fallen preacher because of disgrace, failed prophecy or prediction, they will regroup themselves, again and again and again. They convince themselves that only the “true believer” will not fall away.

If we ran any other part of our lives in this fashion, we would call ourselves dangerously deluded.  What investor, once having been badly burned, will believe another deceptive investment? Or what person who having helped someone only to have it thrown back in their face would do it again?

The problem with religious faith is it doesn’t require any proof.  Nor does it even require common sense. It simply requires belief — but not just any sort of belief. Unquestioning, unchallengeable belief. The normal rules of evidence, facts and proof are entirely absent. This makes it very easy to manipulate “believers” who are already persuaded to a particular point of view.  Preachers and profits [sic] will prey like wolves upon these people with total impunity. They are never held to account for their failed predictions — nor do they have to return any of the money that they have fleeced from their flocks.

It’s all rather sad and pathetic. It could all be readily avoided too with some common sense.