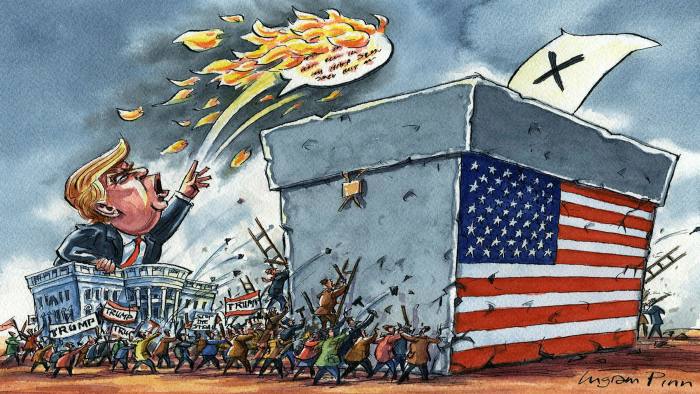 Why the Republicans’ Big Lie works so well: A sociopathic party, and a damaged country

As detailed by the International Statistical Classification of Diseases and Related Health Problems, exhibiting three or more of the following traits is sufficient for the diagnosis of sociopathy:

Callous unconcern for the feelings of others
Gross and persistent attitude of irresponsibility and disregard for social norms and obligations
Incapacity to maintain enduring relationships, though having no difficulty in establishing them
Very low tolerance to frustration, a low threshold for discharge of aggression, including violence
Incapacity to experience guilt or to profit from experience, particularly punishment
Markedly prone to blame others or to offer plausible rationalization for the behavior that has brought the person into conflict with society

The Diagnostic and Statistical Manual of Mental Disorders adds these two qualifiers:

Deception, as indicated by repeatedly lying, use of aliases, or conning others for personal profit or pleasure
Impulsiveness or failure to plan ahead

This article makes it perfectly clear the Trump’s party of fascists WILL take the lead again. One of the reason Liz Cheney remains the attack victim is because the Republican Party insists on total loyalty and they simply cannot tolerate having anyone who doesn’t subscribe to the Big Lie.

The Republicans are lining up all their forces to oppose any honest investigation into the Capitol attack. If they succeed, Trump & Company (all the leadership involved) will go unpunished when it is already plainly obvious they are guilty as sin.

It’s all a sham, a gigantic scam operation called Trump’s Big Lie. Trump set-up the entire country early on for this, months before the 2020 Election claiming that if he didn’t win, it would be because the Democrats “cheated”. He primed the pump and repeated the lie over and over again. Then when he lost, he was ready to strike and promote his Big Lie even further. It was a non-stop whirlwind of accusations and false claims and ridiculous fabrications ever since. 61 court cases failed to provide sufficient evidence. But the way to promote a lie is to never stop telling it, never admit defeat, never reveal that you know you lost, so that is what Trump did.

Then he and Giuliani and other promoted the Capitol attack, hoping they could stop the legal certification of the vote, but that didn’t work either, and now ALL of the Republicans are back-peddling and pretending they’re not involved when the exact opposite is true. They’re all part of the cover-up and deceit, attempting to re-frame the attack as a “tourist visit” and other such nonsense. Millions of dollars in damage was reported by the “tourist” who were deliberately seeking out law makers, calling for their hangings and executions.

This entire fiasco is a clown circus of extraordinary levels. Something you would have expected to see in a Banana Republic practicing a military overthrow or a dictatorship. But it’s very, very real and it happened in America and it’s still not over. The Republicans are trying very, very hard to create a fascist government and they’re definitely making serious headway despite Trump being out of office. And that should literally scare the hell out of everyone, Republican, Democrat or Independent, doesn’t matter which party you belong to, fascism will be a death blow for American freedom and likely, the entire country will implode if they succeed. Think The Handmaid’s Gilead and you’ll get the idea of what we’re facing.

Personally, I think civil war edges ever closer despite a change in leadership at the national level, whether they win or not.