The Most Dangerous Man In America – Youtube video clip

You should also watch this: Depleted Uranium, The Ultimate Dirty Bomb

It is the outrageous stupidity of the US government like this that tells me that we will never have any support for peaceful initiatives.  If they’re quite willing to irradiate entire countries for 4.5 billion years, what makes anybody think that we are going to peacefully solve our energy crisis?

There are a whole bunch of other videos here about “the wrong side”.

Since this message is alleged to have come from the dead Bin Laden, it won’t mean anything. It’s about as meaningful as all the other dead-letter messages from his ghost, which are meant to excite and stir the flames of our passion by government and media disinformation sources.

But it’s nice to know that the world’s most famous terrorist is on the side of climate change.  Maybe Osama could have a little talk with Obama.

Listen to this fat blowhard if you want for another take on this.  But a much more important than all these bobble heads flapping their useless gums is in that last link:

For the record, it simply is impossible to stop global warming by bringing the US economy to a halt.

This is one of the first times I’ve seen someone else agree with me on this point.  In effect, nothing can now stop global warming.  This is a critical point, as it will functionally dictate what can and cannot be done for the next thousand plus years.

Fox News – I’ve not watched Fox News in over ten years, finding this “programming” as disgusting and as full of errors and unbelievably bad reporting as ever.  As for “trust”, gimme a break.  Fox News is one of the worst in terms of accuracy, balance and honesty among the media whores.

I have long been interested in simplifiying my life, reducing dependencies and doing away with the complex requirements of modern living.

Human powered devices fit this desire pretty well.  Because they use no petroleum in their operation (as opposed to the manufacture, which they most certainly do), they can be utilized in applications where no electricity or petroleum fuel required.

If you think about it, most inventions these days require plenty of both — electricity and petroleum.  And for the most part, all inventions require both in their manufacture.  Since petroleum reserves are declining all over the world at an ever accelerating rate, and peak petroleum extraction has already occurred, it makes sense to utilize our remaining reserves towards transition to a non-petroleum based economy.  This in turn means that a non-petroleum infrastructure is required (and already long overdue).

There are many different devices that have been designed to fit within the human powered concepts, including bicycles, blenders, generators, washing machines, ultralight airplanes, hydrofoils, and all kinds of boats (paddle and peddle).  There are as many applications as there are ideas.  This site explores some of the possibilities, and here’s a really cheesy youtube video for Yogen.  We can even capture thermoelectric energy from the human body, something that the dreaded Digital Angel (human microchips) is now doing.

We can easily manufacture all of these things today using refined metals (or recycled scrap) and with the still available energy grid (and even more petroleum).

The future more then suggests that these devices will become extremely valuable commodities for human society.  They are commoditites after all, versus necessities, as humans have long lived without them before.  We could do so again — but clearly do not desire such an existence.

Future technologists would do well to consider human powered devices as having some very long term applications, which would be in demand as long as human are still around.  They would aso do well to consider how to retool our industry and utilize our remaining petroleum resources to help make the transition from fossil fuel to human powered devices.  This is still a fledging industry, one that is poised for explosive growth even during the stages of collapse.

Avondale Condemns Home, Solar Power, Batteries Not Enough – There are a couple of seperate issues on this case, which need to be seperate out.  The alleged theft of services is not meaningful with regards to using solar power. The only real issue here is whether or not you are even ALLOWED to use solar power in this area (Arizona of all places!!).  You do have to buy a “permit”:

Avondale requires residents to pay a $40 fee for a permit allowing them to use alternative sources of energy.

The city however, believes wrongly that it can judge your living standards as being adequate or insufficient.  The very notion that you that you must get official approval for how much electricty you use or generate and where it comes from is absolutely insane. 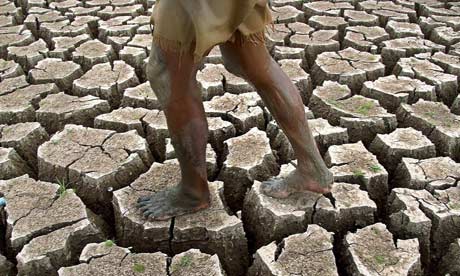 Pentagon Ranks Global Warming “A Destabilizing Force” – Fits in exactly with my own predictions.

Of course they are, many people have been saying this all along.  And because of this deep interconnectedness, it also means that when any of these are threatened, it will be a hugely significant destabilizing factor for human civilization.

It still bothers me that we’re pointing out the dead obvious — and doing far, far too little to mitigate the effects or develop workable strategies. It’s as if we’re comitted to playing catchup, the game where you just never get to really play because you are so busy trying to figure everything out using outdated information and rules.  But the game goes on anyway, playing without you and winds down with nobody left standing.

One of the reason I personally oppose “cap and trade” is that it will do nothing to address the root causes of human emissions.  It benefits the rich immensely, and those that want to be rich, but the environment and the atmosphere are not commodities.  This is yet another version of the game “catchup” whereby we think we understand the rules and the game but don’t, and by the time we figure out where we went wrong, it will be game over.

Vaughn sent me a couple of links worthy of mention:

20 Reasons: Debt Bomb Is Going To Explode – Tick, tick, tick, the clock moves on.  One or all of these points will result in a detonation of everything we hold near and dear.

Federal Payroll Hits 2.1 Million – No reason at all to think that we’re going to scale back. Government will continue to grab whatever it can as it tries to “help” us.