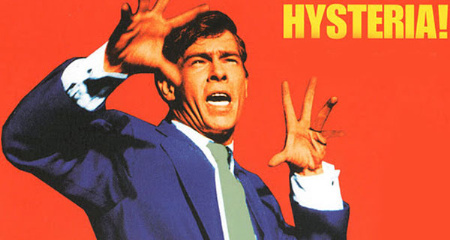 I don’t know how many of you are reading the news links regarding the Mayan hysteria, but it’s building very rapidly.

There are links all over the Web, but I’m not going to encourage any of this now by posting them here.

In addition to this, the gun crowd has gone absolutely ape-shit. So has sellers of rifles, ammunition and magazines.

Price gouging has never ever been this bad before, with some things being charged tripled in their former price.

There is also a lot of “witch hunts” taking place, with proponents attacking anyone who questions the motives or actions of what is going on.

What is really scary about all this is these points:

a) Apocalyptic “doomers” are going to be hugely disappointed in just 48 hours. Their reaction to this disappointment could be very, very bad.

What is happening here is a “desire for the end of the world“. This shows a SERIOUS lack of mental stability and being grounded in reality.

Deranged people by the millions cannot be good for a healthy society.  Or make for a safe society.  Or even offer anything to help us work through any disaster or collapse.  What will they do when nothing happens?

Many will do nothing. Many others will gravitate towards the next big event. Many will suffer extreme bouts of depression and anxiety.

Many will take advantage of this mental handicap.  Some will commit suicide, and others will commit murder. In the end, nothing good will come out of any of this.

This event is seen as a “boom” for the preparedness industry, prophet [sic] seekers, authors and sellers of all kinds of things that are catering to this fear-mongering. The problem with this is it all leads to a gigantic anti-climax. Frustration, anger, disappointment and blame will be found in waves very soon.  Somehow, our society will “survive” all this, but we’re definitely not going to be better off.

In truth, none of the hysteria should have ever happened. It did because it was encouraged by many who thought they could profit.

b) New gun owners who waited this long to “buy” a firearm show a SERIOUS lack of judgement. Now a bunch of them are heavily armed (they’re buying so-called “assault weapons”).  What do you suppose this might mean for the future?

Do they suddenly (now) believe that they are going to become citizen soldiers? If this is true, or even remotely true, we’ve got a huge problem. Untrained civilians do not make an army, or even a citizens militia. They lack experience, education, practice and judgement.

Nobody every talks about why you cannot actually use an assault rifle.  It’s a one way street if you do, all downhill.  One of the reasons Americans have not actually responded (with violence) to their losses of freedom is because such actions are an “all or nothing” enterprise.  You’re either “all in” or don’t do anything.  Once you start, it’s “over” for you — everything you’ve ever known, ever wanted is over, for life.  This knowledge has helped many not do anything, because they do understand the ramifications of using violence.

But now we have many newcomers who may not have thought any of these things through, who are reacting to the incessant fear-mongering and the hysteria building.  This is stupid and is leading to a lot of reactionary response.

Anger, frustration and lack of education, training and awareness may cause even just one of these individuals to react.  Like the recent school shooting, just one bad reaction by an inexperienced, uninformed individual could lead to a VERY bad reaction for every other American, whether you own a gun or not.  We cannot afford such a reaction.

The answer to this is to remain calm.  This is not the time to use poor judgement.  If anyone does, this country is headed to the shitter and fast.

c) Price gouging right now is extreme, I saw ads of ammunition tripling in price by some major online sellers. This is shameful, but widespread. These companies are trying to take advantage of the fear that is being self-generated.

The answer to this is to simply withdraw all future support from these outfits.  Don’t shop there again. Unprincipled business are found everywhere, taking advantage and encouraging fear. This is only getting worse as things become more desperate and more grim. I don’t think any of this is necessary, but it definitely shows the character and integrity of those who engage in this.

d) Reasoned (informed) debate is far better then reactionary attacks. The polarization of Americans is often internally generated. We’ve got enough propaganda coming from the government and media, but there is also a great deal of this coming internally from vocal Americans.

It’s not that hard to identify propaganda and misinformation. Straw arguments, vindictives, ad hominen attacks and conjecture are signs by which you can identify this type of activity.  Red herrings arguments are also used.

The problem with this is obvious. Americans need to be well-informed, and must actually rely upon each other to do so. But it is very easy to invoke an “appeal to authority” as defacto “evidence” or “support” for a position, which then goes viral on the Internet.  Common sense and logic dictate that such attempts be avoided, educating nobody and only parroting what someone claims.

One of the reasons I am NOT concerned about the so-called “gun grab” that is being constantly preached is IF it happens, it would have almost NO effect on my own life.  I’d never “obey” in the first place. Nor would it change how I live.  Nor would it mean that I’d suddenly turn “violent”, reacting against the “gun grabbers”.  This is what many have expressed, that they’d have to “pry my guns from my cold dead fingers“.  Oh really?  This is stupid bravado.  This sort of comment usually comes from the same people who routinely fill out the 4473 form to buy a gun.  They already lack the moral courage to resist in the first place.

The truth is — most of America already lacks the moral courage to live by principles, offering NO resistance and TOTAL obedience to anything the “government” demands of them. This is perhaps what is really at the heart of the sudden “gun frenzy” — people who never had the convictions before have suddenly fallen for not the moral rightness of gun ownership and self-defense, but the fear and propaganda that now surrounds the “coming gun grab“.

You do not “suddenly” become morally courageous, it’s a process that takes a long time. If you don’t have it already, you CAN start today if you want. But don’t start by succumbing to the fear being promoted.

I often, deliberately avoid any discussion or debate among gun owners because they do not fully understand what they are expressing.  They are not prepared to do what they claim. They definitely do not want to be reminded of this.  They’re very comfortable owning guns, but most lack skill, experience, training, education and knowledge of how and when they should be used.  For too many, the simple “ownership” of guns is “enough”, falsely believing that this “guarantees” them their notions of freedom.  These same individuals are happy to obey every freedom-infringing law and decree demanded of them. The evidence is there  to see — just go look at what they do.

This sort of individual is not going to “set America free” (ever) from the gun grabbers or “tyrannical government” or alleged Chinese invasion. They lack everything that it would take other then guns.  The point being — it is not the gun that makes you free — and never, ever was.  It is the man who is free in his heart and his head, and who lives by this code that is free (as he is going to get).  The gun is only a tool, nothing more, nothing less, no different then a screwdriver, serving a particular purpose, including hunting, self-defense, shooting sports and when necessary, for freedom.

Americans in truth are deathly afraid of true freedom — which is being entirely self-responsible.  They much prefer their gilded cages and like being told what to do. They do not want complete and total self-responsibility, deeming this much too hard and too painful to bear. They’re very comfortable within their individual prisons.  IF THIS WERE NOT TRUE — THERE WOULD HAVE ALREADY LONG AGO BEEN A REVOLUTION IN THIS COUNTRY.

But you see, it is VERY true.  Americans have always been “well-armed”.  It is not firearms that American have (ever) lacked.  It is moral conviction and courage to live principled lives.  It’s just too damned easy to compromise.

I am not advocating revolution. I am simply pointing out that (more) armed Americans do not make a revolution. Revolutions need not be fought with firearms anyway.  This is another one of those myths that won’t die.  All you people need to do (every single one of you) is stop complying.

The hysteria that is building could explode. I have no idea. I hope it doesn’t, because it is mindless, random and without common support, and will lead to nowhere.  If you look, many are calling for conflict — but they have absolutely NO IDEA what they are doing. These people are dangerous fools. Avoid them.

I suggest everyone who is being swept up by all this hysteria CALM DOWN.  Reactionary decisions and actions made in fear lack sound judgement.  America is most definitely NOT yet at a cross-road where it must now choose to engage in violence or further submit to government demands.  If anyone does so, they will be reacting with ignorance and poor judgement and many people will be unnecessarily hurt.

I’m staying home for the “Apocalypse”.  And Christmas.  And New Years.  And at every opportunity I can get.  I’ve no interest whatsoever in fostering the fear-mongering that is going on.  The reality of what IS happening in our world is sufficient all by itself to keep me focused on what I can do to help feed my family and prepare for a diminishing world.

If the world goes crazy, I don’t intend to be a part of it. I’m staying right here, protecting my family, which is exactly where EACH of us belongs.