‘You get the point. Obama is not in charge. Romney would not be in charge. Politicians are the public face of corporate power. They are corporate employees. Their personal narratives, their promises, their rhetoric and their idiosyncrasies are meaningless.”

How Do You Take Your Poison?

It’s refreshing in a morbid sort of way, to know that others realize just utterly ineffective it is to “vote” for the “lesser evil” in the next (s)Election.  It’s poison, no matter how you slice it, dice it or justify it, it’s going to hurt and none of us are going to like it.

There is now as much dirt swirling around Romney as there is Obama, so those of you who are “hoping for real change” can kiss your votes goodbye.  Change isn’t something corporate America believes in, unless maximizing even more profits is the “change” you want.

It’d be really great to see a ZERO turnout for this (s)Election, probably the loudest, most peaceful “voice” this fucked up country could ever possibly hear.

Once in a while, somebody will take the time to tell me that I shouldn’t be so critical of America.  I’m a bit puzzled by this position others have.  America is not the greatest country in the world.  It happens to be the place I live.  But it also happens to be the most war-mongering nation on Earth, and one of the most destructive towards the environment. 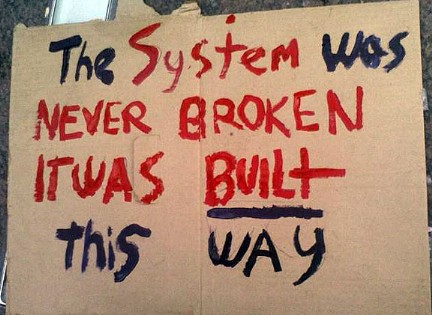 Refusing to admit just how broken it is doesn’t help.  Honesty is always the best policy.  The Presidential “race” is a total sham, offering nothing whatsoever to the American people but illusion and disappointment. I am not going to vote.

I stopped voting when I came to realize just how corrupt the entire process is.  It’s worse now then it was then.

Rather, I object to the entire fraud being perpetrated on Americans as being ethical, fair, representative or honest.  Providing my “vote” to this process only lends credibility to its continued existence, which I will not do.

But everyone should “vote” their conscience.  I’ve already “voted” mine.

Some will say that this denies people like me, “non-voters” the “right to complain”.  On the contrary, it emphasizes our rights to complain, underscoring our protest. Instead of “going along” with what we well know to be a complete fraud, we refuse to participate in the entire game being foisted upon the people, literally “walking off the field” in protest.  But it is STILL OUR FIELD and quite frankly, we object to the corruption being played out upon it.

Those that stay and “play along” allege that “they are making a difference”, to which I reply, “No you are not.  You are not making any difference at all.”

In fact, participation has only resulted in perpetuating the status-quo.

If you always do what you’ve always done — then WHY would you EXPECT ANYTHING DIFFERENT?

Participation will not result in any change at all.  Participation will ONLY result is more of the same — and if that “satisfies you”, stop reading this blog, because we are miles and miles apart on philosophy and common sense.

It’s always the same — no matter who “wins” or who “voted” or who didn’t vote, or how many protest or object.  It’s ALWAYS THE SAME OUTCOME.

Since voting doesn’t actually work in national elections, then non-voting is just as effective.

The only “difference” is how you perceive your participation in the whole thing.

It makes no difference what someone else “thinks” about your decision, their opinion is just as irrelevant as their “vote”.

The only opinion then that does matter is your own.  What you “did” or “did not do” to participate / perpetuate this complete fraud.

You decide what is “best for you”, because in the end, that is all that actually matters.

As for the outcome, it’s already a foregone conclusion.  It’s poison, dressed up like a decked out whore, in gaudy colors and phony gay celebrations — it’s ALL FAKE, worn-out and well-used, infested with the same disease and disgust and disappointment as ever.

4 thoughts on “How Do You Take Your Poison?”