The greenhouse arrives in a bunch of big boxes on long pallets. It was pretty tricky to get this safely unloaded from the truck. It weighs several thousand pounds (about 4k).

It was a bit overwhelming at first, but after getting boxes opened up it started to make sense.

Now where are the instructions? 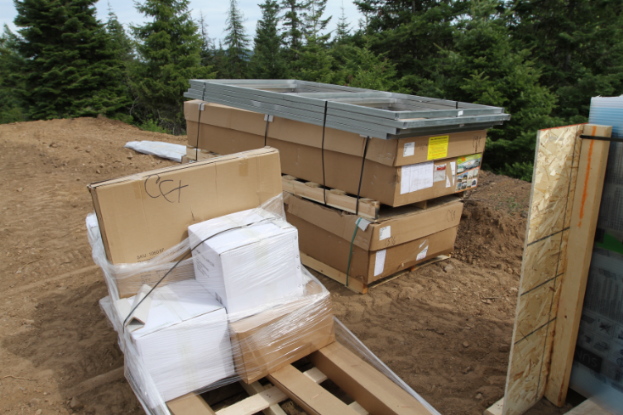 Well, there aren’t any real instructions, just some basic assembly information.  Nothing in the boxes on how to actually erect the frame.  The “instructions” consisted of “erect the frame first”.  Hmmm. Guess I will figure this out myself. 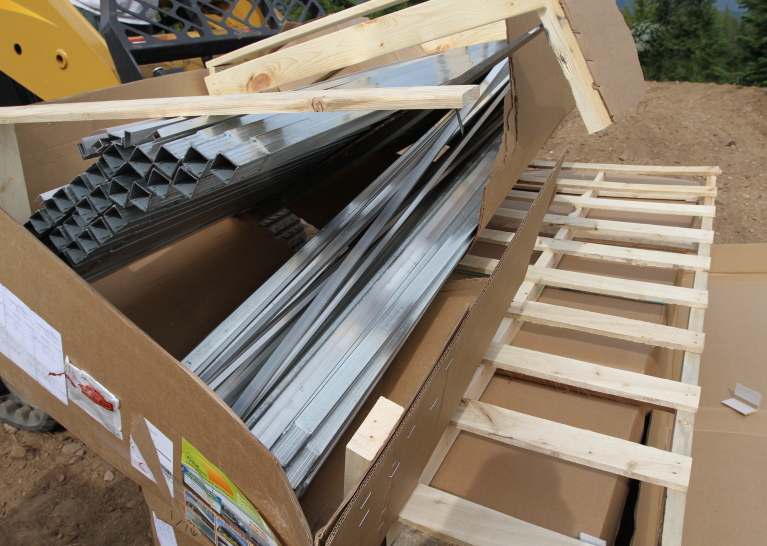 One of the boxes broke apart, dumping a bunch of pieces out. My fault, didn’t have as much of a bite with the forks as I thought. Fortunately, nothing seemed to be damaged. 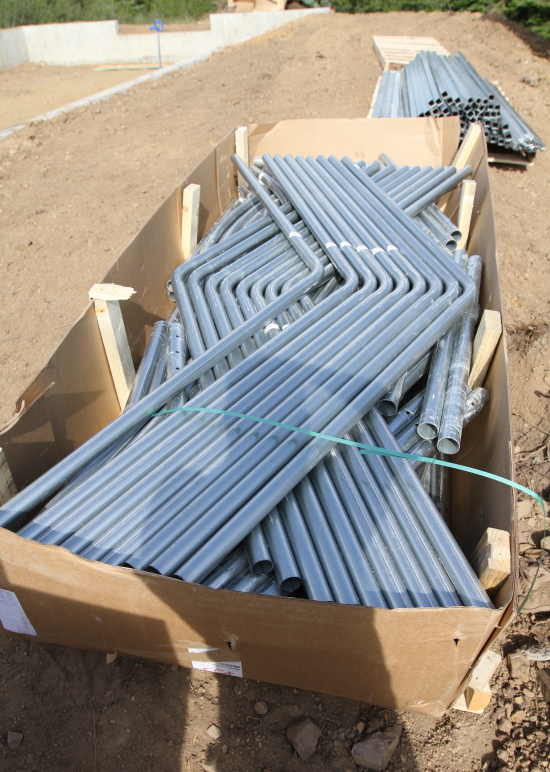 Spread things out so you can sort through the boxes as you scratch your head, trying to figure it all out. There are hundreds and hundreds of major parts, and several thousand small parts.  You can see all the grade work and backfill I had done to bring the dirt up to the height of the foundation walls. 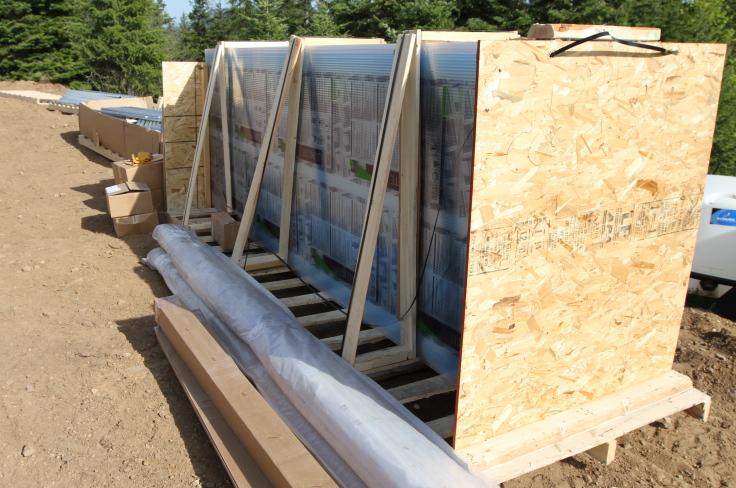 8mm polycarbonate panels, should hold the snow loads here pretty good.  I’ve seen 14 ft. here over the winter, with the heaviest in 24 hours about 36″, but nothing will really support that kind of weight without shoveling it off.  So….

I”ve doubled the number of trusses that will be installed, on 2 ft. centers.  This will make the greenhouse immensely stronger.  Trusses spaced 4 ft. apart is the norm.  Those things are the “feet” that have to be mounted to the concrete wall. 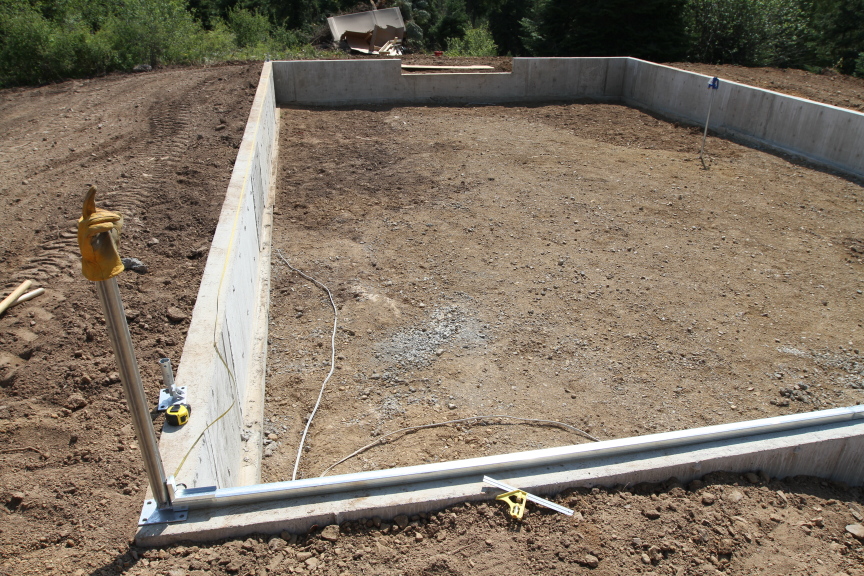 Just a dry fit, to see how it might all go together.  Somebody put that glove in the picture. 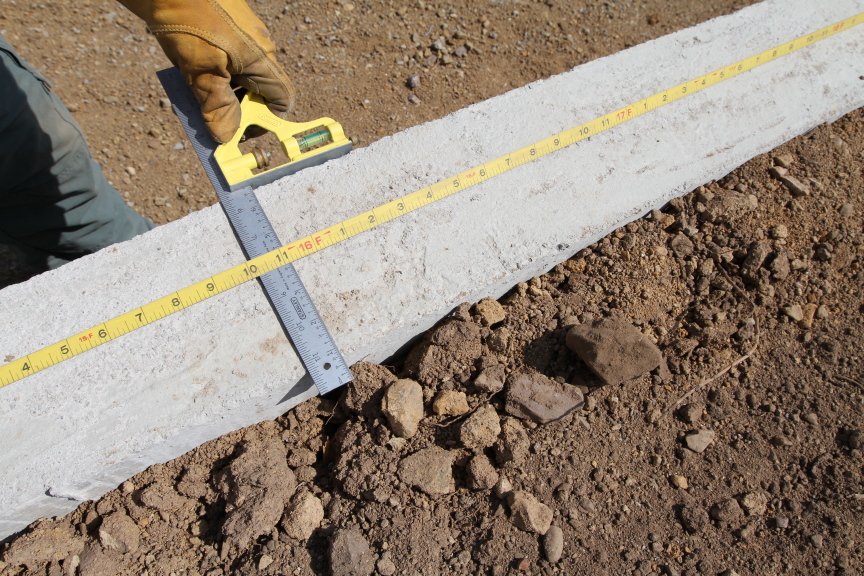 Laying out the measurements for the placement of the mounting feet. Each foot is 4″ wide, so the center of the pipe is 2″ from either edge.  Offset the foot placement marks by exactly half (2″) to identify where to position each foot when they’re installed. 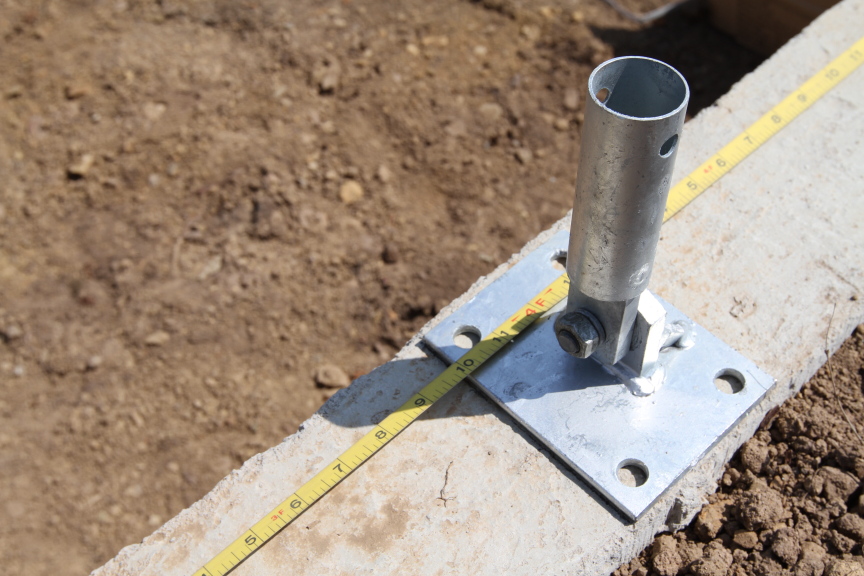 Checking the centering of the mounting feet, so far, so good.

Have someone hold the tape on the first foot, on the outside of the pipe.  This is where the polycarbonate will be.  Measure exactly 2′ (or 4′ if you trusses are 4 ft centers) and make your mark on the concrete (minus 2″ because of the width of the mounting foot).

The rest of the mounting feet down each side wall, will be exactly 2′ or 4′ from its neighbors.  Don’t forget to start the other sidewall with this first measurement adjustment. 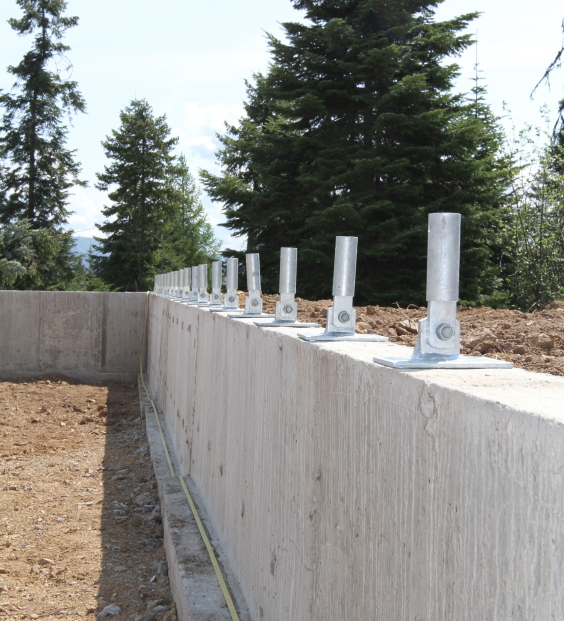 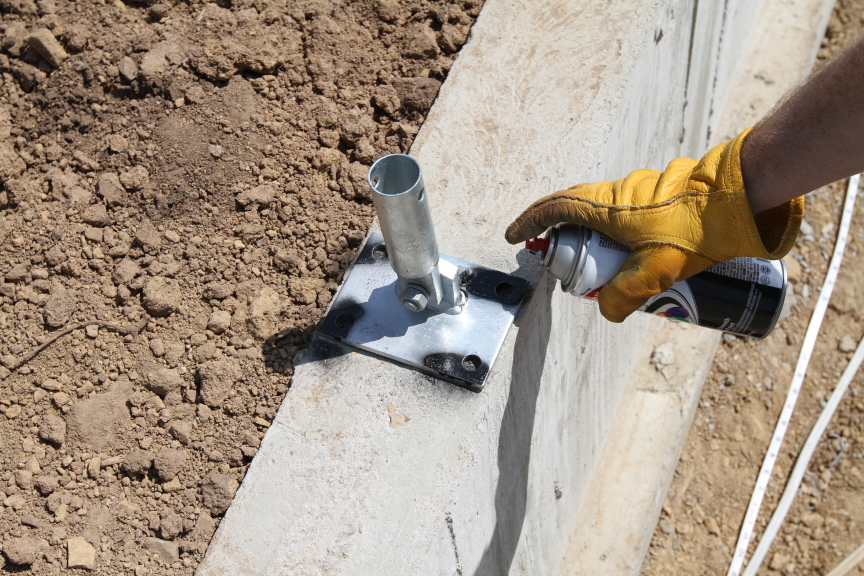 Tried to use black paint to identify the drill holes, but you’ll see in a moment why this didn’t actually work as expected. 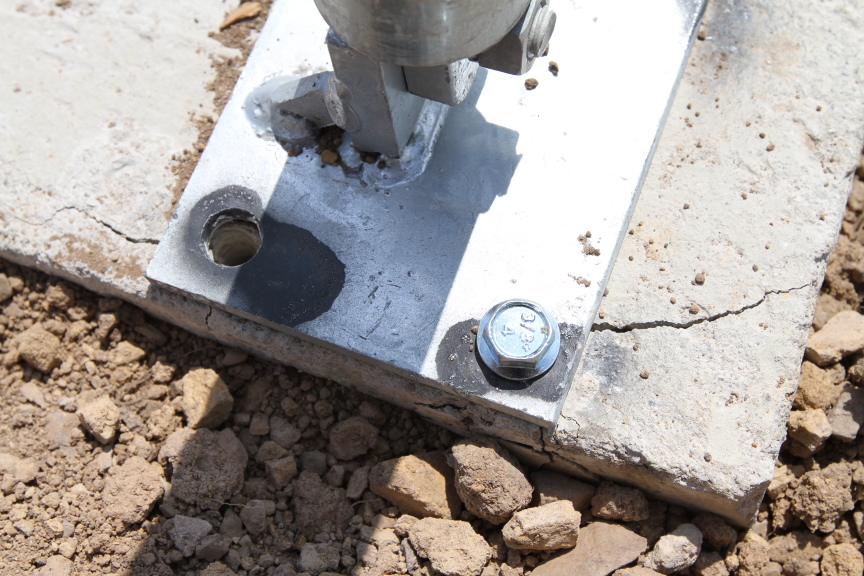 Here’s what happened on the first foot install.  The concrete is 6″ thick, with reinforcing rebar.  This should be sufficient for an house to be built on top of.  But these type of bolts are drilled slightly undersized (takes a special concrete wedge bit) and will put side pressure on the holes.  The holes on the mounting feet are too close the edge of the concrete and both of them broke out.  8″ of concrete would have probably been ok, but at a higher cost. 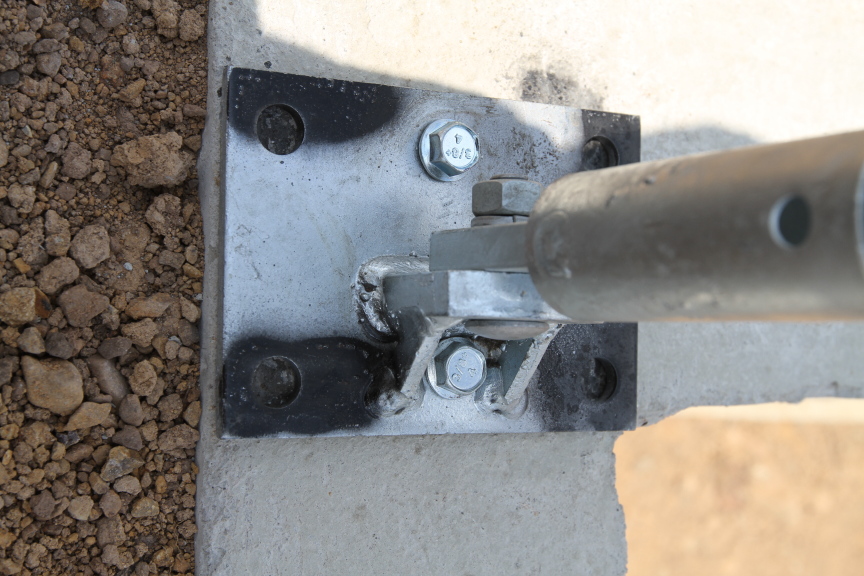 Drilled out one of the mounting feet, and reinstalled.  No cracks! 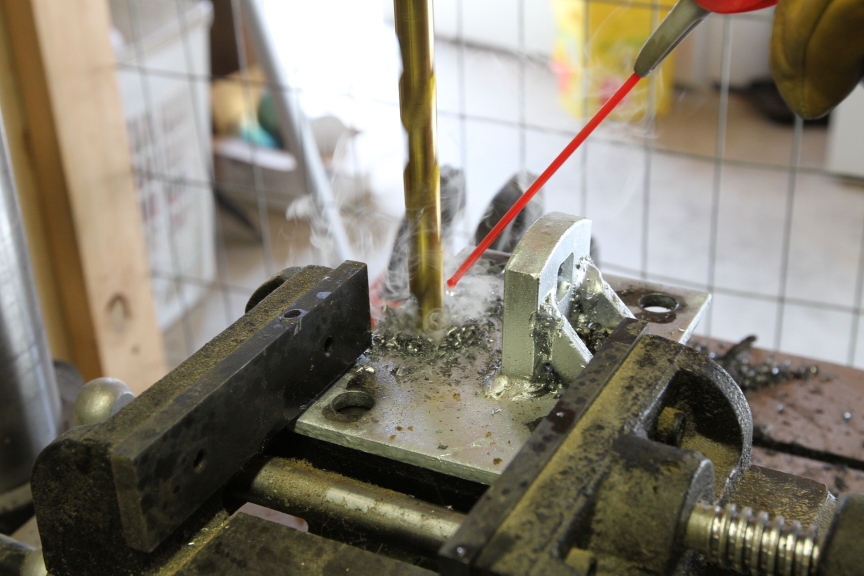 So now a production run of all the feet.  Setup the drill press with the sharpest bit I had, and ran them all through. Only oil I had handy was a couple cans of WD-40, so I used plenty to cool the bit. 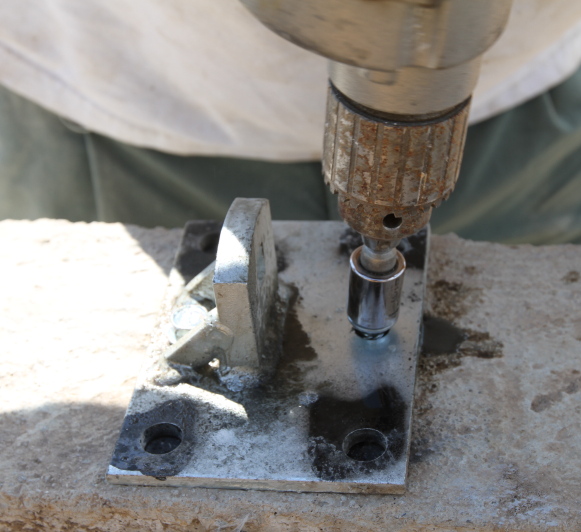 Still no crack, so this seems to be working.  I can always come back before the polycarbonate is installed and drill in a third hole if I want.  Each mounting bolt is 4″ long and has a strength of 1480 lbs each. 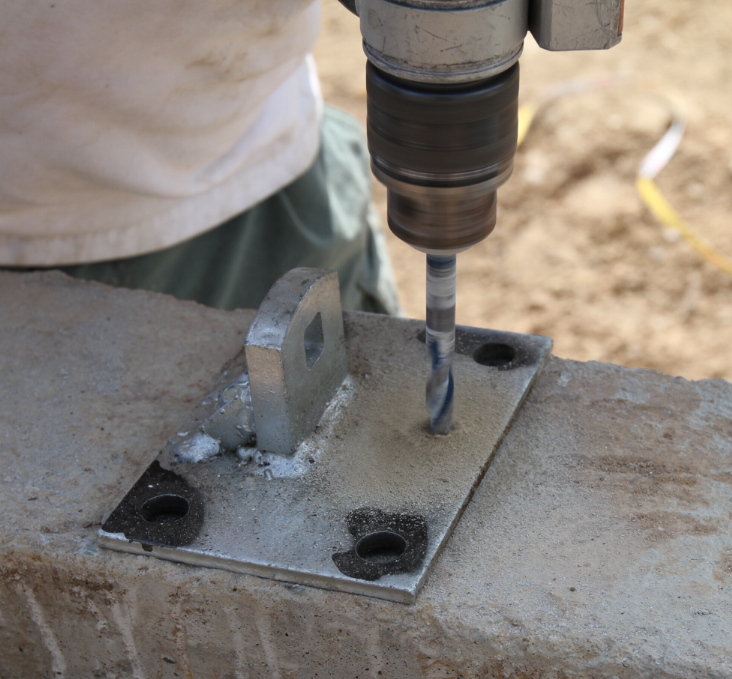 So now it’s time to drill them all out into the concrete.  This was a big job, taking about five hours over two days. It takes a fair bit of pressure on the drill and I was tired. Two bits were used, although I think one could have done the job, but a sharper bit was much appreciated with sore back and shoulder.

You can drill too big a hole, causing the concrete bolt not to tighten up properly. This did happen on two of my holes drilled. The solution was to simply drill a new mounting hole in the foot, and redrill the concrete, taking care to drill a straight hole.

Don’t try to install the mounting fee sideways (turn them), something we had considered instead of drilling them all out, this won’t work.  You have to be able to swing the truss in and out during the assembly (see pics below).

Only two bolt holes were drilled (instead of 3 or 4) in the mounting feet, thus cutting my assembly / drilling time dramatically. It should be enough, but it is really just a guess.

Done! The WD-40 was used liberally to lube the concrete holes.  First, blow out all the concrete dust and chips. Makes sure when you’re drilling that you don’t load up the drill too much, it took about four “cleanouts”  (remove the drill, blow things out) before each hole was fully drilled.  Then, when installing, I sprayed WD-40 on the sides of the drill hole and on the concrete bolt.  A 1/2″ high-torque drill was used to install the bolts (not shown, the drill shown is much smaller).  Don’t overtighten the bolts with the big drill, you can literally break your hand or your arm with a drill this size. It’s best to do the last tighten  by hand with a breaker bar. 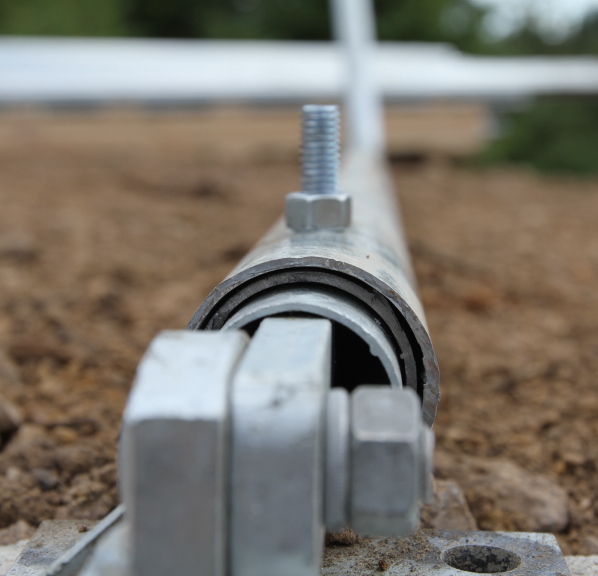 Figuring out how to assemble the truss legs took several tries. The absent instructions would have been really appreciated here.

I’d not ever seen this done before.  Our first attempts didn’t look right, nor did it seem right, there was a lot of slop in the truss leg when it was assembled.  Studying the problem and we realized that the truss leg fit nicely over the mounting feet as shown. When properly assembled, they look like the picture above. 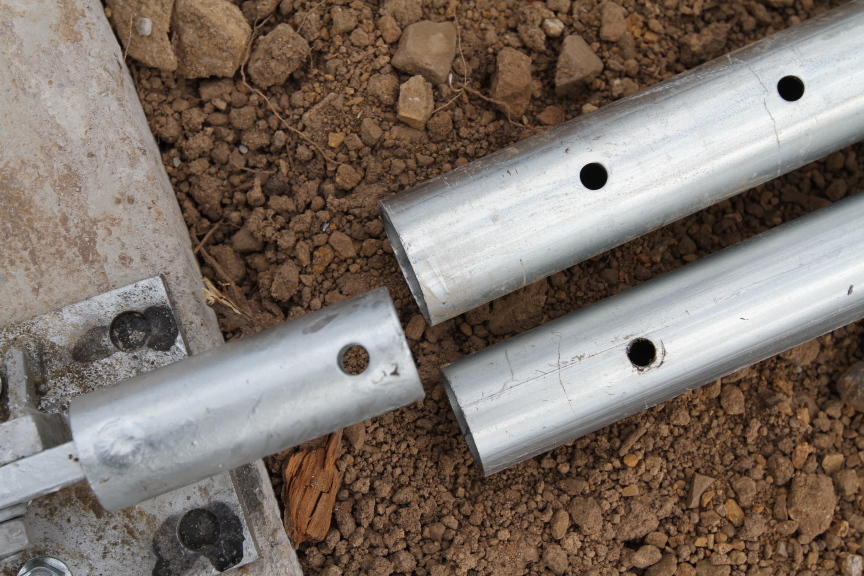 This shows the mounting foot horizontal, the smaller truss leg, and the “ground post” with the double drill holes. 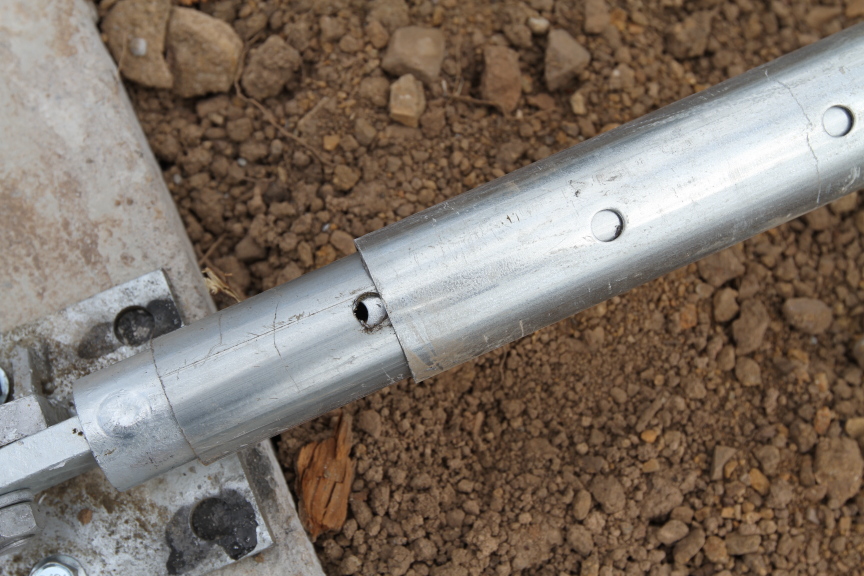 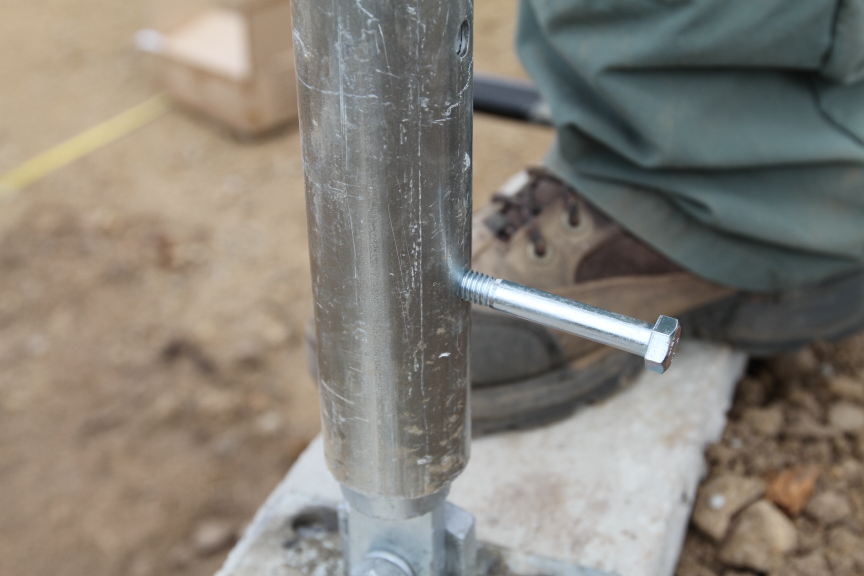 We tried doing the vertically, but each truss leg, ground post assembly weighs about 30 lbs I’d guess, and getting everything to line up on the holes was awkward.  Time for Plan B: 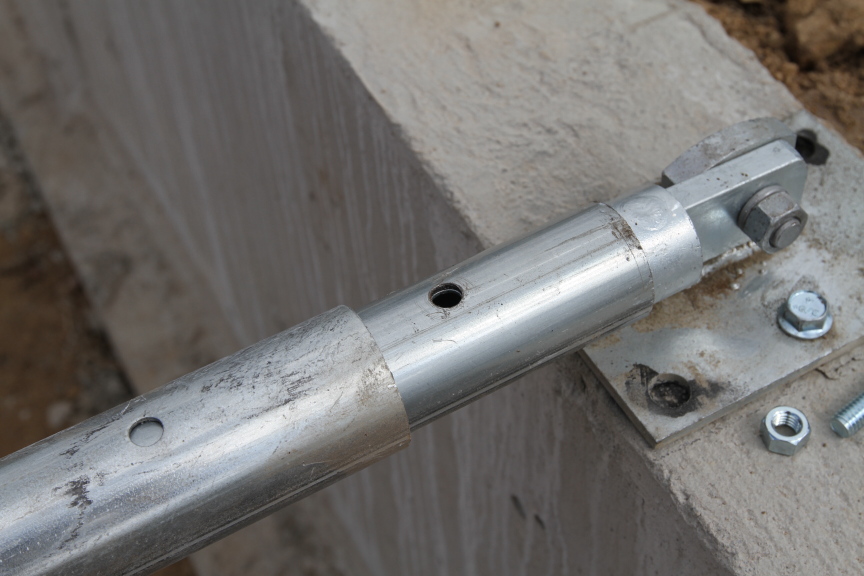 Lay everything out horizontally.  Having a pit set greenhouse design made this step relatively easy, but you could to this on level ground too. Slide the ground post onto the truss leg, then slide the truss leg onto the mounting foot pipe, then line up the holes. 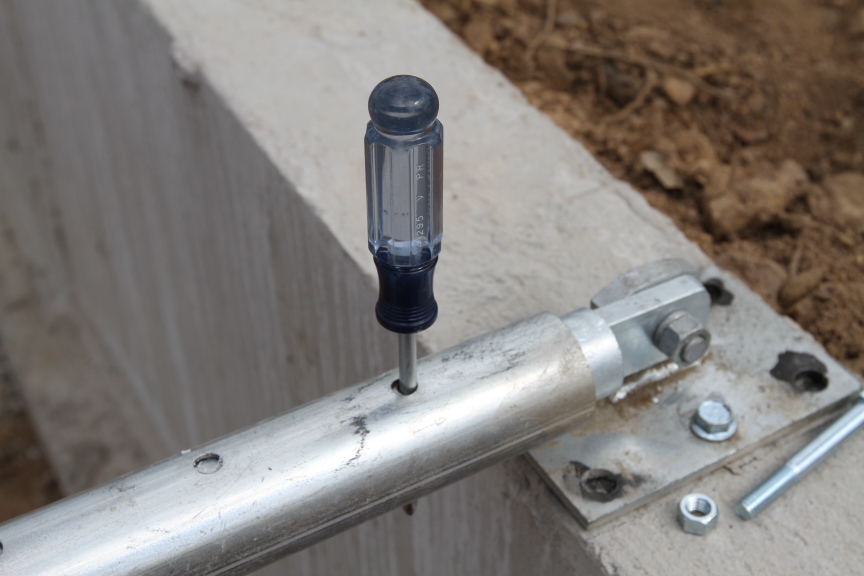 Craftsman gets used for a lot of things.  Sometimes I even screw something with it. 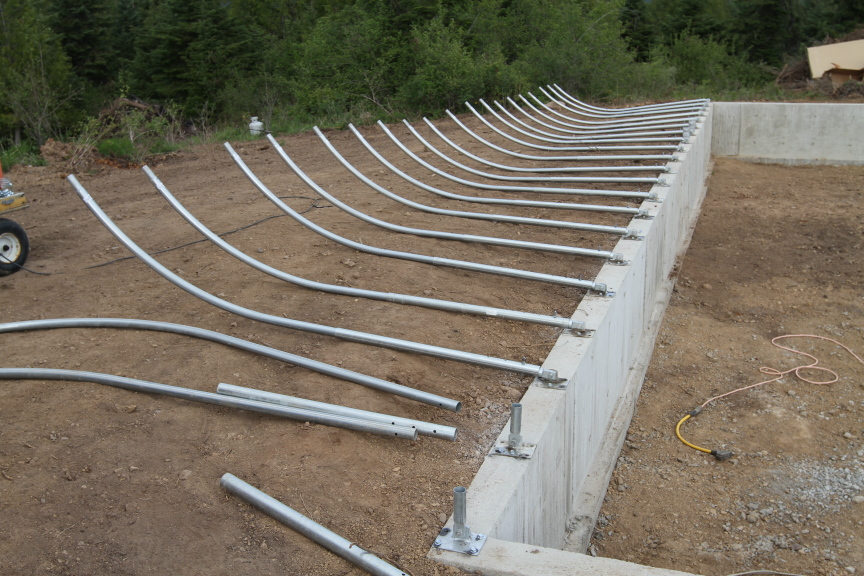 Stopped for the day. Broke two of the cross bolts used to hold the legs to the mounting feet.  Of course, there aren’t any spare parts so I can’t finish the job. 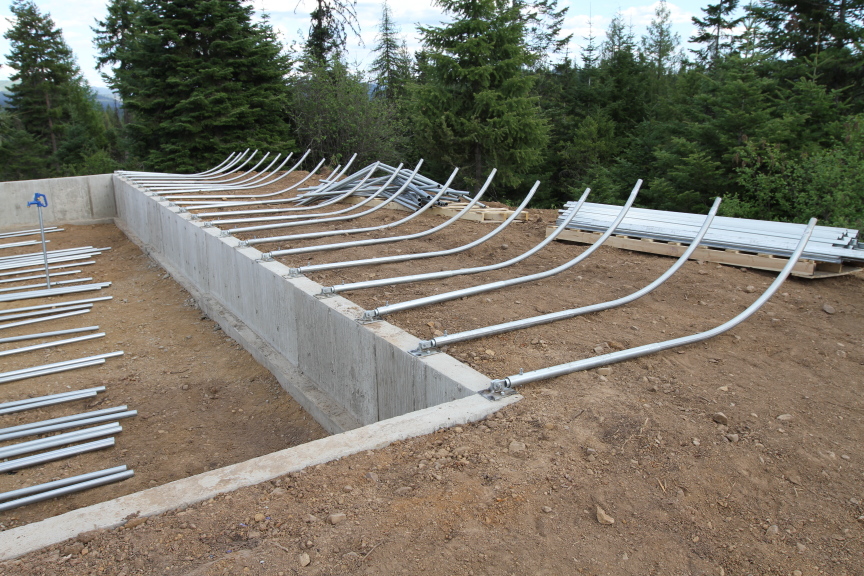 Legs all attached to the mounting feet and swung up out of the way.   They’ll be swung up vertically of course as the rest of the truss is fitted together. 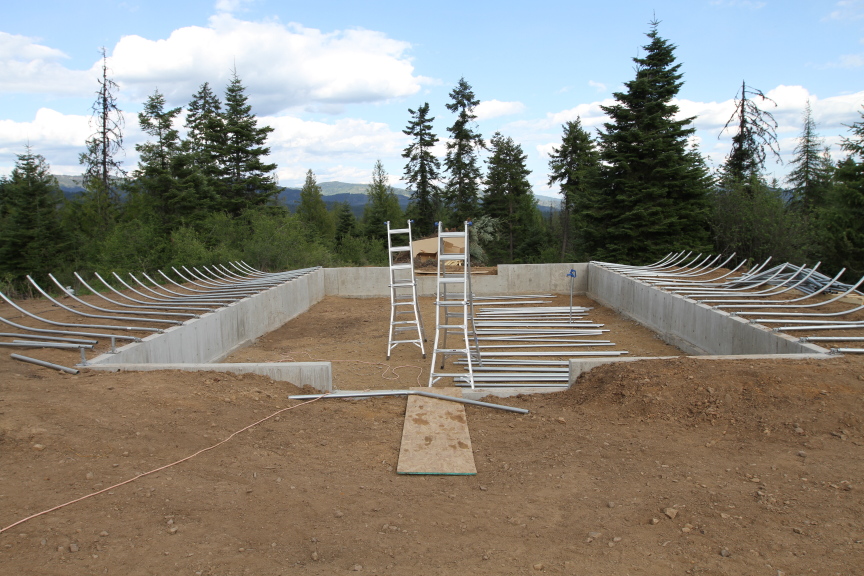 Starting to resemble a medieval torture device for the King’s enemies here (although I doubt they’d all fit in this space).  We’re ready to attach the remaining truss pieces (pictured laying inside the foundation) and “raise the roof” assembly. That peak pipe is anxiously awaiting it’s elevated position at the head of the greenhouse.

A good shot of the earth work done too, the sliding doorway will be mounted on the inside of the foundation. This is also a “guess” on the design, but should work. The gable ends are custom fit anyway (everything has to be cut), so we’ll essentially build the ends to accommodate the doors, fans, vents and so forth.

There are 42 mounting feet (21 per side), 84 concrete holes, 84 concrete bolts, 21 complete trusses, four tired hands, two blisters, no injuries (a first for a project of this size), and a few thousand screws, bolts, pipes and panels to go still.

This is really a two-person project, it’s doubtful you could do many of the necessary steps alone.  Simply having the extra set of hands and the “gopher” something when you needed it was nice. I also got to hold the camera!

Today I finished up some of the external wiring, the two remaining truss legs and put all the peak pieces into the pit for assembly this week.  I didn’t get much else done, but next week is where we’ll find out if it all comes together properly or not.