Much has been written in the denialsphere about the so-called “warming pause” that I’ve not bothered to cover here, simply because it’s all bullshit.

Real Climate has a new article out, “Global Warming Since 1997 Underestimated by Half”, on satellite and land-based measurements that goes beyond the widely used HadCRUT4 data set.

This is what they found: 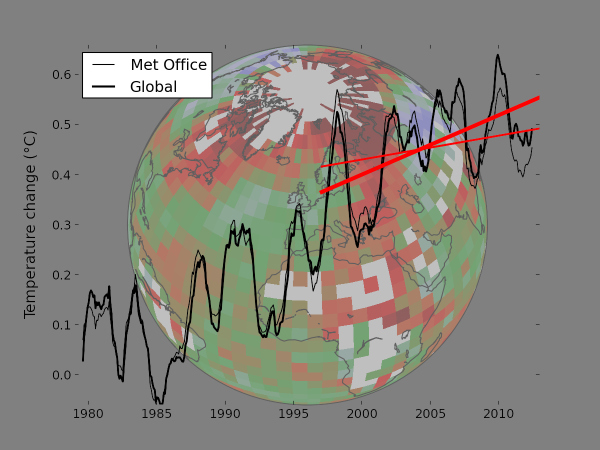 The deep ocean has also continued to absorb excess heat, but that’s not expected to continue much longer. It will show up “here” (where we live) – and soon.

Increased ocean temperatures over 80 degrees were greatly responsible for the “Super Storm” that just destroyed the Philippines.

If you look carefully and pay attention to the published literature, you will find many reports of temperatures far in excess of the alleged .85 °C increase that we’re supposedly at right now.

There are now dozens of major places that have consistently reported higher temperatures than .85 °C increase.

This means we are far, far closer to the catastrophic “tipping point of 2°C” than we’re being told.  I’ve already well-documented the 2°C figure is a false “safety limit” – chosen as politically expedient and nothing more.

Anyway, I thought that this was interesting. No cooling shown. Nothing but faster warming and more “updated figures” to that previous estimates were WAY off.

And there is this: Methane Levels going through the Roof

I told you so. Repeatedly. The “time” that everyone has assumed to be “theirs” simply “isn’t”.