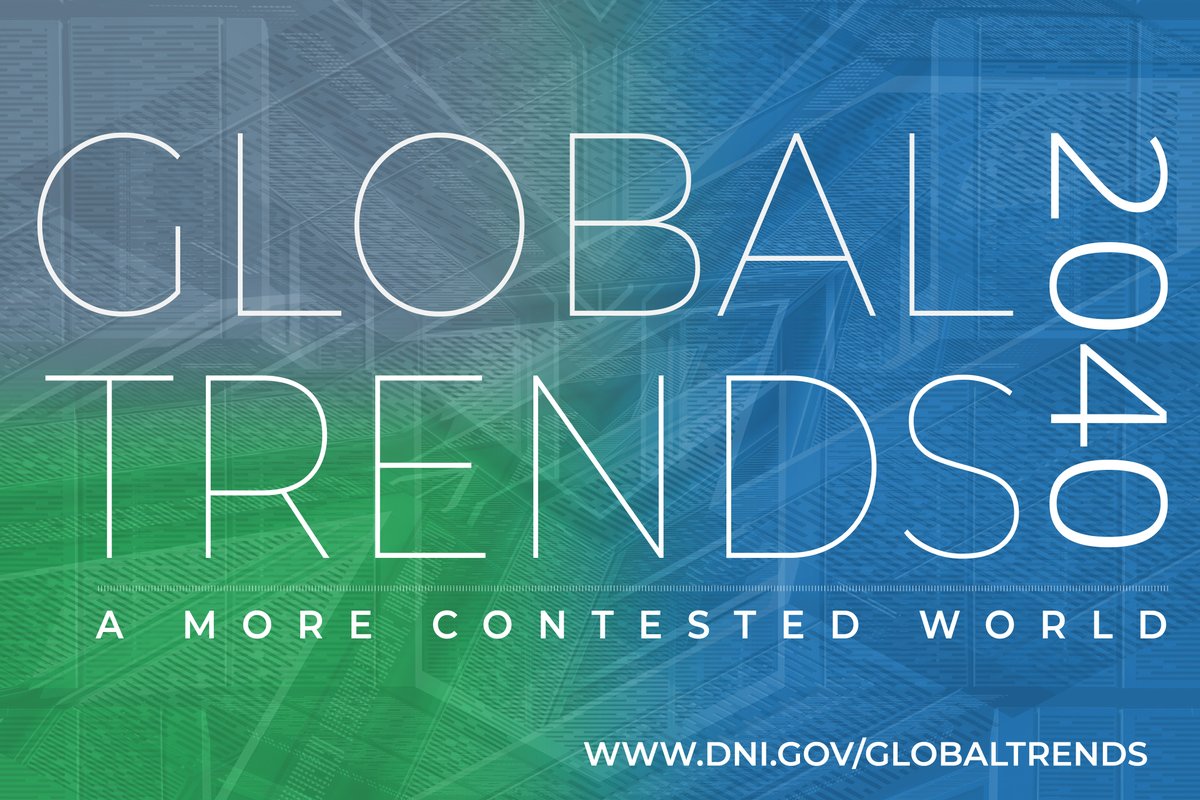 An interesting report on the possible future for humanity: Global Trends 2040

I read the report. It’s just more of the same, only worse. Anyone who is well read will have realized this. And in some ways, this is just a type of propaganda (hopium disguised as cautious optimism).

Maddeningly vague and glossing over critical areas that should have been seriously considered, while regurgitating what is already well-known. Overall, the report is not very informative.

I disagree with the many of the assumptions being made. The threats from climate change, rising sea levels, wet-bulb temperatures and over a billion displaced in the global population should have received much more detail and attention. There was no mention of the rising death rates as a result, which will be enormous.

What really irks me is how they write that business will go on – through adaption, technology, etc., never even realizing that this is what is causing many of the collapsing dominoes within civilization. They do recognize the ‘downturn’ (which is inevitable on a finite planet), but do not connect the causes correctly.

They didn’t cover what ‘adaption’ means in a declining, hotter, stormier, less abundant world, which makes their overuse of this word useless (and wrong).

Technology will not ‘mitigate climate change’ as proposed, more likely it will continue to perpetuate climate change (as it does now). Nor will ‘net-zero’ have any meaning by 2040, finally having been recognized as a load of crap (propaganda) and having zero effect on habitable temperatures, which by 2040 will be in the past.

The notion that development (more civilization) will finally achieve net-zero or climate ‘mitigation’ is utterly absurd, when civilization is the root cause of climate change. The report promotes more of this insanity, and more consumption (growth) while dishonestly claiming the technology and mitigation are magic bullet solutions (already disproven).

Environmental degradation will be so severe by 2040 that hundreds of millions will have already starved to death. Oceans will be even more acidic with almost no fish available. Rising sea levels, dead and bleached coral, the slow down of the Meridional current and enormous loss of ice in the Arctic, Antarctic and Himalayas will quite literally be the death knell of millions as crops and harvests and fisheries fail. Fires and loss of homes and habitats will be utterly enormous, straining every possible resource to the breaking point. We will have long since blown right past the hopium claims of 2°C.

The Tragedy and Mobilization is the closest I can come to agreement (in title only) because richer countries surely are not going to shift to help poorer ones, and the ‘low carbon economy’ is total bullshit (won’t happen). Rich countries are far more likely to keep doing what they’ve always done – exploit the poor, pollute the most, ignore the suffering (and kill those that don’t go along with it).

This report is useless to me, unrealistic, inaccurate and too vague. Probably written by ‘committee’ and probably designed to appeal to ‘investors’ (rapists), and therefore useless (to me) and anyone who really wants to get a handle on what the future may have in store. By 2040, the world will have suffered enormous conflicts and staggering death rates.

If you want to ‘know’ what the world of tomorrow will be like – just look at the past and know that it will be even worse. The utopian claims and visionary remarks aside, reality has a way of repeating itself. Competition for dwindling resources will be extreme, along with all the conflict that will ensue.

There are some good takeaways from this report – if you are one of the billions that have not been following what is unfolding. Conflict, war (even nuclear war), competition, suffering, aging, and declining resources and a collapsing environment are all “in there”, with words written around these specific topics to not alarm you too much. If you realize this – kudos to you, but most people probably won’t catch on, still stupidly putting their trust into State actors and their empty promises.

Saying this again – you are on your own and you definitely need to take this advice to heart. I’m not advocating a lone wolf mentality, but I am stating that don’t expect the State to always bail you out, especially when they have hundreds of millions of other people facing the same type of crisis. The State serves to protect itself first, and the business relationships (power) that serve its interests. People are secondary to this Leviathan. People (zeks) can always be replaced (in case you haven’t noticed). The State serves economic interests before human or environmental interests.

While the world pains for a ‘return to normal’ it’s already clear that this isn’t actually going to happen, ever. We’ve all entered into new arrangements now about life itself, but you should have been expecting this all along. Surveillance, passports, vaccines, monitoring, restrictions, acceptance, intolerance, hate, racism, division, conflict, violence, extremism, shortages, price hikes and unavailability is the new normal. If you read between the lines (on everything), including this report, you’ll have realized this.

We’re not going back, the new future will be more of the same, only worse.