There’s been a very strange development in the Baton Rouge shooting case. The shooter, Gavin Long of Kansas City, Missouri has been reported (by CNN) as being a member of the alleged “support group” Freedom from Covert Harassment and Surveillance (FFCHS).

The FFCHS has a website — which is pretty twisted. It only takes a moment of reading for an astute mind to uncover the fraud behind this organization as a false front — a type of “honey trap” for the unsuspecting and unlearned in the ways of government surveillance and spying upon private citizens and their willingness to use psychological terror.

Allegedly, remote brain experimentation, remote neural monitoring and even remote sexual exploitation of men, woman and children “for pleasure” is being performed on a large percentage of the human population. The “documentation” of these claims on this site is extremely bad, using quotations out of context and even making up many of their claims. Yet it appears to be a well funded effort, which is of course, quite curious by itself. Obviously, somebody is behind this.

Victims are “encouraged” to report their experiences through the website. Allegedly, at least 6.8 million “victims” are claimed to be reported. However, many, many very strange and obvious oddities jump right out. I wasn’t aware of this site before — or it’s revealing as a false front for law enforcement, but it does have some history worth reading about. The FFCHS is a mind-control front to ensnare “gang stalking victims” which is an inaccurate term that has been adopted for covert surveillance and harassment of civilians. The moniker gang stalking has stuck and henceforth, the term will mean illegal counterintelligence operations on civilians. 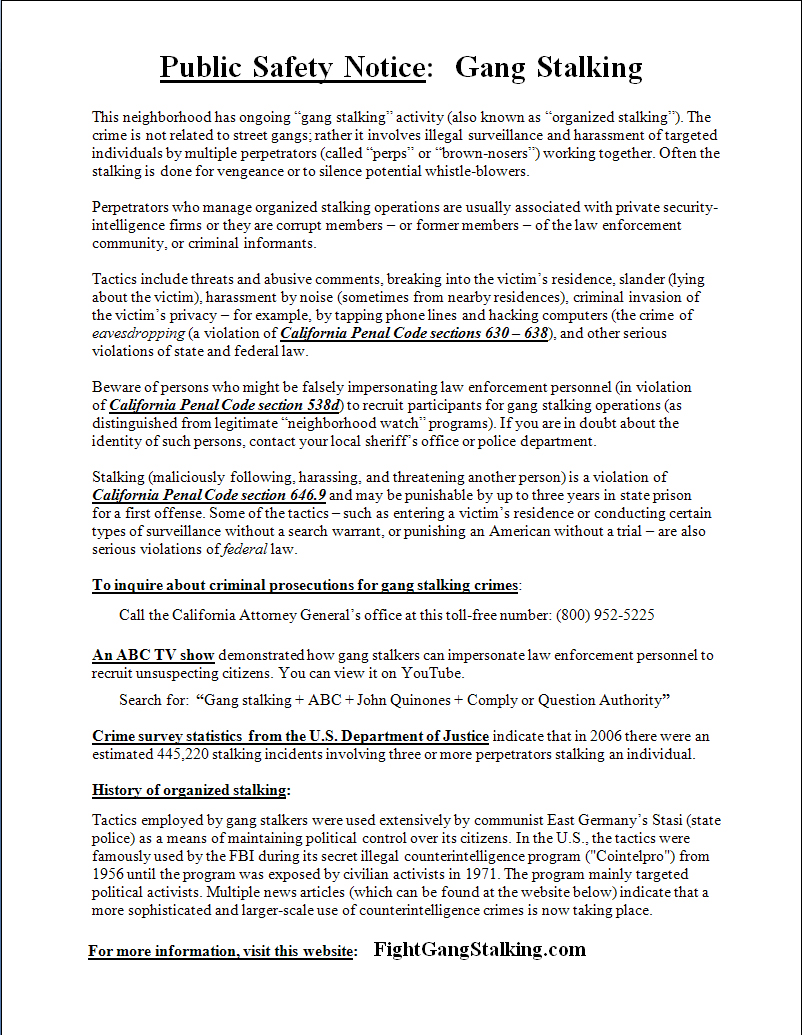 Past experience has already shown me that this type of activity does indeed occur, although I don’t endorse the ridiculous claims you’ll find on the FFCHS site, which is a disinformation outlet designed to ensnare gullible people. Illegal counterintelligence, surveillance and harassment is widespread within American society — and websites like the FFCHS and many others serve as “honey traps” to target individuals into thinking they’re receiving help.

The fightgangstalking.com website offers a wealth of information that reveals what the FFCHS is really up to. The FFCHS has been in the news before as a front-operation for illegal counterintelligence run by law enforcement (and private contractors). Disinformation agents are used to plant stories and gain intelligence on targeted individuals who are lulled into believing they’re receiving help and assistance.

But here is where it gets even more interesting, returning back to the Baton Rouge shooting case. This is is the second shooting by an individual who has had alleged contact with this false front.  A Freedom of Information Act request for the emails Aaron Alexis (Navy Yard shooting) sent to the FFCHS was denied. Even the web cache of this page has now disappeared, although I’ve not bothered to look too hard elsewhere.

I’m going to choose to ignore the claims made by the disinformation website FFCHS altogether, finding them without any credibility or even a meaningful agenda that makes a lick of sense. If this is a fraud site, it’s not a very good one. However, the very fact that this site even exists — and its two alleged ties as reported by two separate newspapers to two separate so-called “random” shootings is what is truly interesting.

We are left to speculate on what this may all mean. Either the FFCHS story as told by the media (CNN and New York Post) is false (and a red herring), or it’s true. If it’s true, we do not know if the two shooting cases have any relationship to their membership and contact with the FFCHS. But the sheer odds of this happening are quite astronomical — and that is worth paying attention to.

Either these are planted stories by the media in cahoots with law enforcement, or there is some kind of very strange and disturbing connection between the FFCHS and the shootings. In any case, the number of disturbed and mentally ill people that will fall for this sort of mind-control is alarming in itself — as the country has now seen. If the FFCHS is in fact a illegal counterintelligence operation run by law enforcement and ex-law enforcement as suggested by fightgangstalking.com, it’s backfired rather badly.

Why the media dug this up — and then did nothing to expose the FFCHS themselves is also very odd. We have to consider all the possibilities of their gullibility and incompetence, or their cooperation in a massive disinformation campaign or perhaps it is something else altogether. But clearly, something is amiss. There may be other connections and cases which I’ve not heard about yet.

There is no doubt that gang stalking actually does occur (if you do the research you will know this to be true) and it’s quite widespread, and it may be that these disinformation websites are intended to help defuse this reality while appearing to be offering a helping hand. The problem with most gang stalking websites (and there are quite a few) is they’re pretty damned kooky and they attract a lot of connedspiracy theorists that covers the entire conspiracy spectrum from alien abductions to end times rapturists and there is little to none “housekeeping” to keep the conversation and topics on reality, yet it is also true that some of these sites are actually disinformation websites specifically designed and funded to attract unstable individuals. To what end is anyone’s guess, but as the evidence shows, it can have very tragic consequences.

The danger here should be obvious — you can’t trust anything that you read these days, not without a lot of research and factual evidence to back it all up and secondly, there does appear to be an agenda to engage with conspiracy believers even to the point of encouraging them to action somewhere along the way. The media appears to be quite complicit in this propaganda matrix and if not (which I don’t believe is true), they’ve done an absolutely miserable job at informing us and engaging in proper investigations.