Contemplating how much time we all have left before life gets extremely difficult – and then impossible – makes you wonder about the life you have lived up to this point.

There is a saying that says (without looking it up) – “a life not examined is a life not worth living“. Examining life – especially your own – is a very useful exercise.

What have you done? What do you still want to do? The collection of experiences we have is the timeline of our personal history. There are some things I’d still like to do.

I recently came across a travel blog while exploring some of these thoughts. The author say’s he’s traveled to 193 countries.  That’s pretty interesting.

However, there wasn’t much on the site. It sort of sounded like the guy flew from airport to airport, chalking up countries one by one, scoring stamps on his passport.  Not very interesting.

But the author made this statement in an article posted: Traveling = freedom.

I gave that some thought because it didn’t ring right.  I don’t think it’s true. There’s a whole lot more to freedom then traveling. So I posted this:

Plenty of people travel no where at all and like you, believe they are “free”. Traveling then, it something else.

Traveling is also “experience”. But experience doesn’t mean freedom either.

Look back over history, before traveling became vogue. People thought that they were “free” then and enjoyed many freedoms. Many never left the homestead for example…

Freedom must mean something else other then traveling. It’s a important distinction (critically important imo). Your software does not allow enough room for a full response – but freedom is all of the following: choice, responsibility, autonomy, opportunity, acceptance, respect, tolerance. All of these attributes and more describe freedom. You really can’t have freedom without all of them.

However, “traveling” isn’t in the list anywhere. The choice to travel is – whether you go or not. The distinction matters quite a lot. Choice conveys opportunity, responsibility and so much more. Freedom is doing the things you want – and accepting ALL the consequences.

It doesn’t matter if the guy rejects this mild rebuttal or not. I’ve traveled, some – but not to 193 countries. If I had – I’d like to think I’d have learned a lot more about traveling and what freedom really means. I’d also probably write about it – a lot.

This guy has traveled for 23 years (ie., “the real deal”). His is an interesting story too. It’s also a little sad. I’m greatly mystified how he could have traveled when his wife was ill.

America claims to be all about freedom, but it’s obviously not. It has no tolerance or respect for the freedom practiced in other countries for example. It does not convey any personal responsibility either. I’ll discard any more negative comments simply in the hopes you’ll actually read this.

What is conveyed as “choice” here in America simply isn’t. Choice involves more then a predefined set of selections. Choice means you really do get to choose independently of any coercion. The “choice to fly” for example is no choice at all. Choosing between being groped or not flying is simply coercion. The choice was already made for you, in advance – without your consent. An entire population of people is now being coerced.

It’s very clear that this country has gone the way of others before it – removing honest, uncoerced choice and responsibility for self to the dustbin of history. What we mistakenly call “freedom” in America is really coercion on multiple levels with varying threats and punishments. You can “choose” the degree of insult or invasion (or robbery) you’re willing to endure.

That’s no choice at all. It’s certainly not freedom.

I thought I was going to write about doing some things before I can’t.  Sometimes it’s hard to not press home a point, probably because it so often needs to be said…

Speaking of choice…  Fast forward a dozen years.  Assemble what you know, understand and can reasonably project about the future. Eliminate all the hopium, empty promises, unrealized expectations and wizardly technofixes – what is left? Do you realize that you’ve just made a plausible inference (#6), using expert testimony (#5), and the method of history (#4) – click here for explanations – to “deduce” with reasonable accuracy what can be expected?

In my last post, I’d attempted to convey how we can come about knowledge. Understanding Truth provides us with an opportunity to learn from what we know. A projection of events into the future isn’t unreasonable or even particularly hard – if we use a few tools. Doing this permits us to relate to what our future may actually be – before it happens.

I recently read through a few older post of mine. In Future Prep – Part III (Sept. 2006) is very accurate 7 years later. Environmental and ecological collapse continues; sudden collapse did not happen; bankers and mortgage holders definitely went after “their property” against homeowners; and so on. We’re in the midst of the collapse right now, but the bureaucrats and their rules did not go away; and society continues to demand all of it.

Obamacare wasn’t even dreamed up back when I wrote this – but the paragraphs that talk about capturing YOU are all about Obamacare or anything like it. Government got a lot bigger as projected even while more Americans became unemployed.  You are encouraged to read this post and reflect on the events since.

The future of America is a slave-State. This is the logical extension of a modern society that has reached it’s limits of finite resources.

I’ve written about freedom in a lot of posts in a lot of different ways. Freedom is not found in what you have – which one idiot tried to convey. He was convinced that because he could buy whatever he wanted, he was free. He did not care if the NSA, DHS or the FBI probed his iPad with a cotton swab – he was “convinced” that his purchasing power and opportunities to “buy” was the same thing as freedom.

Americans are in a perilous place. There is a overall ignorance of basic concepts, geography, morality and responsibility that can bring you to tears:

I’d still like to travel. I know that’s not freedom. But it is life, and experience, and even an opportunity to “see different”, “experience different”.

They’re making it harder and harder to travel. Leaving the country is now “suspicious”. It’s unfathomable what they are afraid of, but I give up expecting common sense from government lackeys. The fear and paranoia they project is totally unwarranted. But it’s not about “them” as Future Prep III points out – it’s always been about YOU. 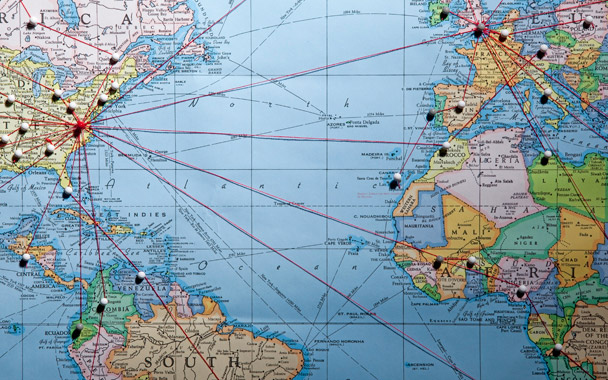