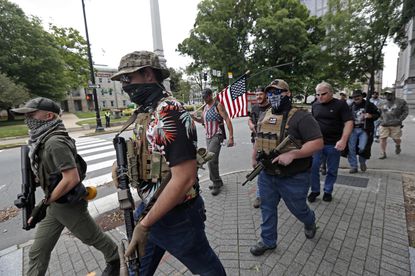 CNN finally reports on the extreme level of rhetoric for violence, murder and civil war being called for on right-wing media sites.

Extremists intensify calls for violence ahead of Inauguration Day

Read the article. As expected, the intensity and calls for violence has escalated, dramatically.

“Plans for future armed protests have already begun proliferating on and off-Twitter, including a proposed secondary attack on the US Capitol and state capitol buildings on January 17, 2021.”

At this point, everyone should plan on staying home (stock up), be on the defensive and ensure you and your family are safe. Anything could happen from this point forward.

I’ve been warning about this possibility for some time, but now that it’s finally national news, millions more Americans are going to be deeply alarmed (and reactive).

There was no excuse for law enforcement to be “surprised” as the article states, this is a massive failure on the part of law enforcement when the Capitol was attacked as it was pretty clear in advance what they were planning. And they’re at it again.

I’ve now seen enough evidence – it appears a coup was attempted under the cover of the riot; with indications that numerous public officials and personnel were aware of this in advance. I would prefer to let the evidence and the investigation prove this theory out, as I do not want to start yet another stupid rumor, but at this point, I think this likely what happened on January 6th.

If true, this means they’re not done trying to overthrow the U.S. Government and the 2020 Election results despite there STILL being NO evidence of the claims of fraud. This group of connedspiracy adherents is hell-bent on breaking the law and violating the US Constitution by any means possible to prevent Trump being removed from office.

This is far worse then just another Trump shit show, or a hissy fit “melt down” of the Commander in Chief in his final hours as President. This has a potential of nation-wide mobs attacking government building, officials, politicians, law enforcement and anyone else who might get in their way – all of which is based on complete lies and fabrications.

If there is more evidence forthcoming to support these reports, we could expect martial law to be declared any day now, or at the very least, the mobilization of the National Guard to protect government office, infrastructure and other assets (including politicians, judges, etc.) that might be considered “targets”. We should also expect a massive law-enforcement response to break up these groups in advance, but we’ll have to wait and see if that will happen or not.

It is entirely possible now that what we have feared and dreaded the most is about to happen. I sure as hell hope not, because it will be a huge, bloody mess with zero chance of success and a lot of pain, suffering and needless death.