Can you find the time to watch this? I strongly suggest that everbody on the planet pay attention at this time. This is REALLY important to understand.

What is contained within this video at the United Nations Framework Convention on Climate Change (December 6th, 2014) is going to scare the pants off of you.

Watch the video in your browser window (new window). Update: there is a another very important video I also recommend. 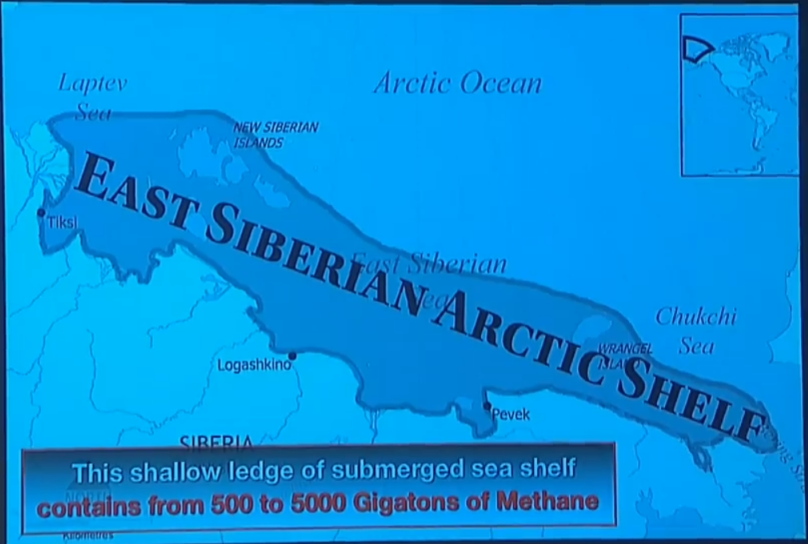 At 7:35 – “Millions of square miles of territory is now releasing its methane cover”.

The estimate figure is 50 Gigatons of methane (now being released, this is not later – this is occuring now) – that’s 50,000,000,000 (Fifty Billion Tons) which will more then double the atmospheric loading of Co2 as is slowly breaks down (going from 400 ppm to over 800 ppm and lasting hundreds of years).

This question was posed to Dr. Peter Wadhams, Professor of Ocean Physics – “Do you think civilization could survive a release of 50 gigatons of methane?”

“I think if you look at the existing predictions of global warming rates, what’s kind of eerie is the fact that the business as usual projections, even the cautious ones used by the IPCC are giving us about 4°C of warming by the end of the century. 2°C has been taken arbitrarily as the level at which nasty things happen, but I don’t know why.” (I do – I covered this long ago here).

“People that have calculated what 4°C would do to food production, to the die-off of forest, to acceleration of warming due to various extra feedbacks that would kick in, the general conclusion is pretty dire. If you get to 4°C of warming, the collapse of civilization is what is going ot happen, because the world won’t be able to sustain anywhere its present population“.

Dr. Wadhams is considered one of the world’s formost experts on climate and his opinion is we’re not going survive these changes (as it stands today).

The IPCC admits to 4°C of warming – but nowhere do they admit that this is the end of civilization as we know it – yet scientists already know this to be fact. So it’s not hard to imaging that some of these scientists are shitting their pants at what the data now presents as our future.

“Some scientist are indicating we should make plans to adapt to a 4°C hotter world. While prudent, one wonders what portion of the population could adapt to such a world. My view is that it’s just a few thousand people seeking refuge in the arctic or Antarctica.”

“In order to stay below 2°C of global warming, 66% to 80% of ALL fossil fuel reserves of ALL companies and nations are UNBURNABLE” (do not use it).

This will create 28 TRILLION DOLLARS (today’s figures) in “stranded assets” (and the massive cascading bankruptcy of millions of businesses) with the very fabric of civilization severely disrupted.

Or not. The alternative (and far more likely) scenario is – WE WILL BURN these carbon sources anyway and therefore, STILL guarantee our demise. This means EXTINCTION (all of humanity and the entire living biosphere).

You do know what a catch-22 scenario is, correct? That no matter what choice or direction you take, you’re still going to pay dearly for your past mistakes? Well that is exactly where humanity finds itself today.

I have no idea if the carbon sequestering proposals at the end of the video are feasible or not. My own research into green energy has revealed that this is still oil-fueled energy creation in reality.

Carbon sequestering is the stop-gap measure being proposed – and it will have to be done for well over 100 years (minimum) and will have a gigantic impact upon civilization.

Do I agree?  Absolutely – DO SOMETHING!!! I can’t stand the idea that we just go quietly into the night and accept our fate. Nobody in their right mind would actually do this (although this is being proposed by some).  Nobody will lay down and let themselves starve to death if they have the strength left to try.  Neither should humanity just give up even if it looks hopeless. I strongly refute such people that suggest we quit and give up (they’re mentally disturbed individuals). We try – until we can’t. THAT is the human story throughout our 200,000 year history.

While costs are a factor – what I expect will happen (as in any severe crisis) is costs won’t matter when this is the last resort for survival of the planet. Which means costs will be at least a thousand times or a million times higher then being projected. But costs don’t really matter.  Civilization as we know it is toast anyway. Virtually everything you take for granted today is going to be wiped out.  What we have now will all fall apart (soon) and a global emergency response will slowly gain ground as our delayed response finally gets underway.

There will be a lot of objections and naysayers, but physics and reality are not subject to ignorance or opinions. We try – or we die, it’s that fucking simple.

Update: If you’ve not watched the second video yet, I suggest you do – this contains a lot more information. http://unfccc6.meta-fusion.com/cop20/events/2014-12-05-12-00-abibimman-global-arctic-methane-emergency