Anybody besides me “fascinated” by the speed of the planetary disintegration now taking place? Huge, utterly irreversible changes are now unfolding faster and faster. Sure looks like the non-linear effects of climate collapse are well underway.

For the second time in less then a month – in the dead of winter – the North Pole has risen above freezing. Hah! I can’t even image what the melt profiles must look like up there.  A whopping 90% of the human-induced heat energy has gone into the oceans.

This is why so much sea life is dying of starvation and pathogens. Their food source has moved (if it can swim fast enough) and the water temperatures have shot up so much that toxic blooms and algae are killing off what remains.

And yet…. the idiotic line-up of climate-denying clowns continues to take front and center stage at the (s)Election 2016 three-ring circus. Wow! The disconnect from reality found in America is absolutely stunning! 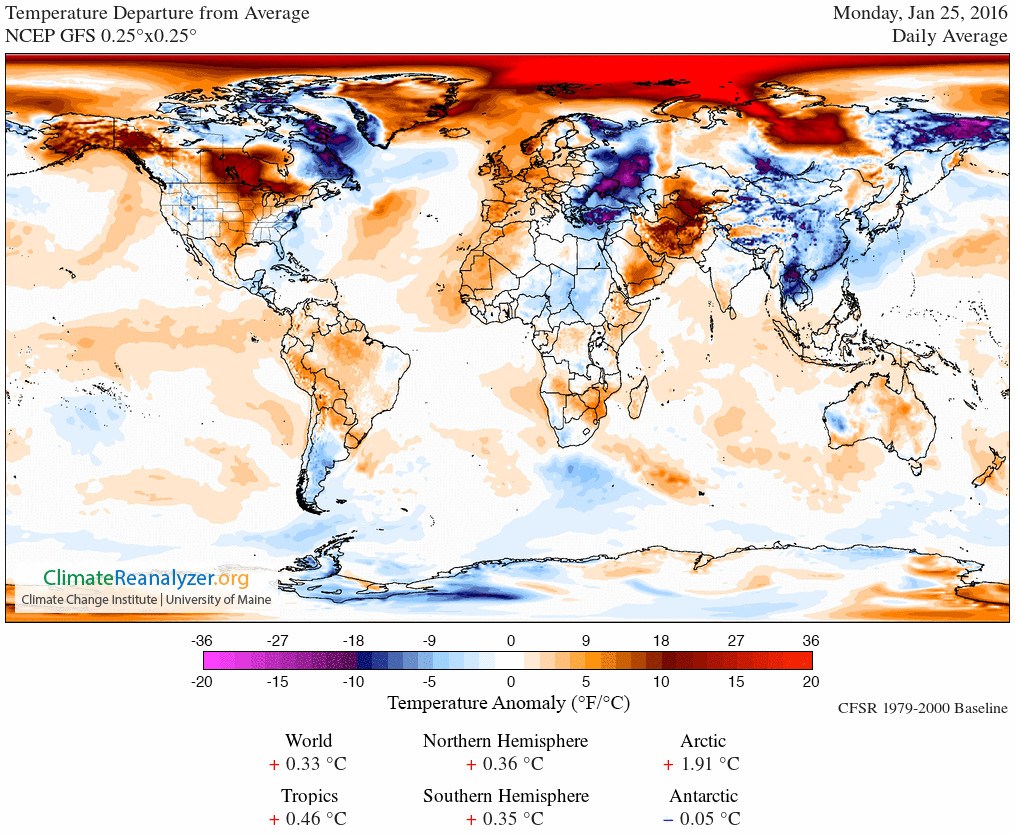 So it’s “summer” in the Arctic in winter… well, almost. It’s sure isn’t the least bit normal or even expected.

And if you understand this article, it’s going to be a long, long time (100,000 years) before we can expect any serious cooling.

“So if you continue to emit a substantial amount of carbon dioxide, the Anthropocene will last for hundreds of thousands of years, before systems return to anything like “normal” conditions”, he says.

The snow in the eastern U.S. may seem like a lot, but it really isn’t. It’s not the beginning of the “ice age” some posters have claimed either. The planet is going to continue to warm up, evaporate more water into the atmosphere and unleash more hellish storms then ever before. But overall, it’s going to be hot, then hotter, and then hotter still – for a long time to come.

The same thing is happening in the environment, with a disintegration of the food web. Another “Anthropocene Effect” by homo sapiens sapiens.  Like the climate, we’re watching the collapse of the environmental support systems as they stagger under the load of billions of humans.

Are you following the news on the Zika virus? Or Argentina’s plague of locusts? Both are definitely climate-related. But that’s not true according the clown line-up vying for the U.S. Presidency. These idiots don’t think any of the changes occurring in the world have anything to do with human activity. No amount of “proof” will suffice. Not the melting ice, not the extreme weather events, not the dramatic shift in the seasons, not even the freakishly hot North Pole (again).

I wonder what it is like to live in la-la land while pretending you know what you’re talking about? Exactly what television station are these nincompoops tuned into? The Barney Show?

“The science can’t back up that it’s warming,” Sen. Ted Cruz said Wednesday. “If you are a big-government politician, if you want more power, climate change is the perfect pseudo-scientific theory. . . because it can never, ever, ever be disproven.” Ted Cruz is a pseudo science onto himself

Give that man a cookie… and hope he chokes to death on it.

In another stunningly dishonest article, this time from scientists, we’re reminded that “Climate change will have increasingly negative impacts for at least the next five decades,”.

Obviously this is yet another watered-down claim that meets what passes for acceptable journalism these days. Or maybe they already know that humanity may not have much more then 50 years left…

We are all witnesses to the most significant events to occur in human history… yet a lot of the world’s population (and leaders) are completely and utterly oblivious to this fact.

Call this the “human” disintegration then. The abdication of common sense, denial of reality and absence of thought. The immersion of an entire population into the soothing bath of “self” and “gratification”.

This had to happen in an advanced civilization. Someplace where the total disconnect from Nature and the real world was possible. Where a constant barrage of propaganda and entertainment was force-fed into the minds of the human population. Where the sky was blocked out, the dirt was covered up, the animals and bugs were absent and the only “connection” the humans had was in perfectly manicured human-constructed “parks” complete with “doggy bins” and paved walkways.

How far have we fallen? Pretty damned far.

We’re nearly unrecognizable now as being human. Like the pristine cellophane wrapped meat that conceals the horrifying torture chambers of our ‘sustenance’,  we have sought to modify the entire surface of the Earth into a packaged corporate ‘tour experience’ devoid of reality – one that won’t despoil our designer clothes, or disturb our sheltered minds.

Well, not for much longer. Huge, cataclysmic changes are well underway, unfolding at Nature’s inexorable pace. Our short-attention spans may prove to be sorely inadequate for us to truly grasp what is happening, but that won’t matter. We’ll go on living, while we can, as if nothing matters, because in the end, as it will prove to be, nothing did.

The disintegration we unleashed will be complete – and we will cease to be.