I almost don’t want to write this article, because every time I do something like this, it never goes well, although it should if people were truly interested in learning. But we are no longer dealing with people who are healthy with their perception and acceptance of reality. Everything to them is “fake news” now if it challenges their preconceived bias (and ignorance). So you can’t actually tell them or share with them anything – nothing gets past their biased filtering system. And if you DO try to shed some “real truth” on a topic or subject – it generally backfires.

There is a very poorly written article over on Zero Hedge – a site that I’ve come to truly despise for its incessant propaganda and stupidity (but that’s beside the point) that exemplifies the paragraph above. The article pretends to be “informative” while spinning it’s own version of the truth, which in this case, isn’t the truth at all. The article in highly inaccurate, misleading and even dishonest.

What they did was use a Quinnipiac University National Poll from August 14, 2018 for the starting basis for their article. They didn’t like what it actually had to say – or the results the poll obtained – so they wrote their “own” version of events and conclusions while withholding critical facts from the poll itself.

They begin their opening salvo with this statement of “fact” (which it isn’t):

Over the course of his turbulent presidency, President Trump has accused various media companies, with special attention reserved for CNN, as being purveyors of “fake news,” slamming the “fake news media” as the “enemy of the people.”

The only thing that is truthful here is President Trump has indeed said this, repeatedly, but that does not make him right.

Next, Zero Hedge shares this infographic: 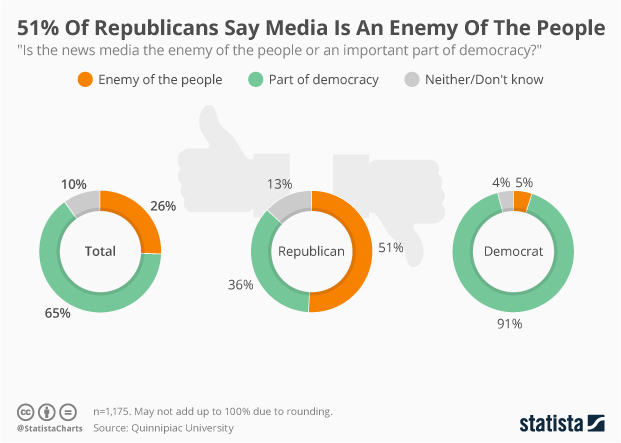 This is in alignment with the claims that Trump has been making, but it doesn’t tell the whole story. Barely more then half of Republicans polled think the media is the “enemy of the people”, and it certainly isn’t the majority of all people polled – not even close. Overall, just 26% think the media is the enemy (all poll respondents, Democrats, Independents and Republicans). Clearly, the weighted amount falls squarely on the Republicans. But this isn’t making this group happy, as Zero Hedge goes on to fabricate:

As far as media corporations being ‘private enterprises’ and therefore free to demolish the freedom of speech (even censoring major media players, like Infowars, simply because they whistle to a different political tune), that is quickly becoming revealed as nothing more than corporate cover for state-sponsored machinations.

Infowars was neither a major media player or “demolished” for free speech or banned on social media platforms for a “different political tune” – not a single one of these statements are true. Infowars was banned because of repeated rule violations, and failure to pay fines, and operating without a license. In other words – playing by their own rules, the devil be damned. This has nothing to do with free speech. Infowars is free to babble on however they like on their own site, but to hear that whiny crybaby Jones talk about it, you’d think the world ended.

Infowars got caught, which was in my opinion, was way overdue. I never focused on the rule violations, fines or license issues of Infowars, but I did focus on the lies, dishonesty and outright fabrications being regurgitated by Infowars on a daily basis.

Only 31 percent of American voters like President Donald Trump as a person, while 59 percent dislike him, according to a Quinnipiac University National Poll released today.

“Not the kind of numbers that gets you a date to the prom – or helps your party as the Midterm Elections approach. Only one in three Americans ‘likes’ President Donald Trump,” said Tim Malloy, assistant director of the Quinnipiac University Poll.

“For President Trump, another Groundhog Day. His job approval gets another cool reception in midst of the sweltering summer. What does it mean? Simple: The base is hanging in and the rest aren’t buying in.”

President Trump does not treat people of color with the same amount of respect he affords white people, American voters say 54 – 39 percent.

“The media, so frequently excoriated by the White House, is not considered an enemy of the people. Far from it,” Malloy said.

President Trump is not tough enough on Russia, 55 percent of American voters say, as one percent says he is too tough and 36 percent say his attitude towards Russia is about right.

It is never acceptable for a presidential campaign to obtain information on a political opponent from a hostile foreign power, voters say 79 – 12 percent, including 69 – 19 percent among Republicans.

Special Counsel Robert Mueller is conducting a fair investigation into possible coordination between the Trump presidential campaign and the Russian government, voters say 51 – 33 percent. The president is guilty of wrongdoing in this matter, 42 percent of voters say, while 43 percent say he is not guilty.

Ok, now you know – and now is a good time to read the asinine commentary over on Zero Hedge. It’s never any good or informed, it’s just more of the same blind ignorance that we’ve all come to expect from this site. None of these idiots bothered to actually read the poll apparently, but what little bits of truth that stuck in their pea-sized brains remained, is shown here in some samples:

I would love to see how the question was asked on this one; because 51-36 seems low.

Some people were probably torn because they didn’t know how Fox News/Breitbart etc fit into this.

If you surveyed all the many Republicans I know, probably at least 80%+ would say the MSM (the 95% that is liberal controlled) is indeed the Enemy of the People.

So this must be true – because First Rule says so – without providing any facts or evidence or anything like a real poll. Comments range from “Barbarella” to “fake news” to murdering all the “liberals” and all points in between. The poll simply cannot be right (but of course, they are).

You cannot hold up a mirror to these kind of people and get them to examine their own bias and ignorance. Many have tried (including me), but it’s always been a fruitless exercise. They don’t believe anything that does not support their bias. This creates a dangerous precedent and a snowball effect – reality doesn’t have any impact on their opinion, biases, voting or decision making.

This video fits in to what I know about Zero Hedge – and this is their “rebuttal” to the negative press they received (Bloomberg site), which no matter how you look at it, engages in some serious character assassinations (and notably, does NOT answer the allegations presented). But a former drug dealers testimony isn’t to be disbelieved 100% of the time – the allegations made are worth considering.

I made my mind up about Zero Hedge years ago – long before knowing any of these sordid details. My mind is still made up. It’s a useless website spreading disinformation and connedspiracy, promoting a culture of idiots and morons who are so hopelessly biased that no amount of reality will ever sink in. And yet numerous website who claim to be “informed” often quote Zero Hedge articles, like Rice Farmer, Cryptogon, Rense and many more. If I find a link anywhere that points to a Zero Hedge article, I no longer bother reading it.

The Rational Wiki has nothing good to say about Zero Hedge. No clear thinking person does either.