The snow wasn’t too bad, we’ve had sudden, enormous melting due to very warm temperatures, but next time, build it closer… 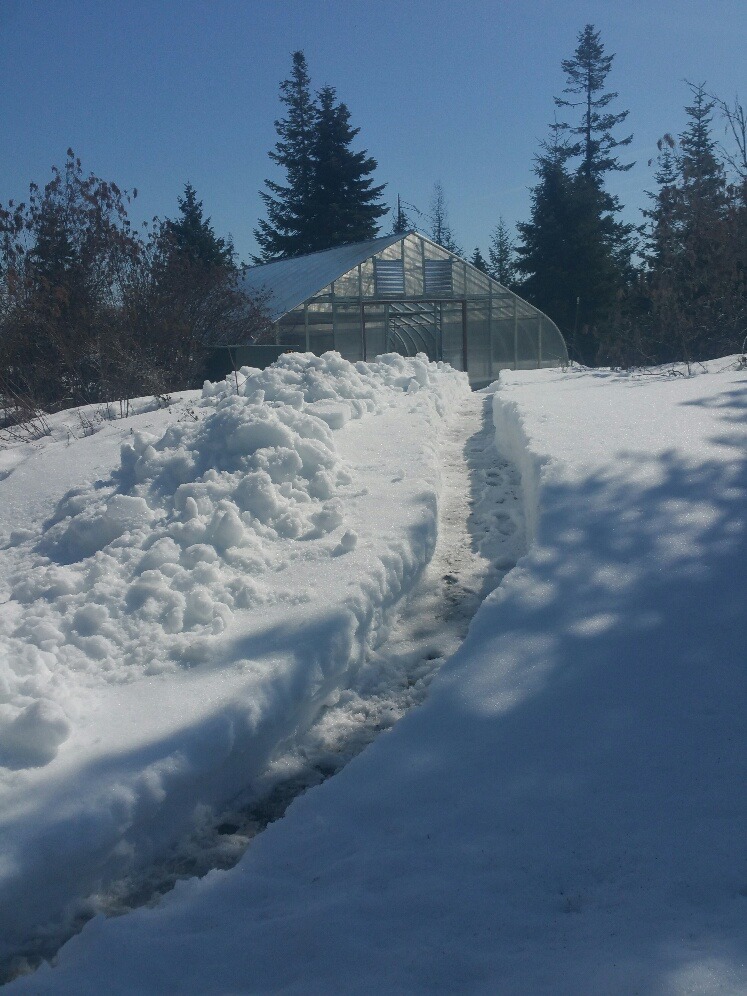 This is what it looks like after the long winter: 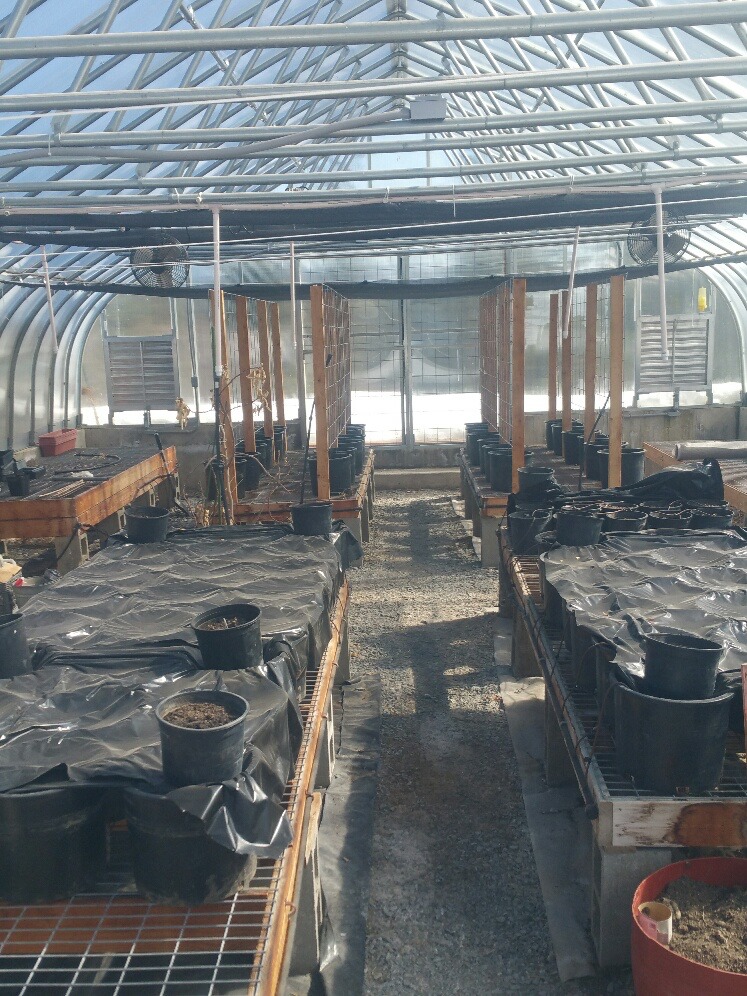 There was no damage, despite the heavy snows we’ve received. During the winter, the entire greenhouse got covered in snow. 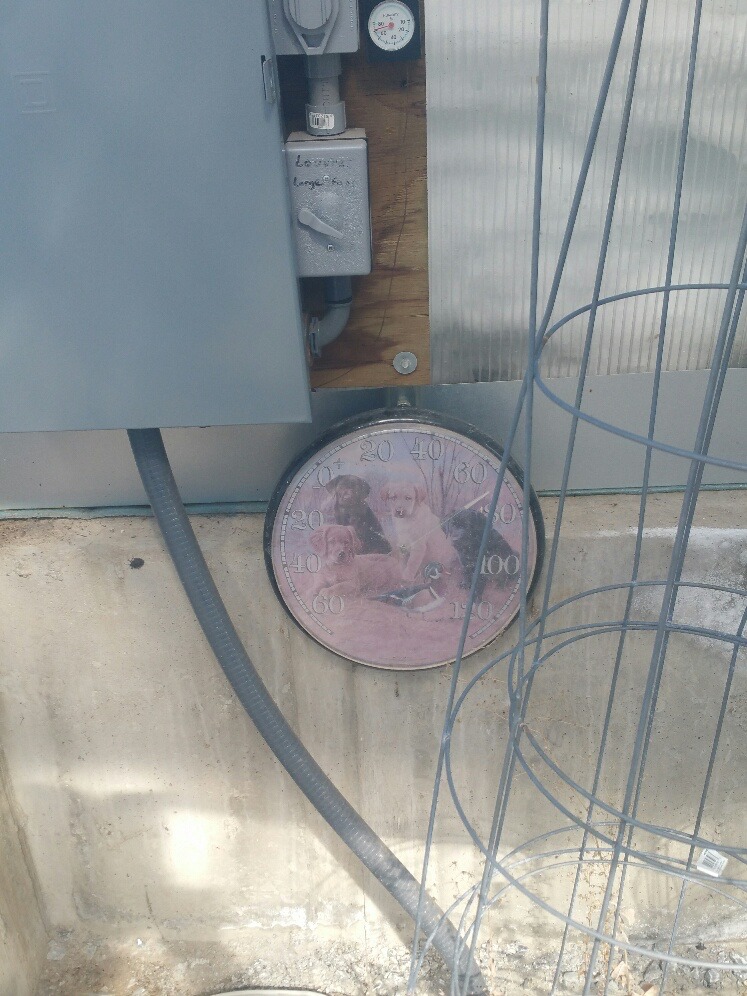 Because I might still have some non-desirables (black widows, not native to this area at all), I dealt with their likely locations first. I don’t care about the other spiders that inevitably show up.

Next, I’ll prep the pots with new soil amendments and get some spring planting done. This is the time to grow root crops (radishes, carrots, beets, etc.) and cold weather crops like kale, broccoli and whatever else I can think of. I’m totally out of seeds this year and did not allow any plants to bolt (seed) last year (on purpose).

This might be my last use of the greenhouse. I’m probably going to have to sell this place and I don’t think I’ll build another greenhouse, certainly not this size. It’s been great, has held up amazingly well to the heavy snows (was over-built by design) and is a enjoyable place to spend some time with planted “nature” that you can eat.

I’ve been thinking a lot about the near-total failure of people who are not properly prepared (or prepared at all) for global climate food shocks. I don’t get it – why they’re not making preparations, learning skills, getting in the time, practice and supplies they’re going to desperately need. It’s going to be very, very ugly when people finally chose to wake up and realize they’re not ready for food shortages. Jonathan Hollerman’s comments still ring true to what I’ve also seen among preppers for a long, long time now. He’s echoed my own thoughts on this for decades. Almost everyone is food under-prepared.

This is a stupendously huge issue. It’s been mentioned in every significant climate report and scientific study (food shocks coming). But the message does not seem to be getting through (for some reason).

A friend, who knew me way back during the ministry days has stayed in touch all these years. He calls and checks in from time to time. He has mentioned this before, but during his last call, as I was sharing with him the unfolding events happening worldwide, he commented again, “Well, we’re just going to come to your house” (and share your food). Uh, no – you’re not. I’m not responsible for you or anyone else and never will be. I’ve got my own tribe right here that is depending on me, and I’ve spent years preparing my family. That’s what YOU should have been doing all along, but didn’t, despite hearing it from me, over and over again.

He’s like a lot of people, getting caught up in the “guns and bullets” bullshit and has very little food preparations, less then 3 months by his account (which means maybe a month because everyone has far less then they think from long experience – see Hollerman’s comments if you do not believe me), although he does have land (but no water – he survives on water deliveries for house and horses). That’s not a survival or prepared strategy, but it describes millions and millions of Americans who don’t think anything is either going to happen to them (wrong), or that they’ll get the help they need to avoid any unnecessary hardship (wrong again).

What happens when the water truck doesn’t show up? Or the grocery store empties out? He say’s he’s worried about “EMP’s” (electro-magnetic pulse) but what is certain to happen is deadly climate change. He’s not growing any food either (and can’t).

It is plainly obvious that governments around the world are already seriously overwhelmed by climatic disasters (if you’re paying attention, you would know this). And these disasters are only going to get worse and worse. Preparations can help you through these events, and make ends meet when things go wrong. Why people don’t “get” this basic piece of common sense is a mystery. And many that do – run off and do the wrong kind of things (buy useless crap).

You – and everyone else – are on your own. THAT’S why their are “scavengers” portrayed in apocalyptic movies. These idiots failed to prepare. But becoming a refugee is a incredibly STUPID idea and it will be the death of millions. If my friend doesn’t wake up to this fact, he’s on his own, something that millions of people will find out the hard way (and die).

That’s not harsh – that’s reality. Robbing food from my family is the same thing as giving them a death sentence because I’m having to feed someone who was careless. I have helped hundreds of people where and when I can many times over the years, but that help isn’t meant to be indefinite (or abused), especially when I can’t help anymore. He makes good money, but buys crap he doesn’t need. I don’t make any money now and got rid of what I don’t need. Two totally different philosophy’s, two different approaches to the same common problem.

This is your problem and you have to solve it for yourselves. It’s also your responsibility, and no one else’s.

6 thoughts on “Digging Out For Spring Planting”