And one of your (but not mine) favorites, Jones.

I’ve long warned that government will turn against the people and attack. This is what they do to retain control.

This image is unverified. If anybody has any information on this, I’ll update this post. 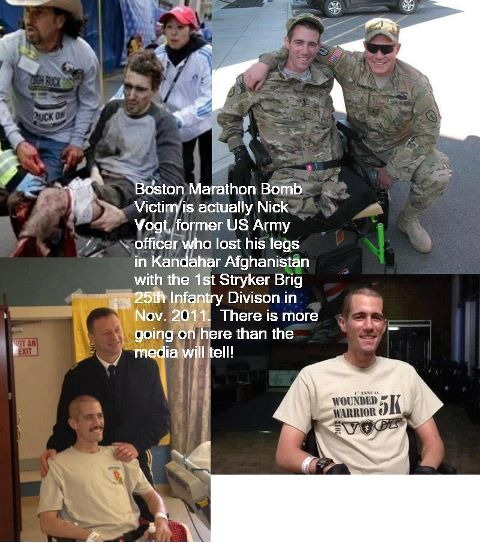 There is now a ton of articles and information pouring forth regarding the Boston bombing.  The known facts don’t make a lot of sense.  The biggest known deception right now is the coverup, particularly the “drill exercises” underway, which is now being claimed as not happening.  We know this isn’t true.

Other very strange oddities, suspect was supposedly under surveillance for years: Boston suspect’s mother: “He was counseled by FBI for three, five years”

There is plenty more. Why did FBI fake Boston Bomber surveillance video?

The FBI surveillance video is in fact a digitally manipulated slideshow of still photos and not an actual video.

This is evidenced by the existence of ghost images appearing in between still photos in the so-called video as a transition effect is applied during the fade between frames.

As many in the alternative media have already pointed out special-ops were photographed all over the site of the Boston Marathon bombing before, during and after the attacks.

While there is speculation those photographed could be Navy Seals the overwhelming majority of the evidence points to those in the photograph being part of a for hire black-ops mercenary squad known as Tradecraft.

There is a lot more photos and evidence to view and consider on the title link above which I strongly suggest you examine.

Update: this is the supposed “tweets” by the bomber — which make no sense at all if they were as claimed, written while he was “on the run”.

Allegedly, the bombers were “bragging” about their attack, which considering the events, makes no sense.  The elder was married with a child.  After allegedly conducting the attack, they’re accused of killing an MIT guard, then stealing a car and kidnapping the driver, who was forced to visit ATM machines and make cash withdrawals.

Nobody knows what other people are capable of, unless you’ve seen them already in action.  Perhaps their own mother and father did not know.

However, Occam’s Razor applies here:  the most likely explanation is this is another false flag attack — because it has been done so often before.

Would they overtly kill Americans?  Personally, I have no doubt about this point. They’ve done it before, and will do it again (repeatedly).

If you need a “primer” of how we’re under assault, here is a video from Jeff Rense, with Gereld Celente.

Nice summary here by Jeff Rense. I enjoyed the video section just as much.

Under Attack From All Sides

Update: Even in America, this sort of action is NOT supposed to be taking place.

The number of bootlicking sheep that think this is ok need to go back and read the law.  It’s why the law exists, to protect the people from out-of-control abuse.  There are no “exceptions”.