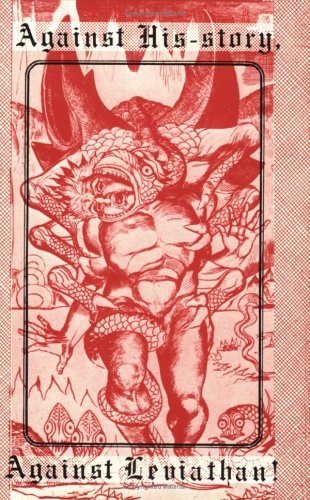 I’ve finished “Against His-Story, Against Leviathan” by Fredy Perlman. The most interesting chapters were about America and how the rapacious Leviathan murdered, raped, plundered and killed off the Native Americans. By then, Leviathan had already become global. Leviathan had already murdered hundreds of millions of people all over the world.

You can find out what Native land you are now living on here: Native land. America was widely populated and settled before the deadly invaders from Europe showed up. The “uninhabited” land supported tens of millions of people who had been here for thousands of years. Leviathan, in the form of Christian invaders and murderers brought plague, death, destruction and stupidstitions which emanate from the Beast to this day.

Everywhere they went, all over the world, the trail of death and suffering was the same. They thought they were bring Progress and Development, but the reality was very different (and ugly).

The death-machine hasn’t stopped. Not enough people pay attention to any of this, being completely caught up into the entrails of the Beast and gaining all their sustenance from it. They can’t see it, don’t understand it and few care to learn anything about it. Progress has interfered with their critical ability to think clearly with billions of humans actively perpetuating the death machine.

Leviathan is now devouring itself in the form of Christian fascism in the “Western” world as competing parts of the same Beast cannibalize the other. The Eastern world is dying from the same fantasies, where Progress devours Life, and between the two which are now really one, the Earth is being totally devastated and devoid of hope.

Civilization and what it is, means and does has been described by different authors and thinkers in many different ways. In my own words, I’ve always believed since I was a child that we should have done things very differently. The world that we perceive around us is not the world that once was. Now, everything is contrived and priced, the very elements are haggled over. Profit replaced Life, and Living succumbed to Death.

This is the business of Leviathan, to overwhelm All and to devour Everything. This is the way of Death which we’ve been taught to falsely call Life, completely blind to the destruction. But life in a prison camp where all are told to slave away their lives on behalf of the Beast is not Life at all. It is merely Existence, with the certainty of non-existence looming nearer and nearer. Nor is the Death that surrounds everything Leviathan does actually Life. Neither Leviathan or the components of this Beast are concerned about this loss, everything ultimately becomes Death because that is what Leviathan actually is. The Bringer of Death.

As esoteric as this may sound, it need not be. Civilization subsumes everything in its path, devouring everything and killing what won’t submit. Entire civilizations are razed to the ground, natural forests are totally consumed, even the very minerals are violently brought up and forced into machinery to perpetuate the death machine. As children, we were all taught this was normal, but they’re hiding the whole truth from us on purpose. We grow up to become slave laborers in the prison camps we call employment that perpetuates the Death Machine, actively devouring and killing the Earth faster and faster.

We’re blinded to this gargantuan Enterprise of Destruction by senseless entertainment and food to dull the senses and cloud the mind. Our “education” includes the deception that we can retire from our labors if we play along and cooperate with the Beast, ever deepening our dependency and complicity to the Death we are each inflicting. We cannot even imagine what we have never known. Our ears remain stopped and stunted with distorted words and meanings. We are not the enemy, “they” always are, but the mirror reveals an entirely different reflection that if we could only really see, would show the horrifying truth.

The Earth is now largely devoid of Life. Entire civilizations wiped out, the vast majority of the Earth’s surface and oceans razed, plundered, plucked and harvested. We really have no idea how much has been lost. Televised films very carefully script film segments from parks and reserves that irresponsibly show teeming herds of animals, birds, fish and other life forms to promote the idea that there is still more to be taken and consumed. Scientists and ecologists and climatologists object to the phony presentations, but Leviathan doesn’t care. The remaining Life must be converted into Products and Profits and the prison camps fed.

This is the only world we now know. We cannot even fathom the change or the loss, even when we are directly presented with evidence of the destruction. Our minds cannot grasp what we have no direct experience with. Our history is but a tiny slice of Our History and we simply have no idea what is now gone. I’ve spent some years trying to gain understanding and still cannot comprehend but the tiniest bit of it, lacking my own history and perspective in time. Stories of teeming herds and oceans full of fish, abundance so great that it boggles the mind have no real meaning to those who have never seen it.

We’ve weaponized Existence, having abandoned Life. Entire industries are dedicated to this destruction, proclaiming “necessity” and “patriotic duty”. This is Leviathan devouring itself, Late Stage Collapse of the Empire. Robotic factories, Mars settlements and artificial flavors all share the same characteristics – devoid of Life. Factory farms churn out billions of tons of processed meats that never ate grass, never saw sunlight, and never enjoyed a warming breeze. This the Business of Death that we have all been taught to call Life. But Life is exactly what it isn’t.

Our years are spent conscripted, scripted and monitored. Google tells us everything we need to know, replacing even our own thoughts. The deeper we are, the more we lose. On the way into town today, I heard a radio advertisement about “staying connected and staying informed”, but the announcer was lying as they all do. You’re not informed, you’re being programmed. Being connected in the same as being put on a drip-feed of cyanide, you will soon be numb to everything. We’re taught to be lazy and let invisible and non-accountable voices make decisions for us. This is the way of Death.

I cannot accurately begin to describe what we have given up, and what we have lost. I know that nobody cares. Nobody will take any interest. Nobody will even bother to read a book, or a blog. And if nobody can do that, then nobody can hope to extract themselves from the belly of the beast. Which means that the destruction and death and profiting from all the suffering and misery will continue. That’s how far gone we are now.

So these words are just my own. Written for posterity. I sense a lot of this when I was quite young. I feel is much more strongly now. I have hoped things would change, but I don’t think they will.