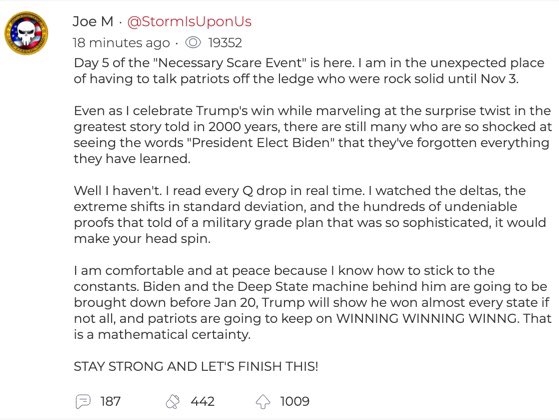 As we should have known to expect, numerous connedspiracy theories, bogus claims and outrageous fabrications are swirling around the 2020 Election.

And then the 2020 Election happened.

Which did nothing to quell the endless bullshit being spouted by various groups and so-called ‘movements’ who are desperately trying to change the real narrative, what has actually (and factually) now unfolded. They’re very, very busy now spouting complete nonsense and spinning tales to keep their followers entertained, agitated and grossly misled.

If you are a ‘Q’ follower, you’re likely as not to be seriously disconnected from reality. You no doubt believe in fictions more the facts and are likely as not to have already imploded your own lives and relationships as you dive down the rabbit hole of deception and despair.

Years ago I wrote a lot about conspiracy theory here on this blog, in a (failed) attempt to educate people to what was real, and what not. Articles like “Surviving Conspiracy Theory, Part I, and “Part II” were written in an attempt to help educate and extract connedspiracy theorists to the real danger presented by ridiculous connedspiracy claims. Yet years later, connedspiracy claims have grown even more alarmingly, leading many more people into a hopeless, dark and delusional fantasy.

This blog post image above shows just how utterly far gone some of these people are today. Allegedly, according to this Tweet, not only did Trump win ALL the votes in EVERY state, but he’s going to be declared the ultimate winner.

Most of us already know that such claims are 100% bogus, but there are those that will believe this. Their collective failure to understand truth, and how to go about actually do that, has cost this country enormous amounts of grief and suffering already and let’s face it – it keeps getting worse, not better. The broad rejection of reason, science, experience, history, testimony, plausible inference and actual evidence has distorted the lives of tens of thousands, even millions of people now around the world.

Their claims they’re making are neither benign or harmless. So far, most of the world has tolerated their endless bullshit, but I do wonder for how much longer? I don’t know that answer, but I’d like to see an end to it, finally. Major media and social network platforms such as Fox News and Facebook are heavily engaged in spreading disinformation and baseless connedspiracies, and next to nothing is being done to actually stop this.

Ultimately, the problem of being accurately informed and the responsibility to do so falls upon every individual. You do not have to be misled and misdirected if you don’t want to be. You do not have to accept everything you’re being told either. Being aware of your own confirmation bias is a good start. If you only spend times on websites and news channels that fit your world view, you are very likely to have very little knowledge about the rest of the real world. And you are a ripe candidate for disinformation if you do not fact check everything, substantiating any and all claims made.

There are dedicated websites that perform these fact-checking tasks that accurately report the truth. I strongly suggest everybody read them – and check their sources too. And there are dedicated sites that expose the frauds, lies, charlatans and fools that are deliberately lying to millions of people. Read those sites also. They are not “fake media”, they are combating fake media and media disinformation. If you don’t bother to do this simple step, then you’ve got nobody to really blame but yourself if you have come to adopt a connedspiracy world view. And your even worse off if you have based a single decision in your life upon any of these connedspiracy claims.

I have publicly denounced various authors, blogs and website here in the past because I think these sources are doing great harm to their readers and followers. Yet most of these sources have increased in their readership and fans, not because they’re spreading the truth, but in spite of the real truth. NONE of their claims have been proven true to my knowledge. All of their predictions, fabrications, lies, distortions and assertions have all been unraveled into stinking piles of bogus bullshit. Many of them are fixated on specific issues and details and will interject conjecture, straw arguments and outright fabrications to bolster the many erroneous claims you can find there. Everyone should know by now that such tactics are clear signs of dishonesty and deceit.

But here we are, well over ten years later since I first wrote on this topic, fighting the same stupid battles for basic intelligence, awareness, knowledge and facts. We all know that deception pays, and will gain plenty of readership and popularity, which in turn gains huge amounts in advertising revenue. Most of these sources are simply doing this deception for the money as evidence by the crap they try to sell you and the stupendous levels of advertising they stuff onto their websites. They’re making hundreds of millions of dollars deceiving millions of people per year. If you don’t see anything wrong with this, then you need to check your moral meter at the door.

I don’t and won’t advertise this blog here or anywhere else to ensure that money never becomes a motivating factor. Money (greed) always seems to pollute everything in human life. But disinformation and deceit isn’t only about the money being made, it’s about their true agenda, where we find extensive examples of hate, racism, violence, control, xenophobia, distrust, paranoia, and control of information and decision-making capabilities – all the same characteristics found in a cult.

Disinformation platforms are engaging in cult-like behavioral control to recruit as many people as possible. Their underlying assumption is if enough people are recruited, they can then enforce their demands upon everyone else. This means what you would think: ultimately, they do not respect the rights of other people while demanding only their rights are “protected”. They strongly disagree with the right of every individual to choose a life that is meaningful to them.

And this is where their agenda and their true meaning falls apart into hate, because many of them now advocate for violence, murder, death, civil war and direct action against any and all detractors that do not support the same goals. They’re control freaks who demand that their worldview is the real one. They could not be more wrong.

I’m not going to bother listing their specific agendas as there are many and they are varied, but they all have these same underlying characteristics. Their agenda isn’t that important anyway (because it’s fringe), but what is important is what these movements actually represent; and how they are recruiting people; and what these people in turn ultimately ‘become’ if they stay with it. These are seriously deluded and deceived people who are engaging in life-wasting, sometimes dangerous and oftentimes completely useless pursuits while emphasizing hate, racism, violence, control, xenophobia, distrust, paranoia and control of information. Their own decision making capabilities even as are normal citizens are severely harmed.

Donald J. Trump exhibits ALL of these characteristics and he’s the President of the United States. He exemplifies them as much as the very worst offenders do in these movements. How he became President at all is directly tied to how these movements persuaded millions of people to believe in their fabricated connedspiracies. Trump came to fully embrace these connedspiracies and spread many of them himself, using them as weapons against his perceived enemies and foes while running for and in office. His cult-followers now look to Trump for the slightest ‘sign’ or twitch that is interpreted to have great meaning and promise.

If you think I am exaggerating here – I am not. To them, EVERY word spoken by Trump, no matter how stupid, nonsensical or rhetorical has import. In turn, his cult-followers then weave a completely artificial and fabricated narrative of the ‘real message’ Trump is secretly conveying to their ‘initiated’ ranks.

Of course, this boggles the sensible and reasonable mind like nothing else really can, but this movement has now grown into the millions who honestly believe in this stuff. They’re seriously disabled intellectually and logically, unable to discern fact from fiction, and represent a danger to themselves and everyone one else because they can’t think. They do more then vote – they buy guns, make plans and some of them, have enacted those plans resulting in violence and death.

In effect, these movements are all engaging in an endless repetition of self-fulfilling activities and claims. They’re constantly egging each other on to embrace the next “story” and the next promised ‘reveal’, clinging to archaic and bizarre ‘signs’ and outrageous unsubstantiated claims as actual facts (without verification). They’re all dwelling in an artificial information bubble of their own creation, unwilling (and apparently unable) to verify and fact-check the claims they’re promoting. And they’re not actually engaging with the rest of the world in any meaningful and instructive ways, taking comfort, solace and protection by ‘sticking with their own’.

As I ponder how so many millions of Americans can be so broadly deluded, I’ve come to realize long ago that these people pose a clear threat to sanity and reason. Unless they recover themselves from the snares they’ve set, they’re probably unreachable (unteachable) and unwilling to come to grips with their alternate reality world-views.

These people vote too, and as we’ve seen, this has enormous consequences to all of us, all around the world. The growth of these movements poses a clear danger to everyone on the planet, no matter what your political views (or not) actually are, because many of these same people now inhabit high offices around the world. Their impaired decision-making has far-reaching and lasting consequences, especially when it concerns facts, science, reason and common sense. Some truly horrific policy decisions are being made by the very same people caught up into these ridiculous connedspiracies.

Ideally, Americans would have learned that connedspiracies are dangerous, deluded and distracting to a healthy, vibrant country, but what I actually fear is that the exact opposite is actually unfolding. These movements and groups believe that they haven’t recruited enough people yet to achieve their goals and will likely expend even more effort with recruitment after their recent defeat. Even a casual perusal of what is now being posted online indicates that this is already occurring. In other words – they didn’t learn a damned thing and cannot admit to any wrong. That’s sounds just like someone we’ve all come to know and loathe. They’ve failed, but this only makes them try harder.

This is the other battle for the soul of this nation and the world that is now unfolding. You can do your part to fight against this too – by rejecting and refusing to tolerate connedspiracies. Don’t allow them into your home or into your lives. Shut them down and walk away. Help those that are seeking help, but don’t engage with idiots.