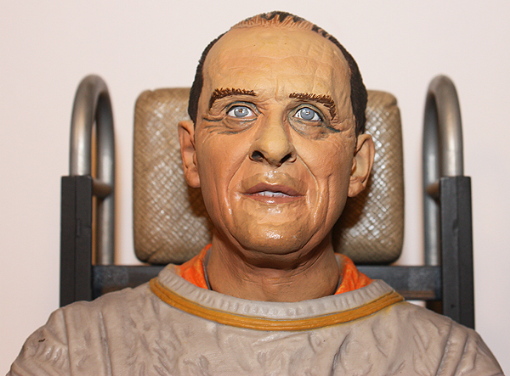 Weird story.  Apparently a cannibal was eating off the face of a man in Miami.  He was naked, although I can’t say if that made him more dangerous or not.

But not to worry, he’s dead.  Shot to death by the cops.  Took a lot of shooting to kill him too.  Reminds me of killing zombies, not always easy.

Maybe there’s going to be an outbreak of rampant cannibal zombie disease?

This happened right outside the newspaper building.  Definitely a good way to make the headlines on your departing exit from this world.

I didn’t want to scare readers with the really gory pictures, so you get Lector instead.

Well, it’s May 27th and the Rapture hasn’t happened yet.  Again.  But we’ve got (a) cannibal instead. Does that count?  What’s next?

Perhaps it’s been postponed, so that humans can do more atrocious acts to one another, adding up all their transgressions and sins to the heavens until the stink of it all reaches the nostrils of God.

Probably.  Except that I would have thought that this would have piled up high enough already.

Just finished reading Lucifer’s Hammer. A cult classic book about the end of the world (and cannibals). Never bothered to read this before, it’s okay as far and “end of the world” books go.  But like most of them, unrealistic as hell.

Few people truly realize how incredibly fast things would fall apart in a catastrophe, or how fast they’d be at each others throats over basic items like food and water.  “Cooperation” would only last as long as the food in your refrigerator lasted.

The power went out here yesterday (again), I gave my fridge about 10 – 12 hours before I’d start tossing things out.  Well, not me exactly, generator backup would have been employed long before that to keep the fresh food edible. And there is a nice food storage to outlast the cannibals too.  Or whatever.

I’ve also read “Lights Out” a while back, another end-of-the-world book. The author utterly fails to put a realistic touch to the story line. There’s a lot of “Hopium” being smoked by the kilogram by the cast of characters.

Most of these books are full of this type of wishful thinking. I think that this makes them rather disingenuous at best.  It does give rise to the Internet b.s. that people seem to embrace.  Mankind, or at least a tiny segment (you of course), will finally band up together, not eat each other and get the ball rolling again.

Or will they?  Why would we believe that?

I’m not so sure. It’s not because we can’t or that we wouldn’t try, it’s because I doubt that those survivors would change very much.  Modern living has virtually “created” an new kind of human that does not understand how to take care of itself, or life on the Earth in a non-damaging way.  We would see a descent into the seventh level of Hell where cannibalism, murder, rape and extreme violence of all kinds would take place (an apt description of how things are right now, if you stop and truly consider the terrifying crimes now taking place). All that we’re missing is the widespread “outbreak” as depicted in these end-time books and movies.

Those alive today will remember too much. Expect too much. And they’ll probably do some very horrible things to see to it that they’ll retain it as long as they can.  This is why I don’t think we can prevent catastrophe.  There is already ample evidence that we’re going to destroy everything, but we still can’t seem to stop ourselves, even if it means biocide.

We could be far closer to such an outbreak of mania then we think. A trigger-event or “flip” within society, economics, the environment or even an external event could take place in the blink of an eye.  Nobody really knows.

I think this is really why our news is so tightly controlled in America. A study by the CIA (I think it was the CIA) revealed that Americans are prone to panic.  Indeed they are.  They could have asked me for an informed opinion on that topic. Unfortunately, I see a LOT of this over the years, dealing with all kinds of panicked and frightened people. There is no reasoning with them either. They are absolutely, positively convinced that the “end is nigh” and that the best response apparently, is panic.

Hmmm. Well, it is all still falling apart, but it’s a process of decline, day by day, year by year. It’s not getting any better either.  Accumulatively speaking, the sum total is pretty bad and it does indeed point to a collapse of a rather significant magnitude as far as humans are concerned. But there is no need for panic.  Keep your 12 gauge ready for the crowd control of cannibalistic zombies, make your preparations and stop supporting the System that is designed to choke the life out of you. That’s about all you can do in reality. Or start removing the problem — something that the “Occupiers” still fail to grasp.  We’re going to protest our way into oblivion, having “done our part” while we watch the Titanic slip beneath the waves.  The last thing anybody is going to see is a hand-made sign held up above the foaming waters, “I’m the 99%!!!”.

Everything else that is happening is pretty much outside of your or my control. We have virtually no effect or influence upon it because we’re still refusing to do what needs to be done.  But panic is a highly contagious disease that spreads like wildfire.  Don’t catch it if you can.

9 thoughts on “Cannibalism Strikes In Florida”