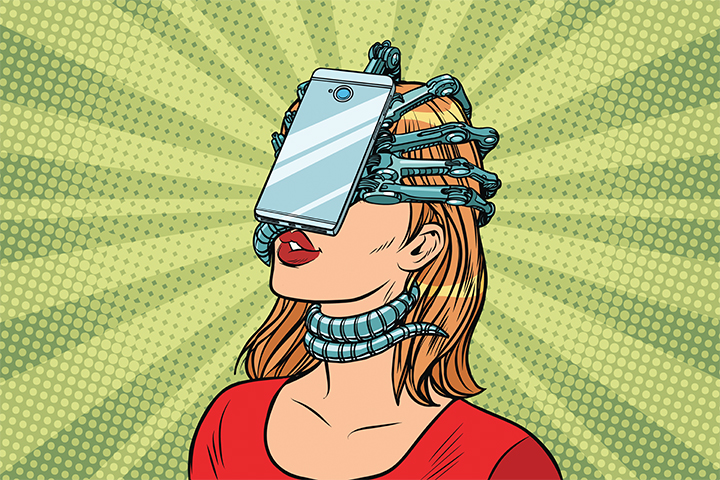 A thoughtful, well-written piece on the insanity of the Internet and how this addictive habit has broken billions of brains.

Our parents warned us the internet would break our brains. It broke theirs instead.

I’m unable to write this good. I’ve warned about the Internet, the StupidNet, and the brain dead cult-followers for many, many years (starting back in the early 1990’s), even before the Internet was publicly available.

I was online very early, which gave me a unique perspective as a heavy user and software developer. It was easy to see how online activity and the content being created was affecting me, and members of my own family. Now, decades later, it’s far worse then even I could have imagined back then.

But I’ve got a rampant imagination and have predicted that the Internet isn’t done with us yet – not even close. The individual online user is now a highly programmed, force-fed connedsumer of misinformation and deception, and it doesn’t even matter where you get your news now, it’s all the same. Your daily senses are assaulted non-stop with click-bait and targeted advertising (which “everybody knows”), but what most people still don’t understand is your news feeds are also targeting YOU.

You’re reading what the algorithms, and the programmers behind them, and the companies paying their salaries, and the people who hire those companies – want you to read. Yeah, it’s really that bad now.

Read the article above. The abduction of minds is ubiquitous and extremely pervasive. Even toddlers are addicted to the screen. I’m seeing this unfold in my own grandson. He’s just three, but he’s definitely an addict already.

I doubt we’ve fully understood the effects “screen time” and the programed mental state that comes with it, has done to the minds of billions. But we’ve definitely changed as human beings – and not for the better. We’re more isolated, disconnected, less compassionate and far more uselessly “informed” then ever. We’re also incapable of thinking clearly, logically or acting with any common sense in large numbers of people. We’re not just “easily distracted”, constantly checking the closest screen at hand during face-to-face interactions, we’re much worse then that. We don’t even grasp the loss of what we once had – real communication with real people.

It doesn’t seem to matter how many times authors make this kind of warning, screen addiction continues to increase. Ultimately, this is our fault – YOUR fault. You didn’t pop out of the womb with a Ipad glued to your forehead. You’re not innately “connected” to bits and bytes and billions of computer algorithms programming your brain, it’s still a conscious choice to spend your life’s energy online, pissing it away pretending your “engaging” with faceless, mostly useless and worthless “friends” (and enemies).

The screen divider in your life is YOUR erection and ultimately frustratingly unsatisfying. So why do we keep doing it? Because we’re all addicted. Little tiny dopamine hits for every “like” and “follower”. And there is little real alternative to this drip-feed. Even if you try to connect now with real people in real life, you’re going to run gob smack into the reality of their screen time and worse: their programmed brains. We’re growing apart, not together.

Everyone has been programmed now to stupidly parrot what they’ve seen on a screen. This should be alarming to all, but it’s exactly the opposite, it’s being accepted by all except a tiny few. The drip-feed of news and stories has been carefully crafted to ensure that independent critical thought is entirely absent from the majority of people. So if you seek face-to-face engagement, you find that it’s like trying to communicate with a zombie. At least, that has been my experience.

I use the phone a fair bit, but I’m talking to people who are addicted to the screen and all the programming that comes with it. They don’t grasp the fundamental concept that they are no longer in control of their own thoughts. What they think and what they say is the result of their programming.

I’ve enjoyed the snot out of my grandson, because he’s full of life and joy and excitement. He’s really human (still), but I’ve also seen how slack-jawed and enamored he has become when staring at a screen. When he’s playing, he reminds me a great deal of my own childhood and the exuberance of life that I once had. But I am worn down, tired, and more then a little frustrated at my own peers and their lack of comprehension and compassion. I’ve spent many, many years attempting to wake people up, but not to the the stupid faketriot bullshit currently in vogue, but to reality.

It’s a pointless, futile attempt, that has resulted in my closing this blog several times in the past, swearing off the very idea of writing another article. But I’ve come back, each time, sometimes many months later, picking up the proverbial pen and paper to publish something new. But it’s not really new, it’s just another perspective, another angle on the same problems that continue to plague humanity. And not one of you give a goddamn. You’re lives are either too busy or your just not interested. You’ve ALL gone absolutely silent now too.

I’m not up on Twitter or Facebook or any other social media trying to build “friends” or a following, because I find that stupid exercise vain, ignorant and extremely self-deceptive. I’m told by my own kids that’s where everyone is now “hanging out”, vapidly ranting and raving and engaging in tiny tweets and even tinier levels of meaningful engagement. Apparently, nobody has the ability to actually read anything anymore if it’s longer then 150 characters in length.

Well, that’s just fucking stupid. How are you EVER going to learn a damn thing from a compressed statement that leaves everything relevant and important and meaningful out? When the very tweets themselves are specifically designed and crafted to encourage a vapid “like”? When comments are scrubbed off from intelligent people because they don’t agree with the original post? You can’t. You won’t. But that’s all by DESIGN. They’re creating stupid people, maliciously, willfully by design.

There is NO technological reason why Tweets or posts are any other online engagement should be limited to just a few characters. I remember 8 bit bytes and I can even tell you WHY those limitations existed. The technology was pretty limited, but not anymore. What’s limited now is the attention span, and the comprehension of people, who have given up their ability to think for themselves, relinquishing their own sovereignty over their own minds, allowing nameless people to do all of their thinking for them. The technology advance dramatically, but the people did not.

Screens, and the technology behind them, and the companies behind that, broke society. Placed into the hands of for-profit corporations and advertisers, what is being presented on the screen, whether mounted to the wall, sitting on your desk, or handheld, is a caricature of reality. A fabrication of futility and empty promise. This is why it is so addictive – because it presents and promises another alternate reality that allows people to escape from the real reality for a time. It’s a virtual reality without the headset.

This is one of the reasons why I enjoy documentaries more then any other “screen time”. It attempts to present something meaningful. I’m not saying this is always correct or the best, but it’s far better then the absolutely useless shit being poured out like a fire hose from the media corporations, filling empty heads with meaningless crap.

If you want to know what one of the major ills with society – it’s the screens. Billions and billions of brains are now broken because nobody had the guts to put a stop to this, and now, it’s too late. It’s unstoppable now. The only way to stop any of it now is to stop consuming it.

You will be different. Able to think more clearly then the rest. More engaged in what matters in life. More time to really think.

And you will find yourself somewhat alone, no longer a part of the crowd and the gossip and the inane vapid conversations swirling around. No longer a zombie, staring slack-jawed at the last post or tweet, sitting silently with friends or family who have lost all ability to actually communicate in person.

I can accept that and have for a long, long time now. My mind is both my greatest asset and the essential part of me that I must protect at all costs. It is even more important then my body. I want the ability to use my mind and apply myself to life’s problems and issues. To be able to not be influenced by the useless, the vain and the vapid. To be able to discern truth from fiction, fact from fantasy.

I’m really hoping I can pass this desire to remain free down to my grandson. If he can keep his mind unshackled, he will be among the very few of his generation. But ultimately the choice will be his, not mine. One day, he may come back here and read these words, I honestly hope he does. I hope he realizes that I only wanted the best for him, and for everyone else. We can be different if we want to, but it has always been up to us to make that conscious choice.