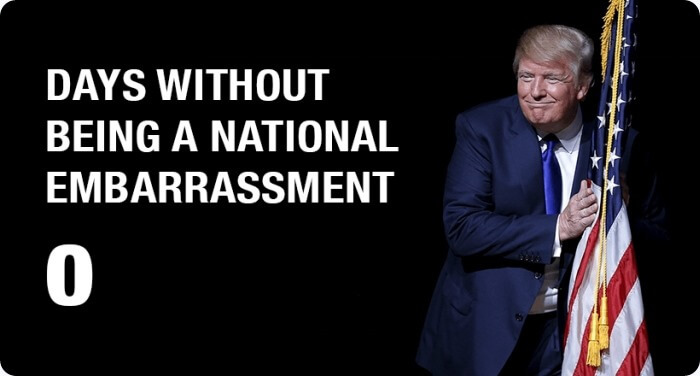 This is a good read: Donald Trump’s Orwellian jamboree

The man-child with no plan, no agenda, no platform, just more of the same rabid bullshit and lies as always. Except now we have a cratered economy, a global pandemic, riots, looting and protests in the streets, people being shot and millions of disgusted Americans. What could go wrong?

Well, everything in fact. Many of us could now lose our very lives to the unleashed visions of vigilante justice and civil war that many of Trump’s fawning fans are hoping for.

I’ve watched a few minutes of the Republican “connedvention” and it’s beyond stupid, dishonest, embarrassing garbage. Do people really fall for this type of dishonesty and rhetoric? What about all the promises and lies and broken things Trump has still failed to fix that he promised would be taken care of (long ago)? Doesn’t ANY of this count?

All these morons preach is fear, paranoia and hate. There is zero unity in their message, zero leadership, zero plans, zero direction for the country. I find it hard to believe that anyone could fall for this utter garbage.

This is what has happened in Trump’s vision of America. Under Trump, while in power and as President, the country fell apart. The idiotic promise that he alone can now fix it – when he cannot fix it now and stands around helplessly complaining all the time, is utterly absurd.

The incredible hypocrisy of the “party” of Trump is simply stunning. The Lincoln Project is hitting the nail on the head, including this one on Mike Pence.

Trump can’t win an honest and fair election, so he’s taken to attacking the Postal service, and now, Pulitzer-prize winning journalists. They don’t give out that award like Trump does with the Medal of Honor. It takes real integrity and skill to earn a Pulitzer.

It’s actually hard for me to believe this sort of thing is even happening here, but this normal for Donald J. Trump – he’s created a cult-of-personality around his gross dishonesty and rabid lies. Mother Jones just released this too: New Hot-Mic Video: What Trump Told His Lawyer When He Didn’t Know a Camera Was Rolling

The parade of liars, sell-outs and shills that the Republican connedvention presented is intended to make voters think Trump is the right man for the job – but he’s anything but. He’s demonstrated and proven himself to be utterly incapable of leadership. He’s been a massive, horrifying, deadly mistake for the country as predicted by many – which has now proven to be true and worse then anyone’s imagination. And in case you didn’t know: America Ranks Dead Last in Pandemic Response. This is all Trump’s fault – don’t let anyone tell you otherwise.

There is an old saying that goes like this: If you keep doing what you’ve always done, don’t expect different results. Trump’s America is falling apart before our very eyes, if he stays in office, it will probably collapse all around us.