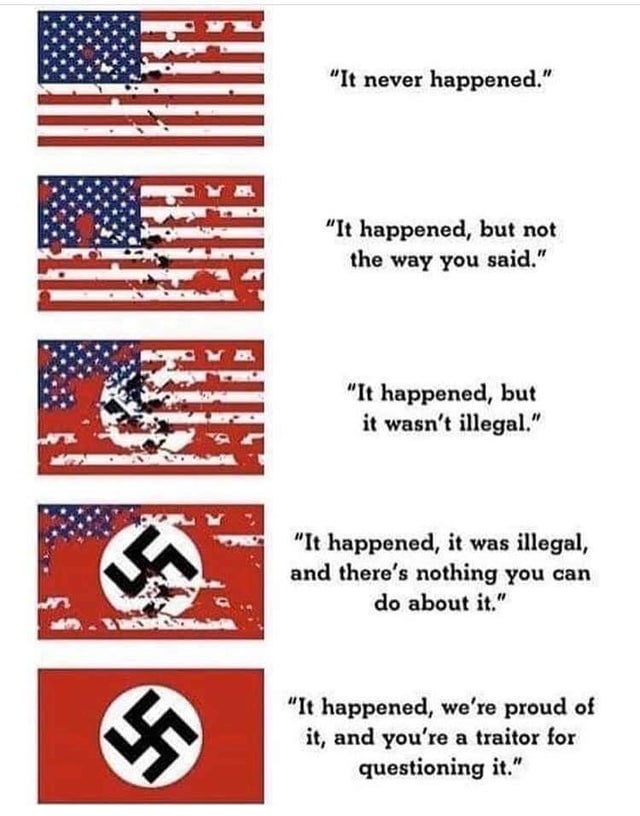 Two important articles that should be read by everyone, especially Americans and anyone who is concerned about the future of America. Both were written by the same author, but I don’t find fault with either one of them.

Historian wonders: Is Joe Biden “a speed bump on the fascists’ march to power”?

There is a dangerous precedent in history on how to overthrow a country’s political system – Germans are keenly aware of this, and the rise to totalitarianism and full-blown fascism.

On Jan. 6, Donald Trump’s Big Lie about a stolen election turned kinetic, and inspired an attempted coup against American democracy. At the very least, Republicans aided and abetted Trump’s coup attempt and the attack on the U.S. Capitol, and some of them are likely co-conspirators in his plot. They have pledged to prevent an independent investigation into the events of Jan. 6, and are continuing their assault on democracy by imposing a new form of Jim Crow-style apartheid across the county. Their goal: winning and keeping power by preventing Black and brown people and other key Democratic constituencies from exercising their right to vote.

As part of their commitment to overthrowing America’s multiracial democracy, the Jim Crow Republicans continue to amplify and weaponize Trump’s Big Lie. Public opinion polls and other research have repeatedly shown that this disinformation propaganda strategy is highly effective. Trump’s cult members remain in thrall to their Great Leader and eagerly await his return by any means necessary, legal or otherwise.

Ultimately, Trump’s coup attempt and the attack on the Capitol were little more than a trial run. With the Republican Party’s rejection of democracy, the events of Jan. 6 will not seem like an outlier or aberration for long. Instead, they offer a preview of how today’s Republican Party will respond when and if it loses future elections.

I recently spoke with Hett about the events of Jan. 6 and his concerns about the health of American democracy in the aftermath of that day. He is a professor of history at Hunter College and the City University of New York and the author of several books, including “Burning the Reichstag: An Investigation Into the Third Reich’s Enduring Mystery” and “The Death of Democracy: Hitler’s Rise to Power and the Downfall of the Weimar Republic.” His newest book is “The Nazi Menace: Hitler, Churchill, Roosevelt, Stalin, and the Road to War.”

In this conversation, Hett warns that American democracy is in crisis and that the Republican anti-democracy strategy is more dangerous to the future of the country than the singular events of Jan. 6. He also explores the similarities between Hitler’s use of the Big Lie and the way Donald Trump and his followers are deploying it today.

Numerous other links to follow in the original article. America is in deep shit with the Republicans who are looking for any way possible to overthrow the country and suppress democracy. Huge strides since the 2020 election have already been made. Make NO MISTAKE about this fact, it’s real, it’s happening right now. The gloves have come off and they are actively organizing, legislating and forcing through repressive changes that will allow full-blown fascism to flourish.

Donald J. Trump is still controlling the party and they have adopted his agenda, techniques and practices to manipulate and control the next election and bring to power a fascist party, controlling both Houses and the White House. We know them by the common term, the Republican Party, but this is NOT the same Republican Party of the past. The Republican Party has embraced fascism as their primary characteristic, utterly abandoning their former conservative values and restraint. The parallels to the Nazi party and Germany and it’s relentless march to fascism (and war) should not be ignored.

I am not “pro-Democrat”, but I’m sure as hell not a Republican. The danger the Republicans now represent to this country is enormous. Nor do I share any of the optimism and “hope peddling” that always seems to get more airtime and attention then pessimism. America has changed in some pretty terrifying ways already, and using just this point of our recent history, it would seem that we will devolve even further.

I’ve been warning about the preparations for civil war, which is still happening here. Angry citizens who still believe that they have been cheated from being able to worship the Orange Cheeto in the White House are deranged enough to advocate and participate in a civil war. Preparations are definitely underway and if the country’s law enforcement doesn’t put a stop to this, I do expect this to occur.

These are the same people (including members of law enforcement and the military) that are actively working against democracy in America, supporting as many anti-democratic actions and activities that they can. Hundreds of millions of dollars have already been donated by these same people to support fascist activities. But they’ve gone much, much further then this, organizing and training to take over the country when they believe the time is right.

Devega has also written Trump regime’s amazing list of crimes keeps getting longer — but we can’t afford to look away which is another important read in its entirety.

Sometimes people refuse to ask a question when they know the answer will be painful. Instead, they convince themselves that not asking the question will make the underlying reality change.

Donald Trump and his regime committed many criminal, evil and otherwise despicable acts in plain sight. Those include, with no attempt to be comprehensive:

Of course, the Republican Party and its followers and propagandists are doing everything in their power to sabotage any efforts to investigate the public and private crimes of the Trump regime. For reasons of political expediency or incompetence, perhaps coupled with pathological weakness, the Democrats seem all too willing to ignore the Trump regime’s crimes in an effort to “move forward” and bring the country back to “normalcy.”

Nonetheless, Trump’s box of crimes, malfeasance and misdeeds is not tightly closed and continues to leak its secrets. Ultimately, a hellscape vision of what America might have become in Donald Trump’s second term will be revealed. This fully Trumpified America would have been far worse than even the most cynical and pessimistic critics could likely have imagined.

I share links to articles and stories found on the Internet for a reason – I want everyone to know about some of the important things going on, and I want there to be a record. The collapse of American democracy is critically important and we are definitely experiencing this crisis. If we do not pay attention and choose remain uninformed and unaware or in denial, we will very likely implode fairly soon. America will become completely unrecognizable and extremely dangerous for everyone (world wide).